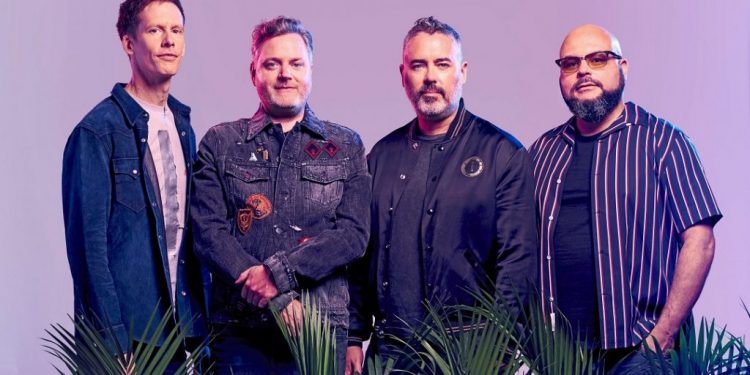 They are back with their 15th studio album titled “Fake Nudes”, which comes out on November 17th. The album title is a play on the term fake news, but it’s also based a long running joke concerning the band’s name.

“It’s a two level joke. One is based on fake news and doing the word play with the title fake nudes. But the reason we like it is for all of our career we heard this joke where people say “you guys are called Barenaked Ladies”, but you’re just a bunch of dudes and you’re wearing clothes”. We never capitalized on that or paid it much attention, but it was too hard to resist with the word play of fake news and you hear it so often these days. It just works. It’s something Ed came up with early on in our recording process. It fit like a glove and that’s why we went with it,” Barenaked Ladies keyboardist Kevin Hearn said.

One of songs off the new album is titled “Lookin’ Up” which is commentary about the current political climate. According to members of the Barenaked Ladies this doom and gloom view of the world is a false narrative and that people must remain optimistic.

“I think if we want to get through and use this current climate for a catalyst for change, then you have to think positive, and you can’t lose hope. I think that’s an important thing to remember. I think it’s easy to be paralyzed by all of the bad news and the doom and gloom. I think this song is saying don’t forget there are other ways to deal with this other than that,” Kevin Hearn stated.

The Barenaked Ladies music video “Lookin’ Up” was directed by Rooster Teeth CEO Matt Hullum. This isn’t the first time he has directed a music video for the band.

“We’ve worked with Matt before on the music video “Odds Are”, and it’s definitely my favourite video we’ve ever done. I’ve always loved the kinship between the Beatles, and George Harrison, and Monty Python. To me that’s sort of how I feel about our relationship with Matt and Rooster Teeth. We share a similar sense of humour and working with him is always fun. Especially when we send him a song and we wait a few days for his ideas. He usually sends us 4 or 5 story ideas of concepts and they’re always enjoyable and it’s just a matter of picking which one we feel we can execute given the other parameters like budget and time and so on,” Kevin Hearn reflected.

The opening track on “Fake Nudes” is titled “Canada Dry” and that song in particular captures the old school Barenaked Ladies sound.

“It shows different qualities in Ed’s song writing, because he has his country influence but also other songs where we like to explore a more contemporary approach like in songs “Lookin’ Up” and “Bringing It Home”. But I agree with you, that song “Canada Dry”, as soon as I heard it reminded me of old Barenaked Ladies sort of acoustic roots songs. We embraced it on that one, we didn’t want to mess with it. We just wanted to play the song,” Kevin Hearn responded.

The song lyrics for “Canada Dry” are authentically Canadian, and perhaps it’s only fitting because the Barenaked Ladies have close roots to their native land.

“We have all chosen to live in Canada, and stay here, and we’re very proud of it. Things (truly Canadian) come to mind, like hanging out with Neil Young at his house when we were doing The Bridge School benefit, that felt good. Working on the Blue Dot campaign with David Suzuki to raise awareness for the right of every person to have clear air and clean water and to have it written in to law. We also built a giant wall out of pancakes, which was pretty Canadian – and with real maple syrup too,” Kevin Hearn recollected.

However, Kevin Hearn’s favourite song off the new album is his most personal; it’s one that he wrote for his daughter.

“I wrote one for my daughter called “Flying Dreams”, that’s my favourite. My most personal song,” Kevin Hearn disclosed.

Just like Kevin Hearn is a family man, so are many of the Barenaked Fans who grew up listening to the band in the 1990’s. They have children of their own. A hit television show has helped expose a new generation to their music.

The hit CBS sitcom Big Bang Theory, which begun it’s eleventh season, starts with the theme song that was written and performed by the Barenaked Ladies. At it’s peak the show was averaging about 20 million viewers a week. This helped expose the band to a newer and younger audience.

“Soon after that show became popular we started getting more bookings at colleges and festivals that catered to a younger generation. We really noticed it and it was a wonderful welcome breath of fresh air. It’s interesting because this band started playing in colleges and that’s where we sort of built our audience. We have our old fans who saw us in college bringing their kids to our shows now. And if they are in their teens they know us and like us from the Big Bang Theory. If they are younger they might even enjoy us for our Snacktime! record so there is a bit of something for everyone. It’s fun in the shows that we can address those different eras. The kids really get off on us being silly and making up stupid songs and more than anyone they get it,” Kevin Hearn noted.

Barenaked Ladies fans in Ottawa can expect to hear some songs off the new album, plus songs off of “Gordon” for it’s 20th anniversary re-issue, as well as their hits and back catalogue.

“It’s a mix of everything for our Ottawa show. I’m holding the new record in my hand. I got a copy of it on vinyl. We also just re-issued “Gordon”, but issued it on vinyl for the very first time for it’s 20th anniversary, so we’re doing a few more songs from “Gordon” than what we usually would. I think our long time fans are enjoying it, and we’re re-inventing some of the songs. We’re going to re-name that song “If I had a $1,000,000” to “If I still had a $1,000,000″. We’re doing 3-4 songs from the new record, and some deep cuts from throughout our catalogues, and the hits of course. It’s a good balanced show. Plus we’re also making up silly songs which we do every night,” Kevin Hearn replied.

On a final note: Kevin Hearn is a survivour of leukemia, and he was also in a band with Gord Downie, about a year before the lead singer of the Tragically Hip passed away from brain cancer.

“I was in Gord’s band for all his Secret Path shows, so I spent a lot of time with Gord. I connected with him musically, but I also connected with him inspired by his mission to promote truth and reconciliation and to tell the story of Chanie Wenjack. I was also able to connect with him as someone who experienced cancer, and someone who has faced his mortality, and know how it can effect one’s creative self too. I really love Gord, he was a dear friend. It’s a devastating loss, but he’s left us a beautiful body of work, but also inspired many people to carry on his good work,” Kevin Hearn added.

“One thing I tell people who are facing cancer, in the same sense where we started this conversation, it’s important to be hopefully, and not lose hope in the face of doom and gloom. The same applies in my view when you’re fighting cancer, is that you have to keep thinking positive because your body needs that. They are connected, and your body needs your mind to keep positive and believe you can get through this,” Kevin Hearn concluded.

The Barenaked Ladies Ottawa concert takes place at the National Arts Centre on Wednesday, November 29th. The show begins at 8pm and tickets can be purchased via Ticketmaster online. Ron Sexsmith is opening the show.

Agree to disagree - Keyboard Warriors do make a difference