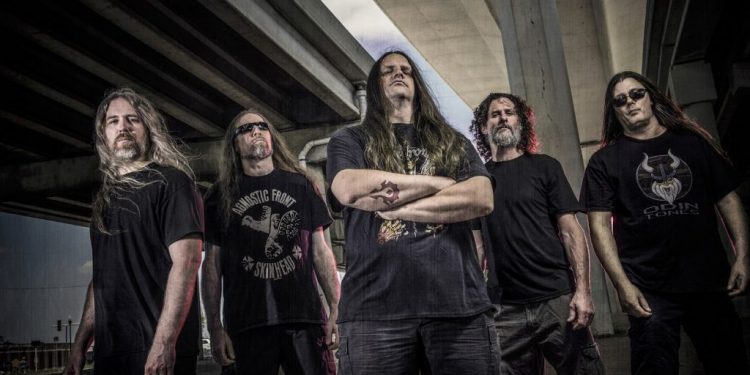 “It’s a collection of 12 killer songs we feel that we’ve written. I think it’s a culmination of the best of Cannibal Corpse and all of our work. We’re a band going on 30 years, with exactly 14 albums. I think over the years we’ve gained more experience. We’ve always tried to be better musicians, and better song writers. I think for this album things have come together smoothly with cool memorable Cannibal Corpse songs here. We’re very excited for it. We feel it’s some of our best material ever written. We’re looking forward to releasing it and for fans to finally hear it,” drummer Paul Mazurkiewicz said.

Back in September, Cannibal Corpse premiered a new song from their album titled “Code of the Slashers”. The third song off of “Red Before Black” was written by Rob Barrett.

“Rob wrote that songs and the lyrics for it. His inspiration with the rift – he was thinking Black Sabbath with that opening. Not that it sounds like Black Sabbath, but it has that feel from that era. The song itself ended up being a really great song. While lyrically he was going for a gang vibe,” Paul Mazurkiewicz stated.

Paul Mazurkiewicz wrote the song lyrics for half of the songs on “Red Before Black”.

“Yes, on this album I wrote six songs lyrically. I’m there helping with the arrangement and all that. I’m the common denominator in the music department. Everyone is writing their own songs, and I’m there holding them together, and I’m writing a song here and there myself. I wrote the song “Destroyed Without a Trace” on this album. I collaborated with Rob, but it was primarily my doing. So I have a heavy hand in the band, but everyone has their part, and they all have a heavy hand in it in a sense. I write a lot of lyrics and I’ll be on call if I need to write a song for whoever – Alex or Rob. If I’m more involved in a song, I’m going to write the lyrics,” Paul Mazurkiewicz remarked.

Cannibal Corpse have come under criticism for their so-called offensive lyrics from various US politicians including Senator Bob Dole (who was the Republican Presidential nominee in the 1996 election) and US Senator Joe Lieberman (who was the Democratic Vice Presidential nominee in the 2000 election). Despite the objections by various politicians and advocacy groups, the band never got censored or dropped off of their label. Instead it turned out to be good publicity for Cannibal Corpse.

“It’s all ridiculous. It ended up being good publicity. We were shocked Bob Dole mentioned our name. When it all went down and they said that the music today is corrupting the youth of America and we must stop this music. It was all rap bands, when 2 Live Crew was huge, and all these bands selling millions of records, and Cannibal Corpse. I’m like you got to be kidding me, really, we’re getting lumped in with this. Alright, people are talking about the band more, and we’re getting good publicity. Inevitably what happened was nothing. What are you stopping? Music goes on. This whole PMRC (Parents Music Resource Center) and censorship labels are gone. All those bands getting censored are still here. It ended up being great publicity when your band is on the nightly news and as the top story on CNN and USA Today. People are talking about us, so thanks Bob Dole,” Paul Mazurkiewicz opined.

Cannibal Corpse also had a brief cameo appearance in the 1994 movie Ace Ventura: Pet Detective starring Canadian-born actor Jim Carrey. It exposed the band and the genre of death metal to millions more people and it helped grow their fan base further.

“It was a cool experience. We were doing fairly well at the time, and to be in a big movie that did so well, and more people are going to be seeing it. After we started touring again after that movie came out, some people were saying hey we didn’t know what death metal was and never heard of Cannibal Corpse until we saw you in the movie and we’re big fans. It propelled us a little bit more. We were being seen by millions of people and it was a cool thing,” Paul Mazurkiewicz recollected.

Alex Webster along with Paul Mazurkiewicz are the two original members of the band still with Cannibal Corpse. They have played along side each other in the band for nearly 30 years.

“Alex and myself are the two original members. It’s great, it’s the same as it always was – us kids from Buffalo playing our music. I’ve known him for probably 33 years. It’s going well, we keep going. We obviously have a good working relationship or we wouldn’t have made it 30 years. He’s a great guy, and we do our thing, and it’s as smooth as can be,” Paul Mazurkiewicz replied .

Their debut album “Eaten Back to Life” was released by Metal Blade Records in 1990. The band has been with the label ever since. Brian Slagel was a fan of the band, and the label gave Cannibal Corpse creative control over their own music.

“Metal Blade were the ones who wanted Cannibal Corpse. When we were starting out, we just wanted to get our foot in the door. We knew Metal Blade, we sent a tape to Metal Blade. In the late 80s you have a handful of labels you’re going to send your tape to like Metal Blade – the heavy labels that might sign a band like us. When we did that and sent our tape to ten labels we got one reply back and it was from Metal Blade. They wanted us on the subsidiary Death Records, but still Metal Blade. That fell apart, and we just ended up being on Metal Blade. We were wanted by somebody. It wasn’t like we got to choose from contracts offers. Either sign with Metal Blade now, or maybe something comes up later. When you’re kids and you’re excited and you got an offer you’re going to take it. Luckily for us it ended up being a great label to be on. We are treated very well. We’re able to have complete creative control. Brian Slagel loved the band, and that’s why he signed us to Metal Blade. When you got the owners support that’s special. 30 years later and some of the same people are at Metal Blade, and we’re friends now. It’s more than just a business relationship. The fact that we had creative control throughout our career, that was huge. Brian’s label was growing and growing and we got our albums distributed all over the world. I’m glad that it worked out the way it did,” Paul Mazurkiewicz said.

Long before Cannibal Corpse, and even before he even had a drivers licence, Paul Mazurkiewicz started playing the drums. He picked up a Kent drum – a double bass kit – around 1985 when he and friends wanted to start a band.

“I remember when we sat down as kids and fans of music and listening to heavy metal, and finally decide we got to create our own music, we got to form a band. I remember me and Chris Barnes and my buddy Rich – we were just going to start a band. That would have been around 1985. Rich is going to get a bass, Chris is going to sing, we’ll find a guitar player, and I’ll play drums. It probably would have been 1985 when I got my first drum kit. It was an older kit, like from the 60s, and a Kent model. Kents were made, I believe, in western New York. It was an old tiger stripe kind of finish. It was old, the hardware was from the 60s. Found it in the swap section of the newspaper in Buffalo. I had to have a double bass kit, and those seemed hard to come by. We found this one for $200 – double bass, two toms, and some minor hardware. I remember my mom took me, because it was 1985, and I wasn’t driving yet. My mom was driving a Pinto at the time. We got the kit into the Ford Pinto, took it home, and put it in the basement and I started hitting those things. That was my first drum set, the Kent,” Paul Mazurkiewicz recalled.

About 3 years later some members of Tirant Sin and Beyond Death would form Cannibal Corpse – and the rest is history.

The opening song on “Red Before Black” is titled “Only One Will Die”. It’s a really energetic and fun song perfect to open up a concert.

“I’m really liking “Only One Will Die”. It’s a very fun song to play, and so is “Shedding My Human Skin” – a very fun song. “Only One Will Die” is the opening song on the record, and I think that one will get the crowd riled. That’s going to make it extra fun when you got that energy behind it. When you’re having fun at rehearsal and at your practice space, just imagine playing it live and feeling that energy. I’m looking forward to Friday and seeing how this all transpires,” Paul Mazurkiewicz concluded.

Fans of Cannibal Corpse can order the new album online or find a copy at their local record store.