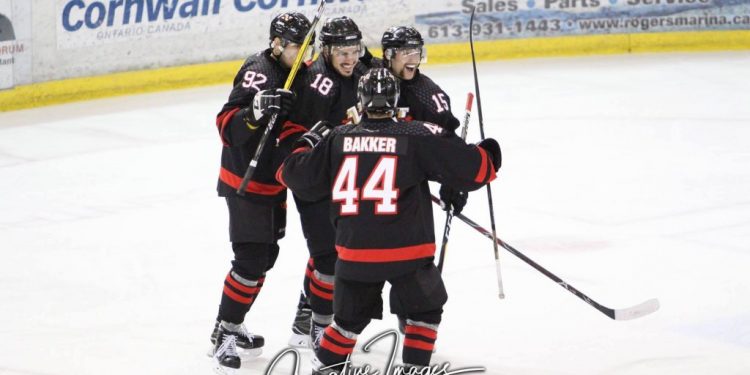 CORNWALL – The Nationals stretched their winning streak to three games with a 5-3 win over the Watertown Wolves on Sunday evening at the Civic Complex.

With the victory in front of an announced gathering of 678, head coach Joel Trottier’s squad improved to 3-0-1 on the season.

Brandon Vuic gave the Nationals a 1-0 lead 5:55 into the game with a powerplay marker. Vuic, parked in front of the net, was the beneficiary of a slick pass from captain Ahmed Mahfouz.

The speedy Maxime Guyon gave Cornwall a 2-0 lead at 11:34 of the first. Guyon, who was sprung loose on a breakaway by Mahfouz, was originally stopped by Watertown’s Bobby Bowden but then buried his own rebound with a great second effort.

Mahfouz showed his incredible vision 69 seconds into the second when he found a wide open Eric Witzel, who scored his first of the season to give the Nationals a 3-0 lead. Twenty-eight seconds later, however, Matt Caranci beat Sebastien Dube-Rochon, who was making his second start in as many nights for Cornwall.

At 8:24 of the second, Witzel’s one-timer tricked past Bowden for his second of the contest as Cornwall took a 4-1 lead.

Then, Cameron Dimmitt, on a breakaway, beat Dube-Rochon with a perfectly placed wrist shot with 5:45 to play in the second. Caranci, with his second of the evening, brought the Wolves to within a goal with a powerplay goal with only 4.5 seconds left in the middle frame.

Clinging to a one-goal lead, the Nationals put their work boots on in the third period. Cornwall’s Tom Tsicos outmuscled a Watertown defenceman to bury Brandon Gilmour’s rebound 3:54 into the third.

The Nationals are back in action next week with three FHL contests. Cornwall travels to Port Huron for games on Friday (7:30 p.m.) and Saturday (7 p.m.).

The Nationals hosts the North Shore Knights on Sunday, Nov. 26 at 7 p.m.