by Editorial Board
in News and Announcements, Sports
Reading Time: 2 mins read
25 0 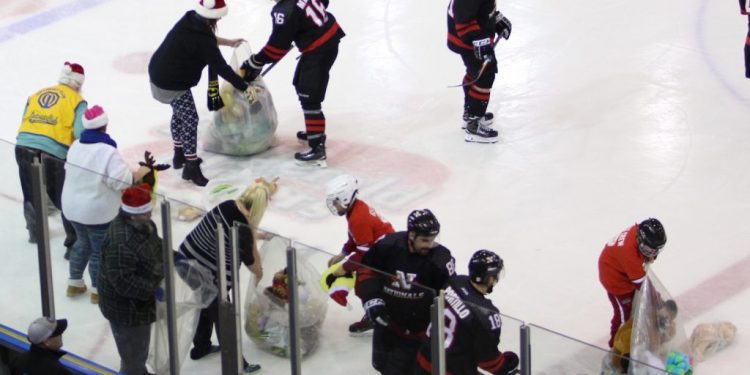 CORNWALL – The Nationals went toe-to-toe with the defending champion Danville Dashers this weekend at the Civic Complex and came out with a weekend sweep.

Maxime Guyon scored the game-winning goal late in the third period and captain Ahmed Mahfouz scored twice to lead Cornwall to a 6-5 victory over the Dashers on Sunday afternoon at the Civic Complex in front of 618 fans.

With back-to-back victories over the Dashers, the Nationals improved to 7-2-0-2 and sit first overall in the Federal Hockey League.

Danville opened the scoring 1:44 into the contest on a trickler that ricocheted past Sebastien Dube-Rochon. The goal was eventually credited to Jimmy Soper.

The Teddy Bear toss goal was scored by Justin Portillo, who took a pass from Brandon Vuic and wired a perfectly placed wrist shot past Danville’s Aaron Taylor. More than 200 teddy bears were tossed onto the ice.

Moments later, at 11:04 of the first, Nationals Mahfouz teed up a slap shot that chased Taylor from the game in favour of Gregory Hussey. Just 54 seconds later, Daniel Martin welcomed Hussey into the contest with a wrist shot above his trapper to give Cornwall a 3-1 lead.

The Dashers responded however on a Sean Reynolds marker with 6:32 to play in the opening period.

Mahfouz gave the Nationals a 4-2 lead with 4:39 to play in the middle frame with his second of the afternoon. Mahfouz took a pass from Eric Witzel and tucked a nifty back hander past Hussey.

Ben Boukal riffled a shot from the point past Dube-Rochon 59 seconds into the third for a powerplay marker that brought the Dashers to within a goal.

The Nationals restored their two-goal lead when Portillo sprung loose the hulking Antoine Guimond, who beat Hussey at 6:17 of the third.

But Danville’s Seth Ronsberg beat a sprawling Dube-Rochon with 7:28 to play before Soper tapped in his second of the contest exactly one minute later to level the score at 5-5.

With the Nationals on the powerplay, Guyon picked up the loose puck in the slot and fired a wrist shot right under the crossbar to give the Nationals the lead for good with 3:33 to play.

NEXT WEEKEND: The Nationals travel to Watertown on Friday, Dec. 15 to take on the rival Wolves. The following evening, Saturday, Dec. 16, Cornwall hosts the North Shore Knights at the Ed Lumley Arena in the Civic Complex. The puck drops at 7:30 p.m.