Nats come from behind to knock off Knights

by Editorial Board
in Sports
Reading Time: 2 mins read
28 0 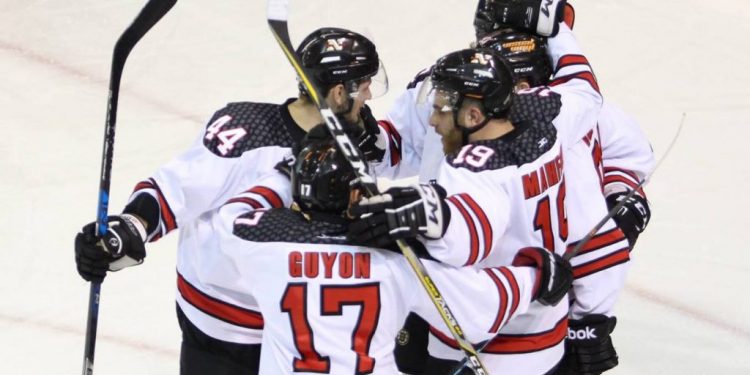 CORNWALL – The Nationals kicked off the New Year with a come-from-behind victory on home ice Sunday night. The first-place Nationals skated to a 5-4 win over the North Shore Knights at the Civic Complex in front of 651 fans.

Captain Ahmed Mahfouz’ blast with 1:32 to play was the difference for Cornwall, which improved to 13-4-0-2.

Frankie Hart beat Brandon Billie, who got a rare start in goal for the Nationals, with a backhander for a powerplay goal at the 10-minutes mark of the first. Matyas Kasek’s wrist shot then beat Billie with 1:32 to play in the first on another North Shore powerplay. Cornwall outshot North Shore 15-5 in the first but trailed 2-0 after 20 minutes of play.

The Nationals finally beat North Shore goaltender Christian Pavlas for the Warm Up Cornwall goal in the second period. Mahfouz found a wide open Maxim Guyon, who tucked a wrist shot under the crossbar at 3:52 of the middle frame.

As soon as the puck hit the back of the net, fans threw toques, mitts, scarves, jackets, etc. onto the ice. All items were donated to Warm Up Cornwall.

The Knights restored their two-goal lead on a controversial goal by Lukas Sladkovsky at 7:14 of the second, as the puck appeared to be batted in by a high stick. It was North Shore’s third powerplay marker of the game and the goal chased Billie from the Cornwall crease in favour of Sebastien Dube-Rochon.

Guyon then brought the Nationals back to within striking distance with 2:25 to play in the second with his league-leading 24th goal of the season. The talented forward absolutely riffled a wrist shot from the high slot to beat a puzzled Pavlas.

Cornwall came out flying in the third and Mahfouz beat Pavlas just 26 seconds into the period to level the score at 3-3.

But, a fourth powerplay goal of the night for North Shore, this one by Patrick Porkka, gave the Knights a 4-3 lead at 5:16 of the third.

Tommy Tsicos was sprung loose on a breakaway and beat Pavlas through the legs with 8:39 to play in the third to set up the Mahfouz heroics.

The Nationals are back in action on Saturday, Jan. 13 when the rival Watertown Wolves visit the Civic Complex for Cornwall Royals night. The puck drops at 7:30 p.m.

The 2017 Top Ten Citizens of the Year