The 2017 Top Ten Citizens of the Year 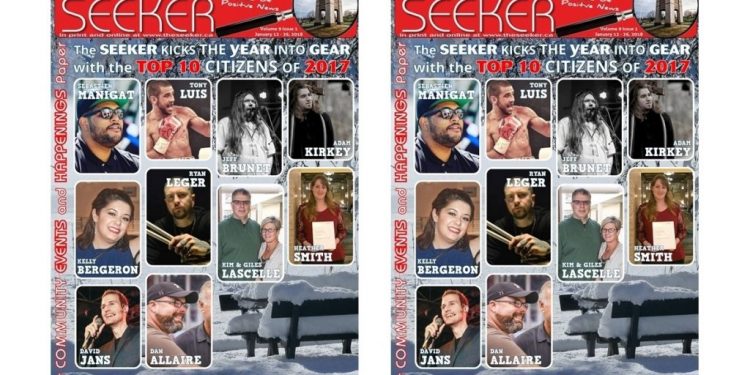 Cornwall Ontario — Here are The Seeker’s Top Ten Citizens of the Year for 2017. We have many outstanding citizens that deserve acknowledgement, more than a Top 10 list worth. However, we hope this list puts a spotlight on at least some of the people who make this community amazing. In no particular order here is our list:

1 – Tony Luis, who brought professional boxing back to Cornwall with 3 stellar events, and won the North American Boxing Association Lightweight title in front of approximately 4000 fans at the Civic Complex. Way to go Tony!

2 – Giles and Kim Lascelle, owners of the Ontario Hockey Academy, who are celebrating 10 years in business. After a devastating fire a year and a half ago, they didn’t give up, and they rebuilt. OHA and it’s students do volunteer work within the community including the Trick or Treat for Agape Fundraiser, and the Sparky Toy Drive. Soon, 7 OHA alumni are expected to participate in the upcoming Winter Olympics in South Korea. Another former alumni was drafted to the NHL in 2017 and won gold at the World Juniors last week. Also, a current OHA student is Harvard University bound. Way to go Giles and Kim on creating such a successful program!

3 – Magician David Jans has had an incredible year, from playing live on CTV Ottawa Morning Live television program, to performing at Pommier Jewelers 80th anniversary party, plus many sold out rooms including NYE at La Maison Tavern. He also performed street magic in downtown Montreal at the Canada Grand Prix, as well as in downtown Cornwall for Food Fest. He was also featured in Cornwall Living Magazine. Furthermore, as an actor he played an extra on the Jean Beliveau biography mini series that aired on the French History Channel. Way to go David!

4 – Kelly Bergeron, who is the founder of Code Heroes and also part-time Executive Director The Cornwall Innovation Centre, has been making a huge splash in Cornwall. Her leadership role in both entrepreneurship and technological education is commendable and noteworthy. She also participated in the Hack to the Future event that featured Keynote guest speaker Sage Franch from Microsoft. Way to go Kelly!

5 – Local filmmaker Adam Kirkey had his film ‘Sir John A. And the Curse Of The Anti-Quenched’ premiere at The Kingston Canadian Film Festival this past March. The movie features John Dunsworth (famously known as Mr. Lahey on Trailer Park Boys), Spencer Rice (of Kenny vs Spenny), Paul Spence (‘The Deaner’ from the cult classic Fubar), and Cornwall born actor Brock Terriah. It was an excellent movie, and a great accomplishment! Way to go Adam!

6 – Heather Smith, a member of 325 Cornwall Kiwanis Royal Canadian Air Cadets, was awarded the gold standard for the Duke of Edinburgh Award, which was present by Prince Harry at a ceremony in Toronto. Heather is now a graduate of Queen’s University with a Bachelor of Music and has opted to continue her graduate studies abroad in Germany at the University of Heidelberg. Way to go Heather!

7 – Sebastien Manigat, who is the festival director of The Seaway Summer Beer Fest . Despite, the rain over 2500 people attended the beer festival which included Juno Award winning and platinum album selling headliner Classified. His other work with the Seaway Food Festival includes Cornwall Restaurant Week, and the Cornwall editions of La Poutine Week and Le Burger Week. Way to go Sebastien!

8 – Ryan Leger is the drummer of Hundred Suns. Their 2017 album The Prestaliis ranked #133 on the Billboard Top 200, #10 for Hard Music, #14 for Heatseekers, #25 for Hard Rock, #40 for current rock, and #85 for Rock. Ryan Leger, who’s resume includes Every Time I Die, Dead and Divine, The Salads, and Skye Sweetnam, has joined forces with Norma Jean’s Cory Brandan and Dead and Divine’s Chris LeMasters to form Hundred Suns. The band also had a successful North American tour in 2017 playing many sold out shows. Way to go Ryan!

9 – Jeff Brunet of Alkaline Entertainment booked approximately 20 concerts in 2017 keeping music alive in this city. He booked acts such as Lukas Rossi at La Maison Tavern. He also worked with Jason Mitchell and Davey Bedard as a booking agent for Cornwall Music Fest which featured Michel Pagliaro, Barstool Prophets, The Box, and Darby Mills of the Headpins. Way to go Jeff!

10 – Dan Allaire, for his work on the radio, as well as community volunteering. Highlights of 2017 include a charity boxing match vs. David Murphy, being jailed for a Beyond 21 fundraiser, and a Celebrity Chopped fundraiser for Baldwin House, and the United Way Changing Lives fundraiser. Way to go Dan!

Honourable Mention: Paul DesLauriers and The Paul DesLauriers Band who won four awards at The Twentieth Annual Maple Blues Awards ceremony took place at the Royal Conservatory of Music in Toronto Ontario. Paul DesLauriers is one of the most successful and decorated musicians to ever come from Cornwall. Way to go Paul!

The Seeker Life Time Achievement Recognition Award: City Councillor Andre Rivette, who is retiring in 2018, and has served the City of Cornwall for over 18 years. His work ethic, and his willingness to help ordinary people with municipal issues, has been a credit to the local City Council. Way to go Andre!

Congratulations all and thank you for helping to make our community amazing!

The Book Nook: Review of Endurance by Scott Kelly