by Editorial Board
in Editorial
Reading Time: 2 mins read
27 2 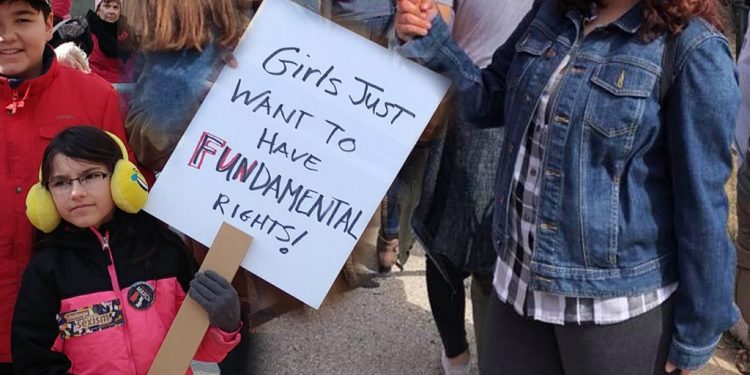 Last Saturday, my family and I attended the women’s march on Toronto.

We were visiting the big city with the kids as we attended a basketball game the night before and were looking to do something fun before returning home. As I was browsing through potential venues, I came across an ad for the march and casually pointed it out.

My husband, an American Citizen and strong activist, immediately pushed for us to partake in the event. On the day marking Trump’s inauguration and the first women’s march on Washington, where hundreds of thousands of women protested inequality and Trump Style politics, hubby wanted to show solidarity not only to women but to all Americans who didn’t vote to put the orange orangutan in power.

Participating in a demonstration is not exactly my or the kid’s idea of fun so at first, I wasn’t too enthused. The kids started protesting the protest trying to prove a point. “See daddy? Protests don’t work,” they said after seeing their march was getting them nowhere. Kids! I told them our family was a dictatorship, not a democracy and got everyone ready for our adventure. By 11 a.m., they had already learned their first lesson on governments and politics and had a new found appreciation for democracies.

This year’s march, on top of protesting Donald Trump and his administration’s policies on immigration, healthcare, racial divides and other issues, was fostering new themes and urging women to not only register to vote and vote, but also run for office. Women need to gain more seats at the political table, and this being an election year in many municipalities, as well as provincially, the message was loud.

The #MeToo movement also served to fuel the march, and as I recently wrote and shared my #MeToo story, it only made sense for me to stand alongside my fellow women.

We picked signs and prepared to stomp on Toronto’s streets. As we listened to the empowering speeches, I couldn’t help but look lovingly at my kids who by now had totally geared into activism mode. The apple doesn’t fall far from the tree.

Listening to my 13 year old son proudly chant “This is What a Feminist Looks Like,” I felt hope. Hope for future generations. Hope for my daughter. Hope that somewhere in the near future, girls will no longer have to fight for equality or respect; equality and respect will go without saying.

When I got home, I saw the posts from friends around the nation who had marched in their respective cities. My 17-year-old niece had gone to Austin, Texas to show her support. As I looked at her picture, I noticed that she was bearing the same sign my daughter had picked up. Cousins, miles apart, in separate countries but united by the same cause, had the very same thing to say to the world. “Girls just want to have FUNdamental rights”.
So even though I wasn’t up for it at first, I’m glad the husband insisted. We made history that day. And the kids got a lesson that they would never learn in school: how to advocate for their own, and every oppressed human being’s rights.

“Never be afraid to raise your voice for honesty and truth and compassion against injustice and lying and greed. If people all over the world…would do this, it would change the earth.” ―William Faulkner