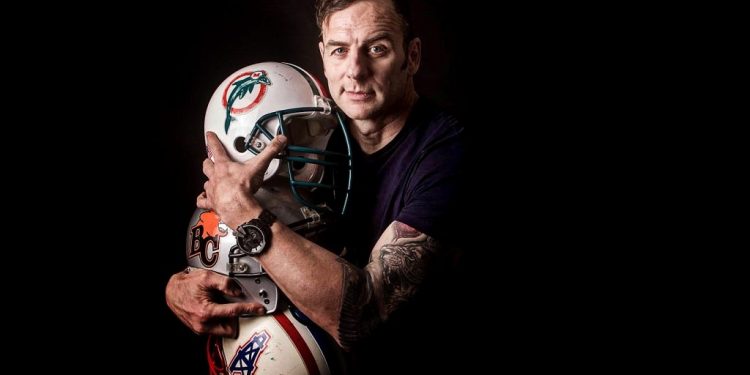 In his youth, Mark Hatfield and his older brother Bill watched the Miami Dolphins take part in the 1985 Super Bowl. Bill said to Mark, Dan Marino is doing so well at a young age, someday you’ll play in the NFL too. Months later, his brother died of a heart condition, and Mark made it his goal to play in the NFL one day.

Although he is now a comedian, as a football player he wasn’t the joker or the prankster in the locker room.

“I was definitely not the jokester. I was playing a part. My job was to smash into people, and literally move people around with brute force and technique. Therefore, the more scared people were of me, the easier my job. So, in the change room, I tried to be intimidating. Also, I wanted to be the hardest worker out there,” Mark Hatfield reminisced.

Mark Hatfield’s funniest memory as an NFL football player was his first practice with the Houston Oilers after a Mexican lunch.

“My funniest memory in the NFL was my first practice with the Houston Oilers after lunch. We had a big Mexican feast catered, and my Canadian body parts were not used to it. We were in a big circle stretching, arms over head bending to the left, then bending to the right and then PLLLLT – it was hilarious,” Mark Hatfield recalled.

A concussion cut Mark Hatfield’s career short; however, he made the successful jump from football to entertainment with “The Retired CFL Guy” segments on Comedy Network’s “Game Face” series.

“I made a video for TSN’s Off The Record TV show about hitch hiking to Toronto to do the show. The guys from the Comedy Network saw it and asked me to be part of their show,” Mark Hatfield recalled.

After that, Mark Hatfield hosted the “Big Bad Sports Show” on Rogers.

I approached Rogers with a TV show idea similar to my ‘Retired CFL Guy’ character. They were looking for a host for a show they were about to start called BBSS. It was a natural fit, so I did it for 2 years. It was lots of fun,” Mark Hatfield added.

Mark Hatfield was also on TSN’s “Off the Record with Michael Landsberg. He learned a lot form that experience.

“The best part of doing OTR was meeting all the people at TSN and the great guests. It made me realize there’s so much to learn from other people’s stories. It’s why I started my podcast ‘The Hatfield Trip Podcast’ on iTunes and YouTube. It’s a ‘field trip into the lives and minds of interesting people’. These conversations have changed my life,” Mark Hatfield replied.

In addition to being a comedian and media personality, Mark Hatfield is also a firefighter in Ottawa.

“Yes, I love firefighting. It is similar to pro sports in that we train hard, work as a team, and then perform under stress for a common goal. It’s an amazing profession that I am most proud of,” Mark Hatfield stated.

Mark Hatfield is looking forward to performing at Cornwall’s Boston Pizza for the launch of Yuk Yuks there.

“Every time I get on stage I want people to feel good, to enjoy themselves, forget about their troubles, and realize that we are all in this together. My goal is to make sure they leave with a happy positive feeling,” Mark Hatfield concluded.

Tickets are on sale now at Boston Pizza for $15, and the show February 11th starts at 5pm. Cornwall’s Boston Pizza is located at 1234 Brookdale Ave.

The Vagina Monologues happening this Saturday