by Editorial Board
in Columns, News and Announcements
Reading Time: 2 mins read
34 1 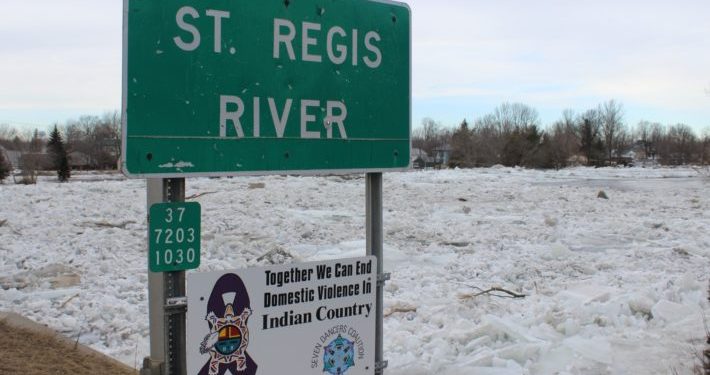 AKWESASNE – The Saint Regis Mohawk Tribal Council has declared a State of Emergency within the Territory of Akwesasne due to severe flooding along the St. Regis River.  The Tribal Council signed Tribal Council Resolution 2018-08 today, due to the imminent threat to life and property because of the high water levels and ice jams.

“The declaration of a State of Emergency is pursuant to the inherent power of the Tribe to act in the best interest of tribal members,” noted Tribal Chief Eric Thompson. He added, “We take immense responsibility in protecting public safety and the welfare of all community members, particularly those that are currently being impacted by flooding.”

The State of Emergency in Akwesasne was declared around 5:00 p.m. on Thursday, February 22, 2018 and will remain in effect during the duration of the severe flooding. It renders all available tribal resources and assistance vital to preserve and protect the security, well-being and health of local residents located in flood areas.

“We want all of our community members to please be safe during the flooding,” stated Tribal Chief Beverly Cook. She added, “Residents being impacted by the high water level should exercise caution and evacuate, if you have not already done so.”

On Wednesday, February 21, 2018, the Tribal Council signed Tribal Council Resolution 2018-07 to order a 72-hour precautionary evacuation for the areas along the St. Regis River, which remains in effect until Saturday, February 24, 2018. While, the order is not mandatory, it covers an area east and west of the St. Regis River from Helena/North Road to the northern border of the Tribe’s jurisdiction.
Since that time, the water level has remained stable and ice jams have remained in place; resulting in the National Weather Service to extend the Flood Warning until 7:00 p.m. on Thursday, February 22, 2018.  When the warning is lifted, residents in the flood area will not be able to immediately return as the water level and ice jams begin to recede.

“We continue to encourage community members to please be prepared for any type of natural hazard,” said Tribal Chief Michael Conners. He added, “Please follow instructions provided by our community’s first responders and develop your own family’s emergency preparedness plan, which may require being unable to return to your home for several days.”
A Unified Incident Command Post is in place to take the lead role in monitoring the high water levels and ice jams along the St. Regis River, as well as assist residents impacted by the flooding. It is comprised of the Tribe’s Emergency Planning Office, Saint Regis Mohawk Tribal Police Department and the Hogansburg-Akwesasne Volunteer Fire Department, with support from county and state agencies.

The Unified Incident Command Post will provide further information and instructions in response to the flooding on 97.3fm CKON, the Saint Regis Mohawk Tribe’s Facebook page and on Akwesasne TV.

For assistance with evacuations, please contact the Saint Regis Mohawk Tribal Police at (518) 358-9200 or Franklin Country Emergency Services at “9-1-1.”