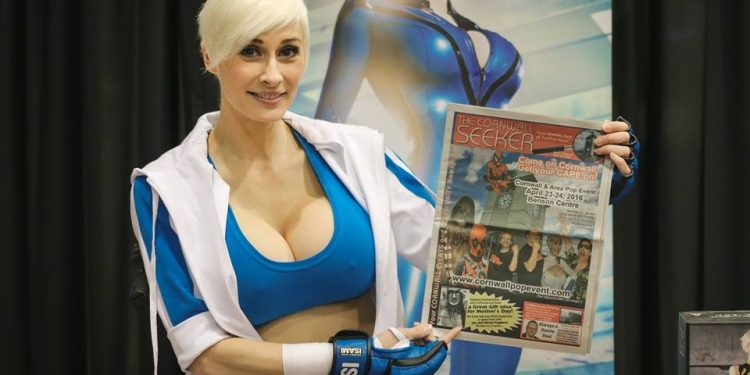 Cornwall, Ontario – Marie-Claude Bourbonnais is a French Canadian cosplayer, glamour model, and seamstress. She has over half a million followers on Facebook, and she is going to be a guest at the Cornwall and Area Pop Event (also known as CAPE) which takes place on April 21st and 22nd, 2018 at the Benson Centre in Cornwall.

Her resume includes being the cover girl on magazines, having a six page spread in FHM magazine, being the face of print advertising for New York Fries, being featured on the front cover of the Ottawa Sun, being an actress on the Heroes of the North web series, and also being a guest at comic conventions all across the globe.

In 2009, while modeling, Marie-Claude Bourbonnais tried something different during a photoshoot, and this would change the course of her life. She modeled in a costume she made and it went viral.

“Back in 2009, I did a photoshoot with a photographer friend of mine. I wanted to do something different for a change and instead of doing a glamour photoshoot as usual, I decided to take a costume in pictures. I made the costume of Frost from the video game Mortal Kombat. I had always been a huge fan of that game and as a seamstress, I had been sewing for other people all my life. I wanted to sew something for myself for once. It was a photoshoot just for fun,” Marie-Claude Bourbonnais reminisced.

“When the photographer posted the pics online, they were extremely popular. Even more popular than all the previous glamour pics we had taken together. People’s reaction to the Frost pics intrigued me and making some searches, I found out that dressing up as a character from a movie, an American comic book, a Japanese anime or a video game was called cosplay – and that it was a popular phenomenon all around the world. I had never heard of that before. Cosplay wasn’t very well known in the province of Québec back then, and that is how I discovered cosplay, thanks to the Frost pics,” Marie-Claude Bourbonnais added.

According to Marie-Claude Bourbonnais, it’s costume making that brought her into cosplay, and it’s the costumes that come first for her.

“Since I discovered cosplay through the making of a costume, it’s costuming that brought me to cosplay. While most cosplayers are fans of specific characters, they are not necessary costumers, but they do what they can to put a costume together to bring that character that they like to life. As a professional from the clothing industry, the costume comes first in my point of view. I always choose a character because I think that building his or her costume will be an interesting technical challenge. I choose a cosplay for what it will allow me to learn as a costumer. It happened that I choose a character that I didn’t know just because I loved the costume! For example, my R Mika from Street Fighter. I never played the game and knew very little about the character, but I wanted to build that costume. So I made searches about the character’s background to make sure that my interpretation of the costume would please the ones who are big fans of the character and this costume remains to this day one of the most complicated I built. For me, the costume is definitely what makes me choose a character for cosplaying,” Marie-Claude Bourbonnais reiterated.

The character of Scorpion from Mortal Kombat is Marie-Claude Bourbonnais’s favourite costume to cosplay. It was challenging constructing the costume because she had to learn new complicated sewing techniques when working with leather.

“My favorite cosplay is Scorpion from Mortal Kombat, not only because this video game is iconic to me, but also because this leather costume is one of the most complicated I made. I learned specialized leather sewing techniques especially to make that costume. At the time, I was in the process of getting a diploma in leather clothing sewing and I submitted my Scorpion costume for the final examination. I got my diploma thanks to my Scorpion costume! This costume means a lot to me. It’s the result of 19 years of experience in pattern drafting and sewing,” Marie-Claude Bourbonnais replied.

Leather is a very challenging material to work with when making a costume, and so is latex.

“Working with leather is different from working with regular textiles. Cutting and sewing techniques are different, leather pieces require preparation before beinging to sew. Sewing allowances have to be glued inside the piece of clothing, so it’s another universe. I enjoy working with leather, it’s my favorite material to work with”.

“Working with latex is also challenging. I discovered that material through my work as a glamour model and I wanted to integrate it in my work as a costumer. Latex is also completely different from every other textile material. But it has a unique look that no fabric has. I’m happy I got the chance to learn how to work with latex, it’s one more skill I can use as a costumer,” Marie-Claude Bourbonnais added.

In addition to costume making, Marie-Claude Bourbonnais also has experience with prop making and set building.

“When I discovered cosplay, I was already very advanced as a seamstress, but I had no real knowledge about prop making. I wanted to be able to produce props that would have the same level of quality as my costumes, so I learned by myself. For many years, I’ve been collaborating with a tabletop game company called Soda Pop Miniatures – Ninja Division. They integrated me as a character in each of their games and each year, I attend Gen Con, the biggest tabletop convention in North America, with them. For Ninja Division, I built 2 big fiberglass statues, a fiberglass robot unveiled at Gen Con 2015 and a fiberglass spider unveiled at Anime Expo in 2016. Over the years, I built sets to take my own costumes in pictures. I remodeled my workshop along with a friend of mine. All these projects allowed me to learn a lot about different prop making and set building techniques,” Marie-Claude Bourbonnais explained.

Marie-Claude Bourbonnais knowledge of latex allowed her the opportunity to make costumes for a blockbuster movie. Although the costumes she made didn’t make the final cut of the movie, it was still an amazing experience for her.

I have friends who live in Atlanta and they were working on the set of Guardians of the Galaxy Vol. 2. The costume designer wanted latex costumes for some background characters and they couldn’t apparently find anybody available around at that time to do what she wanted, so I had the chance to go and make these costumes. The costume departments had made 3 different options of costumes for these characters, including the latex costumes I made, and when I left, the costume designer still hadn’t decided which costumes these characters would finally wear. When I watched the movie, I didn’t recognize any of the costume options I had seen while I was on set, they didn’t use my latex costumes either. It means they had more costumes done last minute or they used literally something else. It’s surprising to see that they built all these costumes just to have a choice and they didn’t use any of these at the end. No wonder why these superhero movies are so expensive to produce! I’m very happy I had the opportunity to see even a little part of a movie set and their costume department. Even though the costumes I made were not used, it’s an unforgettable experience,” Marie-Claude Bourbonnais disclosed..

Marie-Claude Bourbonnais enjoys attending comic conventions, and she is looking forward to returning to CAPE for a second time.

“Spending so much time in my workshop, it’s a privilege for me to have the opportunity to meet people at a convention and share with them what I’ve been working on for so long. As much as I enjoy the time spent in my workshop, I love talking with people, seeing the costumes they made, answering technical questions as much as I can. I love seeing teenagers and young adults who started sewing for a cosplay. If cosplay can make sewing trendy again, it makes the seamstress in me very happy! I’m looking forward to meeting people in Cornwall. I hope I’ll have a new costume ready on time for CAPE and I can’t wait to see your costumes,” Marie-Claude Bourbonnais concluded.