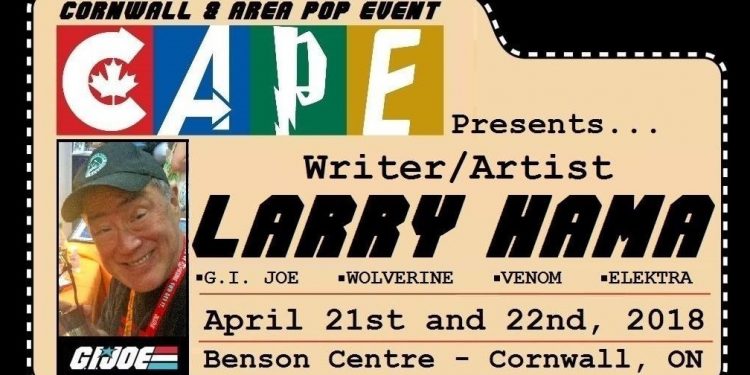 Cornwall Ontario – New York based comic book artist Larry Hama is going to be a guest at the Cornwall & Area Pop Event (CAPE) on April 21st and 22nd, 2018 at the Benson Centre in Cornwall.

Larry Hama’s recent script credits include “Batman Shadow of the Bat,” and “Wonder Woman” for DC Convergence, “GI Origins” and “GI Joe A Real American Hero” for IDW, as well as “Call of Duty Black Ops” for Dark Horse. Also, his cartoons and illustrations and cartoons have appeared in publications like Rolling Stone, National Lampoon, Esquire, New York, and others.

Ironically, Larry Hama’s big break in the comic industry was with Marvel’s GI Joe, a job no one else really wanted.

“Yes, everybody else turned it down. Licensed comics were bottom rung- only D-list talents worked on them because they paid the lowest rates (licensing fees were taken off the top of the page rate) and older pros told me that if I did a “toy book” I would never be offered an A list book for the rest of my career. They were actually correct in that regard. I took the job because it was the only way I could get a foot in the door as a writer. I had been drawing comics since the late ‘60s, and I was a full editor at Marvel, and I couldn’t get a single editor to give me any script work. My biggest accomplishment on GI Joe was making it to the next year. It always seemed on the verge of cancellation,” Larry Hama recalled.

However, the GI Joe action figures and cartoon show both became a culture phenomenon in the 1980’s, and the comics were a part of that sensation. This is well documented in the new Netflix series “The Toys that Made Us” in which Larry Hama was interviewed. In addition to writing the comics, Larry Hama also created many of the file cards that children cut out of the back packaging of the toys.

“I haven’t seen the documentary. I try to avoid watching myself on TV. It makes me uncomfortable. I did the file cards originally as notes to myself on the characters. I called them “dossiers” and they were sort of like military 201 files. I had no idea that kids would clip them out and save them,” Larry Hama explained.

GI Joe was also very popular with female audiences. The character of Scarlett is loosely based on the personality of Larry Hama’s wife.

“I got lots of letters from girls. If a comic came into a household of multiple kids, there was a good chance that all the kids would read them. Girls didn’t go out and buy GI Joe at first, but they read the issues that their brothers bought, and discovered that the female characters in Joe were just as competent as the males, were treated the same, did the same jobs. I’ve had women come to my table at cons and show me the postcards I sent them as replies to their letters. Scarlett is a slightly less snarky and sarcastic version of my wife, Carol- who I met at Marvel when she was the NYC rep of the Marvel animation studio that did the series,” Larry Hama reminisced.

In addition to GI Joe, Larry Hama also worked extensively on Marvel’s “Wolverine” in the 1990’s.

“My favorite issue of Wolverine is #75 “Fatal Attractions.” It hangs together well with good action and that pesky emotional stuff,” Larry Hama explains.

That comic book, written by Larry Hama, was one of the first to ever feature a hologram on the cover. Also, according to Marvel Wiki, it is the book that reveals Wolverine’s claws are a part of of his bone structure and not implants.

In the 1990’s, one of Larry Hama’s own creations – Bucky O’Hare – came to life. Bucky O’Hare became a popular cartoon show, an NES game, and of course a comic book too.

“Bucky O’Hare was sort of my tribute to Wallace Wood, and Carl Barks. I wanted to do funny animals in space. I had always been an Uncle Scrooge fan, and I thought a combination of that whimsical Barks storytelling and Wally Wood space hardware crossed with the Hasegawa Egg Plane aesthetic would be peachy keen,” Larry Hama said.

Many comic book series including Dead Pool and Guardians of the Galaxy have their own movies now.  Will there ever be a live action Bucky O’Hare movie?

“It would be nice to see it made into a combined live-action and animation feature (the original concept) before I shuffle off this mortal coil,” Larry Hama disclosed.

Before becoming a full time artist, Larry Hama was also an actor. His resume includes an appearance on the television show M*A*S*H in the episode “The Korean Surgeon”, and on Saturday Night Live (SNL) for a spoof of Apocalypse Now.

“They were both a lot of fun, even if the costumes were uncomfortable. On M*A*S*H, I had to lug a Thompson gun around with me for the whole day, and my long hair was tied in a pony-tail and stuffed down the back of my fatigues. On SNL, I was wearing a loin-cloth and was painted white from head to foot. I had to stay in costume and make-up all day because there was a rehearsal in the afternoon, and then the show was live at 11:30 PM. The casts of both shows were really wonderful and kind. On SNL, Al Franken went out of his way to make me more comfortable,” Larry Hama added.

More recently, Larry Hama appeared as himself on Seth Green’s television show Robot Chicken. The Family Guy creator contacted him to be on his stop motion animation series.

“Seth called me and said he was in town, and asked me if I would do the show, and he came over to my loft and shot my sequence on an iPhone. It was very casual and pleasant,” Larry Hama recalled.

Local fans have a chance to meet Larry Hama next month at CAPE.

“I enjoy talking to fans, and I like sketching for them. I have arthritis, so signing large quantities of stuff is not anything I do anymore- it physically hurts. I draw by locking the pencil in my hand and moving my whole arm. I guess I could learn to “draw” my signature, but I would have to unlearn some ingrained muscle memory,” Larry Hama disclosed.

Larry Hama is looking forward to attending CAPE and trying out the local Cornwall cuisine.

“I always try to sample the local cuisine wherever I am, and I’m fairly adventurous. I’d rather eat at the local greasy spoon than at Applebees or PF Changs any day- I mean, PF Changs- really? Where I live in NYC is walking distance from Chinatown,” Larry Hama concluded.

For more information on CAPE including entertainment, exhibitors, and tickets, visit their website.

And the winners are!