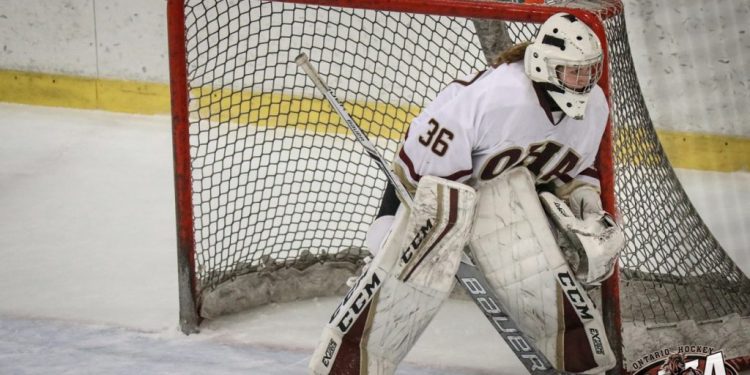 Cornwall Ontario – From the time Stephanie Martin was a little girl, growing up in Yorktown Virginia, she knew she was born to be a goalie. Stephanie is a post-grad attending the Ontario Hockey Academy here in Cornwall Ontario, as a third year student athlete. With lots of dedication and hard work, Stephanie has built a successful career for herself.

“Playing hockey outdoors with my older brothers, they always used to throw me in the net. I didn’t really mind it much, I then begged my parents to let me join a team. Growing up, playing with boys, I decided I wanted to take my game to a higher level and pursue my dream of playing collegiate hockey. That is how I ended up here at OHA”, Stephanie Martin explains.

Here at OHA, Stephanie Martin did just that. She has played Intermediate AA hockey for both the OHA Juniors and Tardiff team. Coaches and staff around the school often refer to Stephanie as a role-model for younger students. Stephanie has a positive attitude and great work ethic academically, on the ice and in the gym.

What are some challenges you have faced?

“I would have to say my knee injury has been my biggest obstacle so far. Last season, I tore my MCL, which put me out for four months. It was hard for me to stop playing and training all together. Watching my team win tournaments and championships, while having to watch from the stands was very difficult”, Stephanie recalls.

Nevertheless, Stephanie Martin recovered from her injury. Stephanie has learned to be resilient and came back mentally stronger which is something she has learned playing the game.

“Being a goalie, the mental aspect of the game is important. I have taught myself with experience and patience not to get into my own head”, Stephanie said.

Attending the Ontario Hockey Academy, Stephanie Martin has not only improved as a goaltender but she has also learned life skills she said are valued everyday in the real world.

“The past three years here, I have learned to adapt to new things. Transitioning from the fire to living at The Nav Centre for a year wasn’t easy. Making friends who become family is something I am beyond thankful for. OHA has allowed me to grow as an athlete and as a person”, Stephanie tells us.

Is there anyone in particular you look up too?

“I would have to say my parents for the most part. My parents are hardworking and have given me the privilege to attend OHA. They put faith in me and are very supportive of my college hockey dream”, Stephanie explains.

Steph Martin has been very successful throughout her hockey career. For example, winning the Virginia State Championship.

“Winning Virginia State Champions with my boys team back home is definitely one of my fondest memories. The final game went into a shootout, being the only girl on the team, proving the boys wrong and winning the title “best team in the state” is a huge accomplishment for me as a goalie, Stephanie reminisced.

As Stephanie’s time here at the Ontario Hockey Academy is coming to end, she can say she ended her last season on a high note. OHA’s Tardiff team, finished first overall in their league. Stephanie won the semi-final game, holding a 2-1 lead sending her team off to the finals. In the final game OHA’s team Tardiff beats OHA juniors with a 3-2 final score in overtime claiming themselves as EWHC champions.

“Everyday was a push for me. Despite my knee injury, I have worked hard everyday to finally have reached my goal. I am very excited to play for Elmira College and represent the Ontario Hockey Academy”, Stephanie Martin concluded.

To learn more about the Ontario Hockey Academy visit their website.