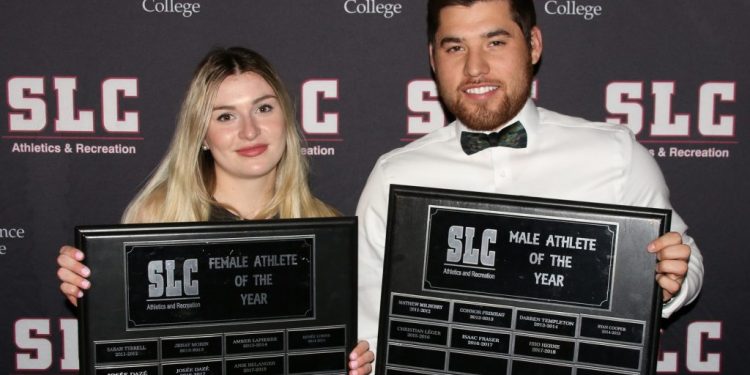 Cornwall, Ontario – St. Lawrence College Athletics recognized the achievements of the SLC – Cornwall Sharks athletes, coaches, and staff on April 4th at the Annual Sharks Athletics Banquet in Cornwall. Every year, SLC honours the hard work, commitment, and passion of its student athletes, both on the court and in the classroom, at the annual event.

During the 2017-2018 season, the Sharks had a number of standout athletes who were members of more than one team, including the two who have been named Male and Female Athletes of the Year. Anik Belanger (Cross-country and Women’s Indoor Soccer) and Hiio Herne (Golf and Men’s Hockey) took home the top honours this year. Anik Belanger built on last year’s strong rookies season to become a key member of both the cross-country and the women’s indoor soccer teams. She has become a player that her coaches can rely on to give maximum effort in every single game and race, even when facing some of the toughest competition in the OCAA. She leads by example and can often be seen encouraging her teammates. She has not only been successful in athletics, but also in the classroom where she has maintained an impressive GPA in the difficult Bachelor of Science in Nursing Program.

Hiio Herne was a standout performer in both of the two sports that he competed in during the 2017-18 season. His ward work, dedication, and willingness to compete earned him two Most Valuable Player awards this season, and he was a leader for both the golf and the men’s hockey team. He was instrumental on the ice, scoring or setting up a number of crucial goals for the Sharks. On the golf team, Hiio consistently finished as the top Sharks golfer, including a third-place finish at the Georgian Invitational. Hiio has shone not only due to his athletic ability, but also for his humble character, confidence, and positivity.

The Academic Athlete of the Year award recognizes a male and a female athlete who each have been incredibly successful both in their sport as well as in their studies. This year, Caroline Plourde (Women’s Indoor Soccer) and Colton Gallant (Men’s Indoor Soccer) were rewarded for their dedication to their academics and their teams.

Colton has been highly praised by both his coaches and his teachers all season and made considerable contributions to the men’s indoor soccer team while maintaining an excellent GPA. Caroline has always been first to share her knowledge and love of the sport of soccer. She was a reliable leader and hard worker, which translated to significant playing time. She was able to do all that while remaining in high academic standard in a rigorous course load.

Two Stars and a Wish