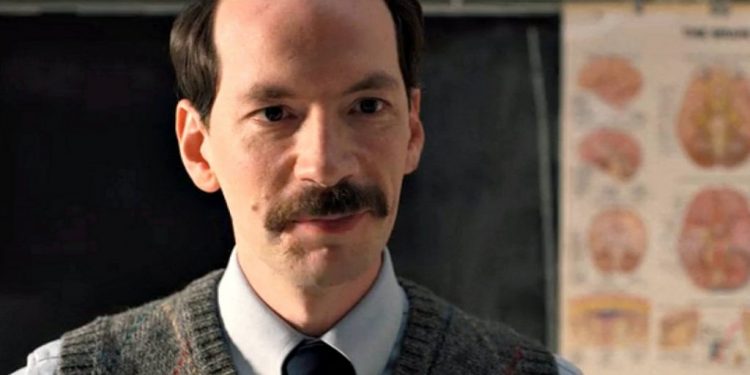 Cornwall, Ontario – The Upside Down is coming to Cornwall when Stranger Things actor Randy Havens is a celebrity guest at CAPE (Cornwall and Area Pop Event) on April 21st and 22nd, 2018 at the Benson Centre. If you see any demongorgons at CAPE, don’t worry, it’s probably people cosplaying.

Randy Havens resumed his role as science teacher Mr. Clarke for Season 2 of the Emmy Award winning series Stranger Things. He’s appeared in a total of ten episodes, including the first episode of Season 2 that garnered over 16 million U.S. viewers on Netflix according to Nielsen data.

Stranger Things was created by the The Duffer Brothers, who Randy Havens describes as being brilliant.

“They’re brilliant. They have such a deep and intricate knowledge of film and they’re such great communicators and collaborators. I feel so lucky to work with them. I love being a part of the show. It’s so special nowadays to be in a show that hits like this one did. People have a lot of choices when it comes to what they watch on TV so I’m glad they watched our little show,” Randy Havens said.

The setting of the show takes place in the 1980’s in Hawkins, Indiana. The show successfully creates a 1980’s pop culture feel from the use of cars, to the furniture, also the technology, and references to Star Wars and Ghostbusters. Randy Haven’s favourite part of that time period was the music.

“The music is clearly the best part of the 80s” Randy Havens stated.

In addition to a rich setting, the show features an amazing cast of characters including Winona Ryder as Joyce and David Harbour as Chief Hopper; however, the show is best known for it’s younger talent. For example, Millie Bobby Brown stars as Eleven, Gaten Matarazzo stars as Dustin, Finn Wolfhard stars as Mike, Caleb McLaughlin stars as Lucas, Noah Schnapp stars as Will, and Sadie Sink has joined the cast in Season 2 as (Mad) Max. Randy Havens has worked along side many of the younger cast members on the show, and he thinks very highly of them.

“They’re very talented and very funny and also very professional. They don’t really act like kids. There was a day when I was walking to set and they were on the playground and it clicked for me that they were actually children and I was like “Oh yeah, they’re totally kids.” There are so many good times on set, it’s hard to pick one; however, filming our scenes from “The Flea and The Acrobat” was definitely one of my favorites,” Randy Havens noted.

Mr. Clarke, as a science teacher and head of the A.V. Club, inspires his students at Hawkins Middle School, and he’s always there to answer their questions. For example, in the episode “The Flea and The Acrobat”, after Will’s funeral, Mr. Clarke answers the boys questions about the possibility of traveling to other dimensions (like The Upside Down). He always keeps the curiosity door open for his students – even if the character of Eleven (spoiler alert) needs to close that gate.

Randy Havens can relate to his character, because he had a few Mr. Clarke type teachers that really inspired him when he was at school.

“Yes, I did. I had a few actually. They were the teachers that inspired me to look beyond the textbook and to delve deeper into the subjects we were studying. The teachers that taught me to think for myself and the ones who showed me that it wasn’t all about multiple choice answers on tests,” Randy Havens recalled.

Netflix also aired “Beyond Stranger Things”, which included in-depth discussions about the show by cast members, creators, and guests. Randy Havens appeared on an episode with Bill Nye “The Science Guy” to talk about the science of the show.

“He was great! Well, I mean I didn’t learn it then but it was definitely reinforced: I am not a smart man,” Randy Havens claimed.

Fans can expect to see Mr. Clarke again in Season 3. Are there any hits as to what Mr. Clarke will be up to next?

“Who knows what season three will bring for Mr. Clarke? Hopefully he’ll get involved in the adventures,” Randy Havens replied.

In addition to Stranger Things, Randy Havens also had a role on AMC’s Halt and Catch Fire playing the role of Stan-an. He had the opportunity there to work along side Scoot McNairy.

“I auditioned for it with a few different people, eventually auditioning with the two other actors that would fill out the trio. Honestly, getting to work with Scoot McNairy. That guy is the most amazing actor I’ve ever gotten to work with. Every day on set was a master class,” Randy Havens disclosed.

Also, Randy Havens was a voice actor playing the role of Mr. Rompers on the cartoon show Archer. It was a great experience, but voice acting is not his passion.

“It was very short, I think each episode took about fifteen minutes. I mean for the time I spent on it, I was very well paid, but my passion is not really there. It’s very impersonal to stand in a booth and deliver lines. The real art comes from the animators and editors. Actors are kind of utilitarian on an animated show like that,” Randy Havens reflected.

Next, Randy Havens has a role on the upcoming 2019 release of Warner Bros. Pictures’ and Legendary Pictures’ Godzilla: King of the Monsters. However, he can’t disclose anything about the movie.

“I can tell you nothing, under penalty of death! I watched all the GODZILLA films as a kid, so it was a real treat to get to meet the real Godzilla. Nice guy, actually. Very generous and personable,” Randy Havens joked with a smile.

Growing up, Randy Havens didn’t watch a lot of the classic monster movies, but he was a fan of Friday the 13th and Nightmare on Elm Street.

Randy Havens is looking forward to meeting fans at CAPE in Cornwall and chatting about Stranger Things.

“I love meeting the fans! It’s so cool to get to talk to people that love Stranger Things. I can’t wait to meet you guys! We’re gonna have a blast,” Randy Havens concluded.