Interview with Strung Out opening for Pennywise in Ottawa 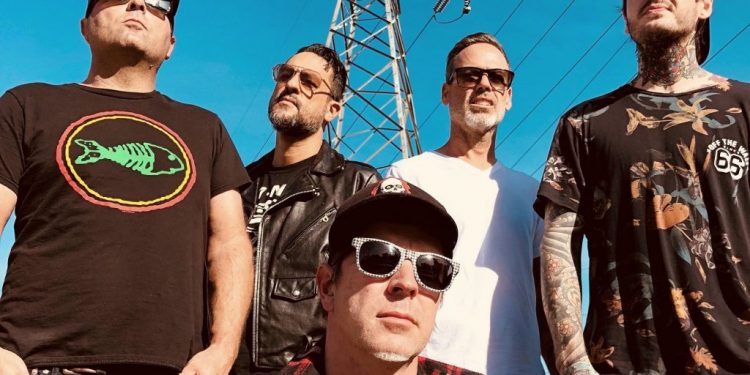 Ottawa, Ontario – Punk legends Strung Out will be joining punk icons Pennywise on their “Never Gonna Die” tour. This includes a stop in Ottawa on Friday, May 25th at the Bronson Centre Theatre.

The lead singer of Strung Out, Jason Cruz, is looking forward to the opportunity to play Ottawa again.

“I was really sick last time we played Ottawa and I lost my voice. I owe Ottawa a good show so a good show Ottawa shall get,” Jason Cruz stated.

Fans of Strung Out can look forward to hearing some of their favorite tunes live in concert.

“We’ll be playing some favorites we haven’t played in a while and some new material. Mostly there will be what seems like 5 dogs looking to kill something making a big beautiful noise that will make you wanna slap your mamma,” Jason Cruz added with a smile.

Strung Out have a new album coming out on May 11th called ‘Black Out The Sky’. The album, which is being released on Fat Wreck Chords, was produced by Kyle Black, who also produced their last album in 2015.

“Black out the Sky is a semi acoustic EP we have been working on for the last two years. After making our last full length Transmission Alpha Delta, we figured it would be a smart move to try something different to set up the next full length album. I think so many records these days all sound the same sonically, especially when you follow-up a big sounding full length with another right away you risk compromising the albums initial impact and urgency. We figured create a little tension with this EP then release a mother f-cker to knock people on their asses,” Jason Cruz said.

“Conceptually this new EP represents balance, spiritual vacuum, new beginnings and the acknowledgment of sum form of inner light that has been obscured by either dogmatic religious interpretation and an over reliance on modern illumination and ‘intellect’. We kind of lost our way in the fake light kinda thing,” Jason Cruz explained.

According to Jason Cruz, the song writing process for Strung Out often means a lack of sleep.

For Jason Cruz, his favorite work with Strung Out is always the new work, the latest music the band produces and releases to the public.

“It’s hard to contend with what certain albums mean to certain people because they represent a time in people’s lives. My favorites are always the new work. If it makes it out the door than its passed quality control and I have validated my own self-worth and done good work that will hopefully resonate,” Jason Cruz reflected.

Strung Out have been a band since 1989. Jason Cruz has been playing along side Jake Kiley and Rob Ramous since the beginning. They were just 17 years old when they started playing together, and the bond between them runs deep.

“The bond between us is marrow deep. It’s an extraordinary accomplishment to not only have maintained this relationship for so long but to have it blossom and develop in so many ways personally and professionally. To me you get the most out of life by nurturing and maintaining relationships as well as having the insight and strength to know when change needs to happen and doing what it takes to re-calibrate the machine and continue forward,” Jason Cruz disclosed.

The band also features Chris Aiken, and their new drummer is RJ Shankle.

“RJ is one of the most sincere, dedicated, hardest working men I have met and he fits right in. To me he is a gift when we needed an inspired honest soul the most. I am just thankful and look forward to whatever the future may bring,” Jason Cruz disclosed.

Strung Out were one of the first bands to ever sign to Fat Wreck Chords.

“It feels like a long marriage. What can I say? I am a musician that has never been given any reason to bitch about our label. Through all the albums, the peaks and the valleys of this crazy ‘business’ we are still doing great things together,” Jason Cruz said.

Next year marks the 30th anniversary of Strung Out and Jason Cruz thinks the band is just starting to reach the pinnacle of their music career now.

“Yeah, it’s a trip. I have spent most of my life here in this band. I kind of feel we are just beginning to write great material. We all write and we all work really hard. A new full length is in the works, and the rest will fall into place naturally,” Jason Cruz replied.

Last year Strung Out played Warped Tour, a tour they have played numerous times before, but now the iconic festival is coming to an end.

“Warped Tour has been good to us and it made an incredible impact on a generation or two. Job well done,” Jason Cruz proclaimed.

Although Warped Tour is coming to an end, new festivities are on the horizon. This summer Strung Out will play Camp Punk in Drublic organized by Fat Mike of Nofx. The festival includes Strung Out, Pennywise, Rancid, the Mighty Mighty Bosstones, Me First and the Gimme Gimmes, Jello Biafra, and more.

In addition to playing this brand new festival, fans of Jason Cruz’s other band Jason Cruz and Howl can also look forward to new music on the horizon.

“There will definitely be new material from The Howl project. America needs us now more than ever! I take my time writing because I can and it’s better that way sometimes,” Jason Cruz concluded.

See Strung Out and Pennywise live in Ottawa on Friday, May 25th at the Bronson Centre Theatre. The event is all ages and licensed 19+. Doors are at 7pm. Tickets range from $37.50-42.50 in advance plus service charges. Tickets are available now at Vertigo Records, both Compact Music Inc. locations and online.