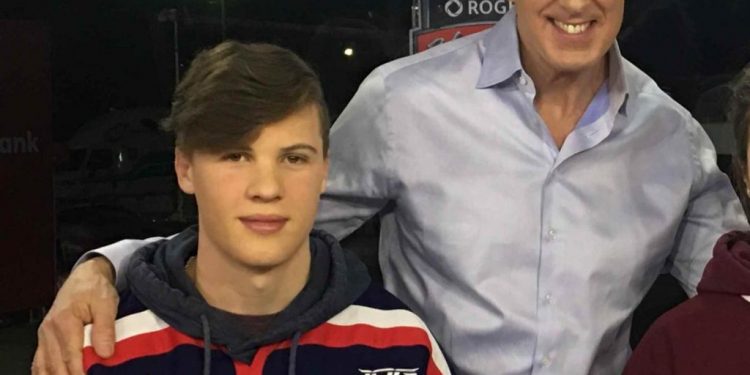 Cornwall, Ontario – Top prospect Josh Barnes (pictured on the left) has committed to Pennsylvania State University for the 2020-21 season.

That means Barnes will play with his hometown Cornwall Colts beginning in the 2018-19 CCHL season.

Barnes will only turn 16 in late September but suited up for the Colts last season and in 7 games had 3 goals and 2 assists for 5 points during the regular season. He followed that up with 6 points in 7 games during the Colts first-round playoff loss to Hawkesbury.

Barnes was a 2nd round selection (24th overall) in the 2018 Ontario Hockey League Draft in April.

The Penn State Nittany Lions (formerly the Icers) play in the NCAA Big Ten and have been running their current program since 1971. Head Coach Guy Gadowsky is into his 6th season behind the bench.

A few months ago Josh Barnes and Gabrielle Davidson Adams appeared on Hometown Hockey for the broadcast of an NHL game on Sportsnet alongside Ron Maclean and Tara Slone.