Here are the Cornwall Sports Hall of Fame 2018 Inductees 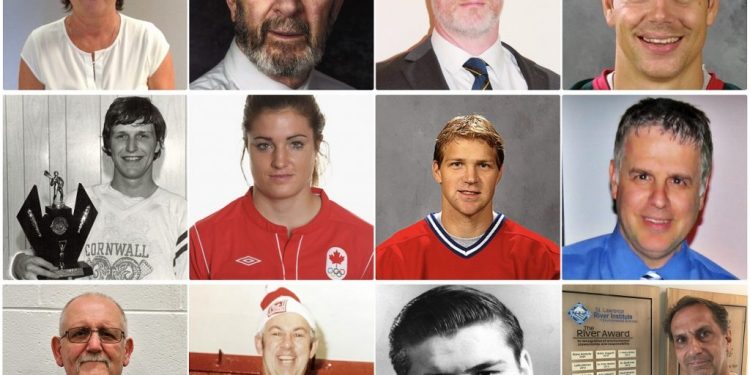 Cornwall, Ontario – The Cornwall Sports Hall of Fame Induction Dinner is taking place on Saturday, August 11th at 7 pm at the Civic Complex. Doors for the event open at 6 pm. 12 local sports athletes and/or builders from 7 different sports will be inducted. Tickets are available at Gordon Jewellers (14 2nd St West) during regular business hours and are $60 each.

Here is The Cornwall Sports Hall of Fame Class of 2018:

Helen Doll-Greer – Golf – For parts of four decades Helen has been the club champion at Summerheights including a run of 13 wins in 14 years. In 2016, she won the senior ladies club title. Also, in 1990 Helen made the Quebec Amateur Team and qualified for the Quebec provincial tournament. Helen has won nearly everything there is to win in a career that includes two aces.

Michael Dorey  – Football – Born and raised in Cornwall, Michael was the backbone of the St. Lawrence Saints from 1962 to 1965. He was a fearless runner who led the Saints to three straight EOSSA championship games and winning twice. Michael was recruited by St. Francis Xavier in 1966 playing two seasons there. He transferred to Loyola and played out his collegiate career in 1970.

Aaron Gavey – Hockey – He is a CMHA alumnus for five years. Aaron was drafted by the OHL Sault Ste. Marie Greyhounds 1991. He was selected 74th overall in the 1992 NHL draft by the Tampa Bay Lightning. He played on six NHL teams registering 91 points. He retired from hockey in 2007 and is a member of the Sault Ste. Marie Sports Hall of Fame.

Alex Herrington – Lacrosse – He is a multi-sport athlete excelled as a Broomball and Lacrosse player. From 1963 – 1974 Alex starred on the Cornwall Minor Lacrosse association teams winning Eastern Ontario Junior C championship. In 1976 he captained Maquette Glass Rams to a silver medal at the Ontario Summer Games in London. Also, he was the Lions Sportsman of the year in 1977. He currently holds three OLA records for most points in a game, goals, and assists in one game. In 1980 he turned to Broomball and was part of the National Champions in 1980 and 1982.

Christina Julien – Soccer – She is a Cornwall Minor Soccer alumnus who began her soccer career with Ottawa Fury. She played with the Fury from 2007 through 2011. She was a member of the Canadian Women’s National Soccer Team in 2011. She is a Pan Am Games gold medalist, and also a member of the FIFA World Cup team in 2012. She turned professional in 2012 through 2015 with teams in Sweden, Russia, Germany, and Australia. She is the Jacques Richard Memorial Trophy winner in 2011.

Chad Kilger – Hockey – He is a CMHA Alumnus who was acquired by the OHL Kingston Frontenacs in 1993. He was a first round, fourth overall selection of the Mighty Ducks of Anaheim 1995. He played for seven NHL teams scoring 107 goals. To date, he has played in the most NHL games (712) by a Cornwall native. Chad won the Jacques Richard Memorial Trophy in 2003.

Giles Lascelle – Builder Girls Hockey– Giles Lascelle is a lifelong hockey player, coach, and pioneer for Girls Hockey in Cornwall. He continues to build the game through the popular world renown Ontario Hockey Academy. While his accomplishments are many, Giles initiated a fair ice policy with the city for Girls Hockey. He is a past President of Girls Minor Hockey and tournament coordinator.

Roy Ledoux – Builder Lacrosse– Roy Ledoux has a 45 plus year love affair with Lacrosse at all levels. He began playing in the Cornwall Minor Lacrosse Association in 1965 and played competitively into the 70’s. He began coaching in 1978 and his juvenile team won Bronze at the Ontario championships. The game of Lacrosse folded in this once hotbed area and in 2000 Roy brought the game back. By 2006, Cornwall had a junior lacrosse program when the Celtics returned to the floor. As General Manager of the Akwesasne Indians junior B team, the Indians won the Founders Cup National Championship. Roy was inducted into the Ontario Lacrosse Hall of Fame in 2017.

Bob Racine – Builder Broomball– Building from an established base, Bob Racine organized the town league known as the JOC. He became treasurer of the Eastern Ontario Broomball Association during the 70’s and in 1979 amalgamated his JOC league with Seaway Valley Broomball League to form Cornwall regional League. Bob orchestrated the formation of outstanding players from the area to play in national competitions and his teams won two bronze and two gold medals.

Terry Riley – Lacrosse– One of our fiercest and highly competitive lacrosse stars of the 1960’s Terry scored at will. Beginning with the Drummondville Athletics, where he led his team for two seasons, he came to the Miller Hughes Mustangs of the Seaway Junior Lacrosse League. In 1967 Terry played for the Cornwall T-Birds a team that lost in the final of the Canadian Lacrosse Junior Championship.

David Merpaw – Endurance Sports – A long-time endurance athlete and river steward, Dave Merpaw began his career in 1994 by taking on the Ultra Ironman Endurance Event. He participated in World Championship events as the only Canadian representative in nine countries across the world. He re-invented himself as a long distance river swimmer and has swum to raise awareness for the state of the world’s rivers. He was also the Jacques Richard Memorial trophy winner in 1996.

Big Changes at The Seeker - Secret Reveal on August 1st