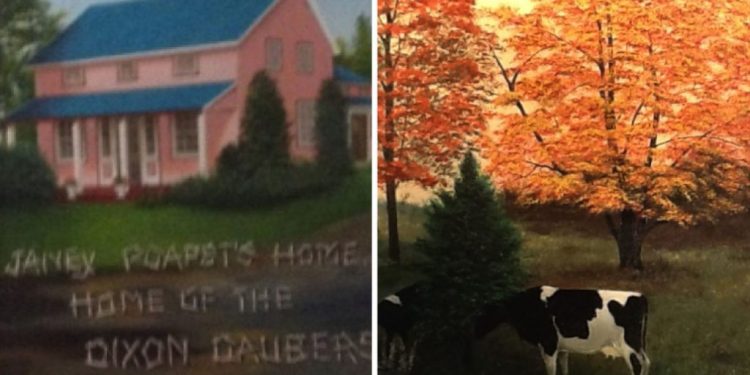 “A colourful story” by Lisa Gray

Janey’s painting of ‘The Years In Between’ was how she described her life as being that little space between the adult Holstein and the calf. My sister Debbie, who was her student would say “That’s you and me Janey and it’s not so far at all”. That painting now hangs proudly at the entrance to my sister’s home.

Janey Yeager was born in 1908 along the Kootenay River, in a town named after the paddle-boat/sternwheeler “Moyie” in beautiful British Columbia.

Her father ran a logging/sawmill business that took him away from home leaving her mother in control of everything-right down to the bath water, which on Saturday nights was the cleanest and hottest for young Janey who worked hard staying clean all week for this treat.

As a young girl, Janey spent her time caring for her younger siblings helping her mother run the household. Her parents taught through their example-working tirelessly to keep the family afloat, enduring all manner of grievous choices using every scrap of cloth and ticking to scrape out an existence.

The odd Saturday afternoon saw Janey take to the edges of the docks and watch the Moyie as she unloaded. After years of moving freight, the steam-boat started taking passengers for day trips along the Kootenay and it was here that Janey became interested in art and saved her pennies to purchase art supplies from the mail order catalogues. She did so well that she was hired for a time to draw pictures of dresses for the Eaton’s catalogue.

She fell in love with the picturesque skyline and the way the water seemed to roll along the boats underbelly and like a camera her mind’s eye snapped up those shots and stored them away for another time.

When Janey turned sixteen she met her future husband Charles Poapst who was working for her father.

The twenty-seven years between them didn’t matter for they shared the same values and ideals about life. Janey knew from the moment she said ‘yes’ that the journey of her life was about to turn completely around because Charles’ family originated in Northfield Station, ON.

So it went that they worked their way across the Provinces earning enough money to carry them over to the next town-the next farm. By the time they got half way across the country in 1928, their first son Charles Jr. was almost a year old.

Charles continued working at large grain mills and was a volunteer fireman, where oftentimes the crews settled in at their kitchen table where Janey’s home cooked meals, brought all manner of noisy chatter. She never forgot this exciting time of her life and spoke of it many times over the years.

Two years later the young family was on the move again. If driving the longest-flattest highway straight through the Prairies weren’t the worst thing in the world-perhaps it was driving through a snowstorm on a country road in the middle of the night, stepping straight into the Great Depression.

Regardless of what was to come, Janey managed to incorporate her love of art with old sketchbooks and charcoal pencils she’d dragged across the country-making time for them any way she could.

Janey’s desire to have her world decorated was never expressed so vividly as when it came time to paint the house. Regardless of Charles’ objections it was painted bright pink with a blue roof. Carrying her ideals further into the house with flowery wallpaper and different colored rooms, hosting all manner of cacti on the windowsills.

Janey’s love of flowers began the couple’s modest approach to making a living-selling these and assorted vegetables at the farmers market in Cornwall. She planted all kinds of flowers in the beds surrounding the house so that people could envision their own gardens looking as beautiful.

In those days there were no garden centers, so it was no surprise that hundreds of people made the 20 mile trek from Cornwall. To think of the countless tomato and flower plants that were grown from seed, in that little greenhouse seems incredible today, but many of those folks became like family to Janey and Charles on the Dixon Road.

At the farmers market, Janey decorated wooden tables with light green oilcloth and placed the hand washed vegetables. Amongst the groupings of produce, she’d bunched together various flowers in small containers that she’d worked into the night to sort. It was a very rare thing indeed to not sell them all-she was that talented.

After the busy summer months of selling her harvest, Janey almost couldn’t contain herself when having young Charles and his family over for Sunday dinner for big buffets. She would proclaim that “This was the best time of the day, when everyone was together enjoying a good meal”.

In 1949 when Janey was 40 years old she gave birth to her second son naming him Gailand. Her husband was more than pleased to see the glimmer and youthfulness in Janey’s eyes because of the hard, working years that came before. Having the second child at their age was actually a new beginning for many people and brought great changes on the Dixon Road.

When Gailand was a boy, Janey would make storybooks out of the cereal boxes-cutting and gluing pictures from magazines into them.

In the cold winters the paint by numbers came out of closets and it became a family affair with everyone at the table painting into the afternoon.

After a few years the collection filled closets and she’d find another uses for the leftover paint pots, creating other paintings.

Her first effort was the little pink house with blue roof, green lawns and fish ponds out back.

Because the paints cost so much, Janey started making braided rugs in her spare time with help from her husband and for some years the house became a rug factory with friends and neighbours helping out with unwanted clothing. Everything was washed, cut into strips and separated by material type and colours.

By the time Janey was a Grandmother, work on the farm was winding down and Charles was retired. Even so they remained spendthrifts, refusing for many years to have a telephone in the house, relying on neighbours and unexpected guests to get the local news.

After her husband died Janey experienced a new type of freedom and with encouragement from some of the neighbours, decided to take the arts and crafts program with her friend Leda Raymond, at the Encore Seniors at St. Lawrence College.

It was during a ceramics course that Janey had the inkling of what her next years would become. To watch a simple bowl take shape and come to life under her paintbrush was startling. Soon Janey was able to develop her innate talents that had begun when she was a teenager on the Prairies.

It was during one long winter that Janey and Leda had the idea to start the Dixon Daubers. It began with a few people coming over and soon it was every day of the week-from January through the end of March. The tables would be covered in thick clear plastic with easels set up across the kitchen.

She was extremely happy when the house was filled with people having a good time socializing, snacking and developing their talents.

The relationships Janey developed in those years is to be envied.

At the end of March there was a show and tell and it was like a revolving door-of men, women, children and teenagers, most meeting for the first time-everyone finally seeing what you’d painted.

Janey was known for her generosity and freedom of expression-refusing to be called the teacher, saying “I learned from you girls”.

She was once asked to paint the Rapids Prince steamship, which ran the rapids down the St. Lawrence. After her death the painting was donated to the Lost Villages Museum in her memory.

Once in a while people would ask Janey to paint people or their pets for her likenesses were striking. Believing that her work was never good enough Janey would either refuse to be paid or would barely charge enough to replenish her supplies-much to Gailand’s chagrin.

She was so happy when the Grandchildren would visit and take an interest in her work. In fact she’d get right down on all fours crawling around the kitchen as Janey didn’t believe in a hierarchy. Everybody got the same and yet she still agreed to be interviewed once-for her Grandson’s school project on Canadian icons.

It was here that Janey described how she felt ahead of her time and blessed to be born early enough to watch the coming evolution with the horse-the train-the car-the plane. Reading National Geographic was as close to travel as Janey ever got when she was newly married, but if you really knew her you’d think she’d traveled the world.

Even as she aged and the Daubers closed shop for good, Janey’s kitchen remained a gathering place for friends and neighbours for weekly card games, hearty dinners and good times. She was able to get around to local events because of the countless volunteers ready to tote her around the counties, like a shiny new penny.

I would love to have feedback from my stories…Please email me at: verlegrace4062@gmail.com