by nathan
in News and Announcements
Reading Time: 2 mins read
47 2 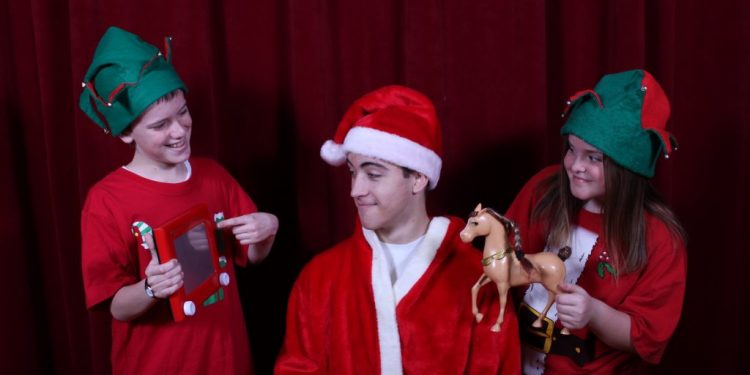 The Seaway Valley Theatre Company invites you to their annual children’s production. This year the
company will stage “Elf The Musical JR.,” based on the New Line Cinema film.

Buddy, a young orphan, mistakenly crawls into Santa’s bag of gifts and is transported to the North Pole.

The would-be elf is raised, unaware that he is actually a human, until his enormous size and poor toy-
making abilities cause him to face the truth. With Santa’s permission, Buddy embarks on a journey to New York City to find his birth father and discover his true identity. Faced with the harsh reality that his father is on the naughty list and that his half-brother doesn’t even believe in Santa, Buddy is determined to win over his new family and help New York remember the true meaning of Christmas. Based on the ever popular holiday film, this fish-out-of-water comedy is sure to charm and entertain your whole family.

Sophomore director Corey Disotell has put together a cast that features over forty young performers aged 6 to 18, made up of both enthusiastic newcomers and familiar SVTC faces. The show is produced by
Jennifer Bellemore and Katie Blackadder, dance sequences are created by longtime SVTC choreographer
Amy Malyon, and Stephanie St. Louis serves as musical director.

“Elf The Musical JR.” will be staged at the Aultsville Theatre, 2 St. Lawrence Drive, Cornwall, on
Saturday, December 8 at 1:30 pm and 4:30 pm, and on Sunday, December 9 at 1:30 pm. Tickets are $15.00 for adults and $12.00 for children 12 and under. (Admission includes the $1.00 Aultsville Capital
Refurbishment fee.) They can be bought in advance from the SVTC’s online ticket outlet, svtc.theticketwicket.ca. They are also available in person or by phone at the SD&G United
Way/Centraide office, 240 Water Street West, Suite 240, Cornwall. Office hours are 8:30 am to 4:30 pm,
and their phone number is 613-932-2051. They can also be bought at the door for one hour before each
performance. All seats are assigned and the theatre is wheelchair accessible.