Eric Bergeron is Upstarting Cornwall… And we love it!

by Editorial Board
in News and Announcements
Reading Time: 2 mins read
65 1 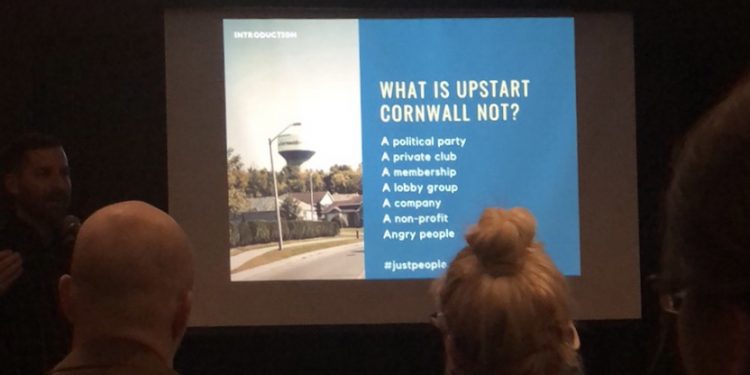 Newly elected city councilor Eric Bergeron has ideas.  Big. Bold. Ideas.  And he knows you have some too.

Tonight, we attended the formal launch of “Upstart Cornwall” in the back room at Schnitzel’s, where Bergeron pitched HIS big bold idea in front of a decent crowd of passionate people.

What are they passionate about?  Cornwall!

What is Upstart Cornwall?  Well, the picture below will tell you what it is not.

Bergeron, an entrepreneur, husband and father, is quick to say that whatever this new group is, it is not about him.  In fact, he practically promised that tonight would be the last time we would see his picture next to those words.  Many have become familiar with the colours, picture and slogan that Bergeron had been using on the campaign trail.   “From now on, YOU, are Upstart Cornwall,” he said.

But what is it?

I would define it as a group of people who want to see this community grow.  People who see the full undeveloped potential this city has to offer.  People who are willing to sit down, discuss and grow viable ideas to bring them to fruition.  It is a force mobilizing motivators, movers and shakers, in an effort to harvest the power of communication and action in order to advance Cornwall.  And judging from tonight’s level of enthusiasm and participation–seven or eight audience members actually stood up and took the mic to pitch their own idea–it will become a huge movement in the years to come.

Best of all, anybody can be part of it.  All you need is an idea. Big or small, crazy or attainable, any idea will do.

If you would like to know more and get involved, visit http://upstartcornwall.ca