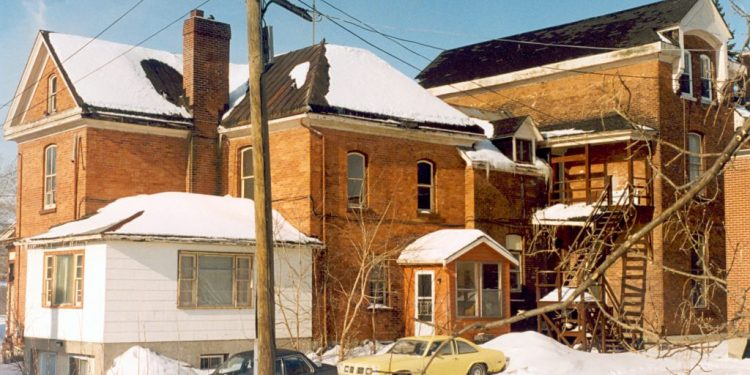 The southeast corner of York Street and Second Street West is a large vacant lot with York Street access to a small parking lot behind a Second Street law office. Years ago, two connected houses at 136 Second St W and 123 York Street graced that corner. The older, Second Street house, built in 1826, was first occupied by the family of James Pringle, a half-pay British officer. The connected York Street structure is believed to have been erected post-1882. Various wood additions popped up over time and were pulling away from the other buildings.

His son, Jacob Farrand Pringle (1816-1901), was well-known in this district. Jacob married Isabella, third daughter of Colonel the Honourable Alexander Fraser, by whom he had ten children. He is also the author of Cornwall’s first history book Lunenburg or the Old Eastern District, published in 1890.

Jacob was called to the Bar and admitted as an Attorney in 1838, practising until 1866. He was also Cornwall’s fifth Mayor in 1855 and 1856 and an early Lieutenant in our Volunteer fire brigade.

Pringle served as Commander of the Cornwall Independent Artillery Company and he raised the 3rd Cornwall Volunteer Rifle Company as Captain in 1862.

Among his community service work, he filled the role of Vice Grand of the St. Francis Lodge, no. 18, of the Odd Fellows and was Patron of the Curling Club in 1887.

Back to the house that was known variously as the house of Pringle, Macdonald, Ross, Whittaker and most recently owned by Walter Boyce. In 1994, the house having been allowed to deteriorate considerably was prepared for demolition with a subsequent proposed use as a parking lot for an adjacent billiard hall. These photos were taken in 1994.

OSPCA Cornwall kicks off “iAdopt for the Holidays” adoption blitz