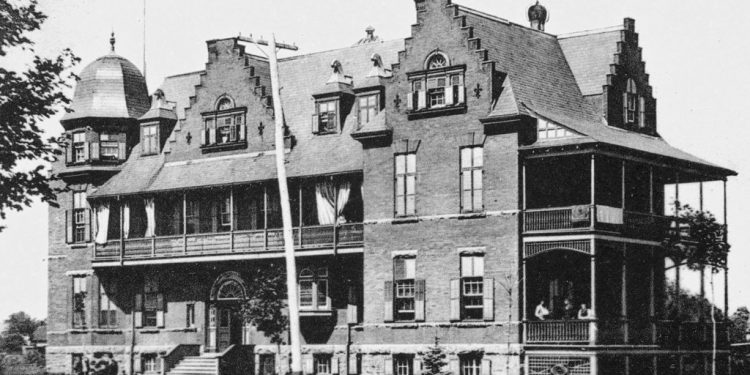 The Cornwall General Hospital opened its doors on December 29th, 1897, two days after a ceremonial launch. A year later, a large verandah was constructed on the east side of the building, as seen in the photo.

A few years later, the Colquhoun Memorial Home for nurses went up east of the hospital and was dedicated on June 3, 1914. A tunnel connected the two structures.

A major revamping of the hospital and nursing school resulted in a formal opening of a new modern wing on November 7, 1962. Several subsequent expansions and rebuilds resulted in a completely new structure, other than for the building which constituted the original nurses’ home.

The General Hospital’s School of Nursing produced its first graduate in October of 1899. 2019 will witness the 50th-anniversary reunion of the final graduating class of 1969.

The hospital closed upon the amalgamation of services at the former Hotel Dieu Hospital at 840 McConnell Avenue, now operating as the Cornwall Community Hospital.

The Care Centre held an Open House on March 19, 2016, having transformed much of the former Cornwall General structure into affordable seniors’ housing. I serve on a volunteer committee there for the purpose of creating a two-phase memorial to the hospital and its school of nursing.  The community contributed the $5,000 needed to create a mixed media commemorative in the main floor corridor and a designer has been commissioned for the task. We are currently raising funds for Phase 2, which will see a second corridor filled with vintage photographs of the hospital during its various stages of growth.

To make Phase 2 a reality, you are welcome to contribute funds as well as photographs and other artifacts for the project. Committee chair Sharon Porter (Class of 1969) can be reached in care of the Care Centre, 510 2nd St E. or by e-mail: [email protected]