by Editorial Board
in Locals in the Loupe
Reading Time: 3 mins read
41 2 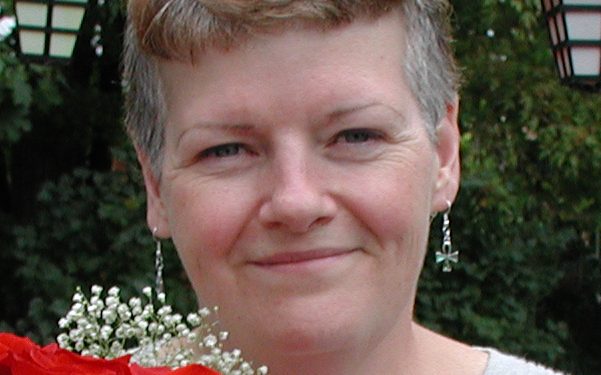 “I’m very excited to share with you, the last of the Teacher stories. It seems a lifetime has passed since writing the others-Mary Stewart, Muriel Chisholm, Isabel McLeod-Russell, Ingrid Snydal, Barbara Fisher, Lorraine Crites and Maxine Cole. Each taught me something about the human spirit and our capacity to believe that whatever comes is honest and good. Beatrice Jones may be from a different generation but she’s got that twinkle that sets her apart. I hope you’ll see it too and if you meet up with her someplace, tell her what you saw because we all need to hear it.”

I was coming out of the dentist’s in July when I bumped into Beatrice Jones sitting in the waiting room reading a magazine. I wondered if she remembered me as one of her students in Grade 10 Typing. It all happened so fast…when asking if she’d be interested in telling me her story.

We exchanged phone numbers agreeing to touch base within the month but then the note was misplaced-until one day I found a beautifully handwritten envelope slipped into the mail slot explaining what happened. Who does that sort of thing anymore, but great minds like Beatrice Jones?

Beatrice was born in Cornwall, the youngest of three children. Her Father Dolphis was an engineer working for Nor-Cross in Montréal who also did carpentry work. He was a wonderful person, having a quick wit and endless patience and would joke at the dinner table that his daughter had also become an engineer-like him, fixing the family car. His use of common idioms have traveled far with…‘Whatever you do, do it well’ and that ‘If you were able to help someone, then please do so’.

Beatrice’s Mother Philomene worked for three years at the Chateau Laurier. During the war years, she lived in a small room facing the river and was one of the few witnesses that on February 3rd, 1916 saw everything but the library of Parliament burn to the ground. She was a very contented person wherever she lived and loved seeing her children celebrate the freedom of their generation. Many years later, Philomene visited the Chateau Laurier with her Granddaughter, teaching the family’s history to another generation.

After the Depression, the family moved to a house on Sixth St. and Bea went to school at CCVS and was taught by Mary Stewart. When she was 16 years old, Beatrice met Ross Jones who despite being 9 years her senior was very witty like her Father, taking care of himself through exercise and good eating habits.

He was in the Air Force stationed in the RCAF working as an electrician on Lancaster Bombers. In camps overseas, Ross witnessed the many heroic acts of the Mohawk Code-Talkers and pointedly welcomed them at his table, making friends in his easy-going way. Ross’ respect for those soldiers prompted many conversations throughout his life making him the honorable man that he was.

Beatrice and Ross wrote back and forth through the war and were married after 8 years. Oddly enough Bea was able to keep working despite the code of the day, because her secretarial work was second to none. Having worked for 10 years at the main branch of the Bank of Montréal on Pitt St., she continued on at the Health Unit right after her son Robin was born.

After a few years, Bea needed a change so put her name in for the new High School program at GVSS, called ‘The Spare’ that put the right teacher with a student who was struggling in various subjects in one-on-one tutoring. Bea’s Mother felt she could be a good teacher and within 3 summers she got her degree teaching Commercial Typing and Stenography for Business Practice. In those days Typing wasn’t just hitting the right key-it was Personal Hygiene and Cleanliness.

Preferring the older students, Beatrice would let the Grade 12’s suggest what they wanted dictated. She taught them how to approach job opportunities-how to carry themselves/how to be professional. Bea was no-nonsense but everyone knew where they stood in preparation for the real world.

The link between Ross’ experiences overseas and this story is the keen sense of hearing of all the female Mohawk students whose fantastic work ethic saw most spend their careers at the Department of Indian Affairs in Ottawa. In a lifetime of accomplishments the experience of giving back is Beatrice’s Finest Hour, second only to the several hundred medals she’s won in the past 20 years for Canada in the Ontario Senior Games, in walking, bicycling and swimming…well into her 92nd year.

In her Mother’s footsteps and zest for life, Beatrice has realized another life-long dream…of how important and wonderful it is to volunteer at both the Tuck-shop at CCH and Cornwall Hospice. In one intake of breath with shining eyes no truer words are spoken… ”You get attached and then they go…”
Lisa Gray, Copyright @ 2018

I would love to have feedback from my stories…Please email me at: verlegrace4062@gmail.com

Lisa is a member of the Cornwall Writer Society, a group that meets at the Cornwall Public Library, on the 3rd Monday of each month from 6:15 to 8:15pm. For more info. about this or any program at the Library please call 613-932-4796.

Surprising Celebrities Who Hail from Cornwall