by Editorial Board
in Columns
Reading Time: 2 mins read
31 1 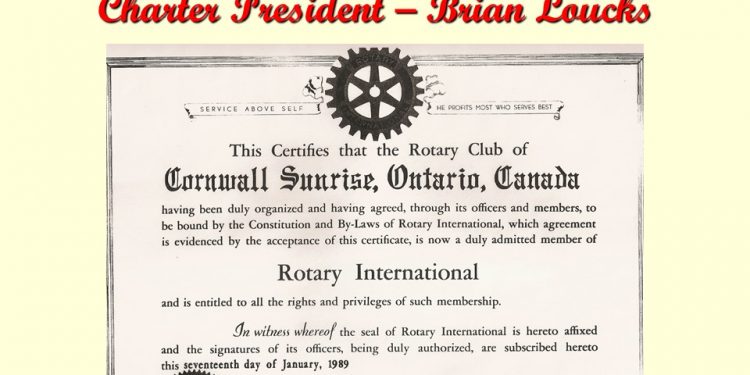 On February 27th, the Rotary Club of Cornwall Sunrise will celebrate 30 years of service to the Cornwall area and the world. An evening of celebration and fellowship is planned for former and present members, exchange students, Interact members, Rotaract and Probus members and Friends of Rotary.

Beginning with its Chartering on January 17,1989 this club has been a leader when it was the first club in Rotary International District 7040 (Eastern Ontario, Western Quebec & Northern New York state) to be chartered with female members… there were three. This was a time when women in Canada were just being admitted to Rotary. Later, this club supplied the District’s first and third female governors, Bette Miller and Katie Burke.

Since Sunrise Rotary was chartered, more than a million dollars have been raised and contributed to local projects both large and small, all with a focus on enhancing the quality of life and wellness of our citizens. Some beneficiaries of substantial financial contributions include the Cornwall Community Hospital Foundation; Hospice Cornwall Hospice; the Benson Centre ice pad; the Aquatic Centre; the Cornwall Outdoor Workout Centre; the Boys’ and Girls’ Club and the Children’s play equipment in Lamoureux Park. Significant financial support has been provided to enhance the endeavours of many other local agencies and projects that benefit mental health, youth, the arts and the general wellbeing of members of our community. Since 1998, the Adventures in the Environment program for aspiring young scientists, in partnership with the St. Lawrence River Institute, has opened the door for hands-on research in environmental studies

Activities to support and expand the local family of Rotary have been important. In April 1995, the Cornwall Probus Club was sponsored and established. An Interact Club at General Vanier Secondary School (until school closure) received world recognition several times during its 25 year lifespan as did it’s sister club at Rothwell- Osnabruck school. More recently, the family includes EarlyAct at Eamer’s Corners Public School, Interact at Char-Lan District High School and a community Rotaract Club. Over the years more than twenty young people have enjoyed a year abroad as Rotary exchange students.

A number of members have served as Rotary volunteers and have travelled abroad in support of International service projects which have been undertaken primarily in Central America and Ghana. Some of the current projects include a project involving education and treatment of neglected tropical diseases in Ghana. This project has led to Rotarian Peter Labelle being invited to address the World Health Organization committee on neglected tropical diseases which include Buruli ulcer, Yaws and Leprosy. Other current initiatives include a water project in Uganda and “Go With The Flow” which seeks to address the problem of girls in the developing world leaving school when they reach puberty.