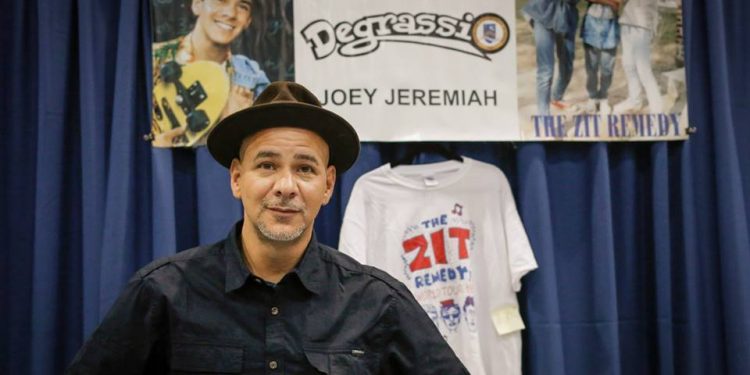 Article and photo by Jason Setnyk

Cornwall, Ontario – Degrassi actor Pat Mastroianni will be among the special celebrity guest at CAPE 2019. It’s the fifth anniversary of the Cornwall Area Pop Event. It takes places April 27th and April 28th, 2019 at the Benson Centre in Cornwall, Ontario.

At just 13 years of age, Pat Mastroianni would audition and become the iconic and beloved Degrassi character of Joey Jeremiah.

“I heard about the audition over the PA system at my real high school back in 1985. I thought it would be fun to try out for a real TV show. Even though it was on the icky CBC channel. It sounded to me like a fun summer job. I had no idea it would change my destiny,” Pat Mastroianni recollected.

According to fans who watched the show, the character of Joey Jeremiah was simply relatable.

“What I’ve heard from Degrassi fans over the years is that the Joey character was relatable. Everybody knew a Joey, was a Joey or wanted to be a Joey. In reality, Joey was a kid hiding behind his bravado with a need to be liked by everyone. He was a lovable goofball, but when you looked into his eyes you saw a shy, insecure guy that everybody felt a connection with,” Pat Mastroianni stated.

In adulthood, Pat Mastroianni revived his role as JoeyJeremiah for five seasons of Degrassi: The Next Generation. It was a completely different experience for the now-adult actor.

“It was a different vibe all around. It lost its innocent charm. Back in the day, it felt like going to summer camp. The second time around it was more mechanical. We had a set, not an actual school. The young cast had parents on set. Everyone had their own rooms for privacy. It just felt different. I took what I needed from the experience and felt fine with my contribution,” Pat Mastroianni noted.

Pat Mastroianni is a phenomenal actor and he won a Gemini Award for Best Continuing Actor in a Leading Role.

“At the time it was a nice “Pat” on the back. I appreciated the vote of confidence from the voter, but I knew I had a lot to learn. It helps me feel like I was doing a good job and that felt great,” Pat Mastroianni disclosed.

Pat Mastroianni and others have hit the road with The Degrassi Tour.

“It’s something that started small and has been growing like crazy. Long story short, we didn’t have social media back in the day. So, fans of Degrassi really didn’t have a way to connect directly with us. Nowadays you can live stream, follow, like, comment, DM your favorite celeb and see into their personal lives. I just wanted my fellow cast mates to feel that love and appreciation I’ve been lucky enough to enjoy over the years with my appearances at conventions,” Pat Mastroianni explained.

Outside of acting Pat Mastroianni has worked as a talent coordinator for The Characters Talent Agency.

“It was an interesting opportunity. Taking my love of pop culture, conventions, and public appearances and helping other performers book appearance too. I get to train young performers who’ve never appeared at these kinds of pop culture events. It’s a great way for fans to interact and have a moment with someone they’ve enjoyed seeing in film and television,” Pat Mastroianni said.

Nowadays Pat Mastroianni doesn’t do much acting, but he still keeps very busy.

“I’ve really backed away from performing over the last couple of years. Between talent appearances and creating DegrassiPalooza it’s a full-time job. Plus, I’m old. The brain doesn’t remember stuff so good. Barely speak English,” Pat Mastroianni said with a smile.

This is Pat Mastroianni’s second visit to Cornwall. He was also a guest at the first ever CAPE event back in 2015.

“I remember Carol and Randy taking us out for dinner the night before the event and having a wonderful casual meal with folks that were grateful to be there and no egos. I met my now friend Ming from Comic Book Men at that inaugural event. It’s one of my favourite shows because it really is about the attendees having a good time. I believe Carol and Randy just want to help their community, to bring something special to Cornwall and they’ve accomplished that,” Pat Mastroianni concluded.