New trucks and new regulations but basically the same crew. 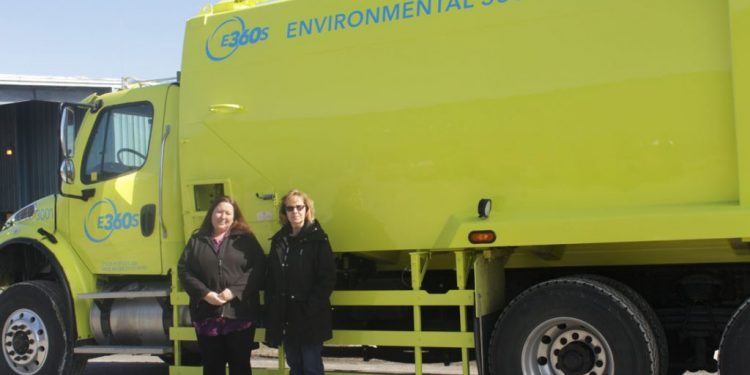 Article by Neil Macmillan and photos by Jane Macmillan.

Cornwall, ON – In photo above: Mother-daughter team of Linda Stabler (right) and Kim Parisien (left), who, as HGC employees, have been the operational hub of Cornwall’s municipal waste-management services in recent years, stand beside E360S’s state-of-the-art garbage truck that will start work in the city tomorrow morning. (Monday April 1st).

So far, so good in the preparations for Cornwall’s transition to a new waste management regime that kicks off on tomorrow morning (Monday, April 1) .

That’s when waste industry veteran Danny Ardellini, the dynamic and enterprising boss of the city’s new contractor, Environmental 360 Solutions (E360S), is coming to town to launch the new service in the first of the company’s state-of-the-art GPS- and radio-equipped trucks, accompanied by NHL hockey legend Paul Coffey, who is also a partner in the company.

In tandem, the City has informed residents about new bag/container limits and other related regulations, including the stipulation that loose items will no longer be collected.

Ahead of time, E360S’s Special Projects Manage Dave Reddy was in town this past Saturday (March 30th) to orient the new 31-member workforce at the recycling plant that adjoins the municipal landfill on Cornwall Centre Road. In photo above: Kim Parisien, E360S’s new Operations Manager for Cornwall looks on as Dave Reddy, E360S’s Special Projects Manager, orients the workers at the recycling plant this past Saturday morning.

Also on hand for the orientation was Danielle Watson, the city’s waste management supervisor who has been heavily involved in drafting the city’s new resource management policy. This policy is designed to increase the recycling diversion rate from the current 30% to as high as 60%, which would generate considerable extra revenue for the city, providing the city’s residents cooperate!

When City Council awarded the contract to E360S at its meeting on January 28 there was considerable concern that the 30 or so employees of the previous contractor, HGC Management Inc., would lose their jobs. However, according to Kim Parisien, E360S’s new operations manager, any such fears basically did not materialize since around 90% of the former HGC workers have been taken on by E360S, with some even receiving immediate promotions.

Nonetheless, the last HGC shift on Friday afternoon after some 28 years with the contract was a bittersweet time for some employees, especially operations manager Linda Stabler who, along with one other longtime employee, has decided to stick with HGC by moving over to another of its operations, Canadian Recycling Services on Second Street West.

Linda is Kim Parisien’s mother, and this mother-daughter team has essentially been the frontline hub of the city’s waste management operations for the past 19 years.