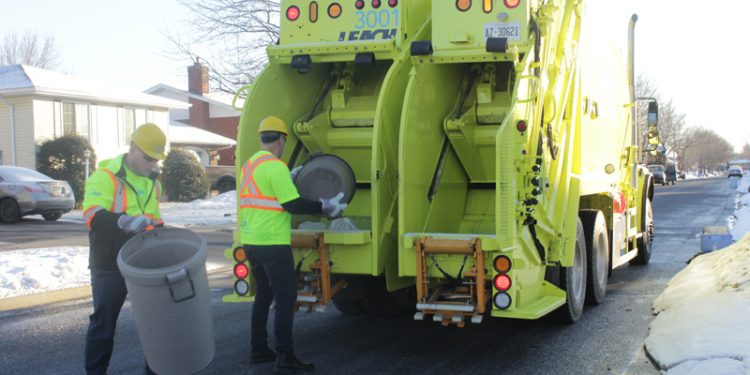 Article by Neil Macmillan and photos by Jane Macmillan

Cornwall, ON – For the residents of Belvedere Crescent in the Sunrise Acres district of east Cornwall, Monday morning (April 1st) might have seemed like just another garbage day.

Some of them might even have noticed the bright yellow Environmental 360 Solutions (E360) truck with its driver and two pitchers. However, unbeknown to them, one of the pitchers was actually NHL hockey legend Paul Coffey who was briefly in town to help launch E360, a company in which he is part owner.

In the photo above – Paul Coffey (on the left) pitches garbage into the left-hand chute, while his co-worker Sam Dugas gets ready to replace the bin he has just emptied. Not seen is Gino Myre, the driver in the cab. All the new garbage trucks in Cornwall will eventually be like this one, featuring separate chutes for garbage and recycling on a 60:40 split.

Earlier in the day, Coffey had given a pep talk to the E360 workforce at the recycling plant next to the Cornwall landfill, posed for selfies with the workers, and distributed signed photos of himself.

E360 Operations Manager Kim Parisien said that she was “really happy” with how the first day went. She said that there seemed to be a real team spirit and the employees were thrilled to spend time with Coffey and company CEO Danny Ardellini, both of whom had travelled from Toronto for the launch.

E360 CEO Danny Ardellini (above) took lots of photos, including one of his entire new workforce (below) in front of its first truck in company colours, together with his Special Projects Manager Dave Reddy (kneeling far-left in the front) and Cornwall City’s Waste Management Supervisor Danielle Watson (standing far-right).

Women Entrepreneurs (WE) gets a face-lift for its 20th Birthday