“A Comedy of Tenors” starts next week

by Editorial Board
in News and Announcements
Reading Time: 2 mins read
41 4 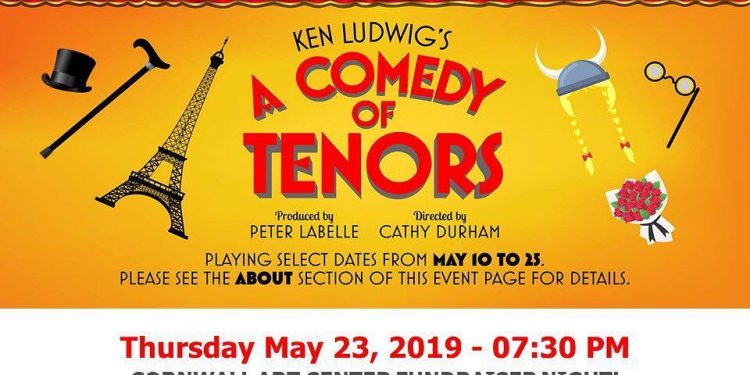 The Seaway Valley Theatre Company concludes their 2018-2019 season with their production of Ken Ludwig’s
wacky operatic comedy, “A Comedy of Tenors.”

One hotel suite, four tenors, two wives, three girlfriends, and a soccer stadium filled with screaming fans. What
could possibly go wrong? It’s 1930s Paris and the stage is set for the concert of the century – as long as producer
Henry Saunders (Andy Davidson) and his long suffering assistant, Max, (Joseph Ianni) can keep Italian
superstar Tito Merelli (Michael Galvin, who also doubles in the role of Beppo) and his hot-blooded wife, Maria,
(Lacie Petrynka) from causing runaway chaos. Prepare for an uproarious ride, full of mistaken identities,
bedroom hijinks, and madcap delight, written by America’s foremost farceur.

Rounding out the cast are Mike Chatelain as Carlo Nucci, Ashley Elms as Mimi, and Guylaine Galvin as
Tatiana Racòn. Director Cathy Durham is no stranger to the plays of Ken Ludwig, having directed successful
productions of “Leading Ladies,” “Moon Over Buffalo,” and “Lend Me a Tenor” for the SVTC in past seasons.
Making his début as producer is SVTC Vice-President Peter Labelle.

Of particular note is the May 23rd performance, which will be a special fundraising event for the Be the
Link/Soyez le Lien campaign. All proceeds will be donated by the SVTC to fund the building of Downtown
Cornwall’s new arts and culture centre. To learn more about this initiative, visit www.bethelink.net.

For more information about the play, visit . Be www.svtc.ca sure to follow the hashtag #SVTCComedyofTenors
on social media, too.