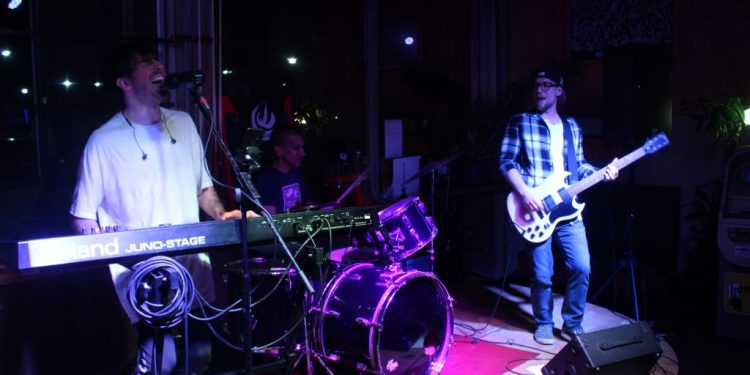 11:10 pm – a hypnotic instrumental entrances the crowd at Lola’s Pub and Grub as singer Brandon Mignacca steps up to the mic. His band is about to break into a cacophony of distortion and aggression all punctuated by his operatic vocal wail, yet he has no idea how his voice is going to sound.

Because ten minutes ago he found out the monitors aren’t working on the soundboard.

Hours of traveling from Quebec, loading and unloading equipment, and prepping for the gig, all at stake because he won’t be able to hear if he’s singing in tune or not.

But the show must go on.

As he opens his mouth a playful smile comes over his face.

Here we go. Make or break it time.

And damn does he ever deliver.

Belting out an emotionally filled ferocious wail, he nails the note and stirs the crowd into a frenzy as the band kicks in and the rest becomes history.

Their sound is Soundgarden meets Muse. An explosion of distortion, melody and roll your eyes back incredible vocals. They’re a three piece band bursting with jaw dropping talent and an unreal rhythm section.

We have drumming extraordinaire, Gopal Devanathan on drums who sites Frank Zappa and Led Zeppelin as influences, and it shows. He’s precise, always on beat and while he doesn’t pound the kit he somehow gets extraordinary sounds out of his drums.

Then on guitar we have the cool and calculated, Rob Flis. This guy is all about technical precision but still retains enough soul to give the music life. Phenomenal player.

And leading the way is their aforementioned lead singer, Brandon, a virtuoso piano player with killer pipes.

Each member is a craftsman and watching them play is like watching jazz with head banging.

They rocked the Lola’s crowd with hair raising originals, had them singing along to piano led renditions of Green Day’s, American Idiot and June Carter’s, Ring of Fire, but what made their set great was their ridiculous interactions with the audience in between songs.

From trash talking Baxtrom’s Independent Grocers for having two names (does anyone call it Baxtrom’s?) to getting into joke fights with fans in the crowd it was clear that while these guys are top tier musicians they don’t take themselves too seriously.

It was a stellar show from a stellar band and I can’t wait for them to return.