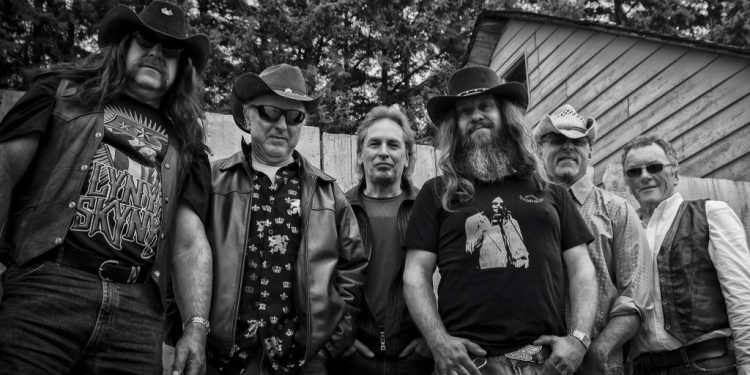 The simplest answer is there’s something for everyone – die hard fans and casual fans alike. Everyone has rocked out to Sweet Home Alabama at some point in their lives. The simplicity of recreating that moment is a perfect reason. The other thing that attracted me was, in a crowded world of duplicate tributes (according to our singer Matt Bunt there are  currently 12 AC/DC Ontario tributes and counting!) there seemed to be a void for a good Skynyrd tribute, and at the time the original band was not touring, so it seemed like a great idea for fans wanting to hear the music live. Also, concerts today are just so expensive, so it is way to get your fill of the Skynyrd catalogue with out breaking the bank. From a staging perspective its very practical and doesn’t require effects, extravagant costumes like KISS or Beatles would.

Not every band merits a tribute in my opinion – often the depth of a classic band’s catalogue is really enough for a whole night for true fans and definitely not not satisfying for an average audience. But Lynyrd Skynyrd is a legendary rock band. Like Zeppelin, the Who, the Stones, they helped define the 70s classic rock genre, specifically guitar-based rock. Don’t forget at the time (mid-late 70’s) they were one of the highest grossing live acts. With the opening guitar riff to Sweet Home Alabama, they cemented that legendary status but they were never a one hit wonder; they have a great catalogue of classic songs like Call me the Breeze, Saturday Night Special and Gimme Three Steps. They were a hit machine over the 70’s decade reaching international audiences.

And they had a legendary front man and leader in Ronnie Van Zant – one of the original badasses of rock and roll. And yet his lyrics endure way beyond the image. Fans sing along all the time. The band embodied what is now known as the Southern Rock genre with their music and they also started the 3-guitar band phenomenon – something captured perfectly in their anthem Freebird. How can you top that?

For me, as a guitarist, it’s a once in a life-time opportunity to play challenging, fun rock music that people love. When I first started with Symply Skynyrd I had no idea the depth of the Skynyrd catalogue, in the music and the lyrics – I was fan – I did love their Street Survivors album, but I was not a die-hard. I. However after studying the music and band for two years, I can say they were very accomplished and disciplined, committed players who wrote with lots of emotion in the lyrics about real life experiences for the most part. I thought, like most people do, they were just a rowdy band for the rednecks. A lot of that image was PR and marketing.

How did you get into being a tribute band?

I answered an ad for a “guitarist wanted” for a Skynyrd tribute band forming. It was sort of like online dating for musicians; it was really like going to a blind date. I walked into a room of strangers and we just started playing. I’d played in cover bands for a while and had done a short stint in an Aerosmith tribute so I knew the game a bit. So after line-up changes, I became defacto band leader and now two years laters here we are with Symply Skynyrd. It’s been a fast-growing success for a relatively new band.

2- How do you get in the zone?  Anything you do before a show to “become” Lynyrd Skynyrd?

We try to get it right every show. We practice like crazy all of us. One thing I try to do is sit with my guitar and play along to the recordings of their live shows before a show to get in the headspace accurately. For the rest of the band, we do have our stage presence that each of us “wears.” That includes period correct clothes, guitars and so on. Our singer goes barefoot like Ronnie did. He wears the Neil Young t-shirt like Ronnie did. So we try to bring the flavour of the original 70’s band in the look but we are not look-a-likes because I don’t think we need to be. Skynyrd was known for the music and that’s what we focus on. We do try to bring passion to live shows and put on a memorable show – rather than just play our best.

3- Do you ever struggle with doing stuff that is not your own.

Good question! The answer is ‘yes’ but not in the way you might think. It’s a challenge to play other people’s music sure, but over time you get a handle on it, if you practice and commit to learning it.

From the guitar stand point Skynyrd was always a ’guitarists’ band first and foremost. In reality, there were four, monster guitarists over the 1970s – 77 period we cover,: Allen Collins, Gary Rossington, Ed King and the fabulous Steve Gaines. Each had his own style and ‘personality’, and the key is to take on that personality during the songs and solos. So you have to be them – not yourself. If that makes sense. People don’t want to hear you; you have to restrain your style almost entirely. That takes a certain discipline I guess.

This band plays Skynyrd like the recordings which means no improvising! I think that is one thing that sets us apart. I have seen other Skynyrd tributes that take liberties – they add parts to the music, or change signature solos. But if you come to a Symply Skynyrd show, you will never hear that. The entire band – vocals, keys, drums and bass all strive to preserve the original details in the songs, arrangements and the melodies. Skynyrd fans often personally thank us for capturing the details of the recordings.

Where it gets really interesting is, Skynyrd was always a three-guitar band live and Symply Skynyrd is a two-guitar band by choice. So with us, myself and the other Symply Skynyrd guitarist, Laurence Fontaine, we each split up our guitar duties of three distinct guitar personalities. Laurence and I have to be all of those people, at different times, and sometimes in one song! As an example, in T for Texas, I will play Gary Rossington’s parts – with this style, nuances and tone and then have to shift quickly to Steve Gaines, and do his slide style – all in split second. The trick is to do justice to both and its not always easy! But we love it.

4- How do you handle being constantly on the road?

Well, we all get along. That helps. The band, including keyboardist Russ Morrow, bassist Ernie Pegutter and drummer Don Guillet and the rest of us have become good friends. Also, we are fortunate to be in demand but also to have choice in where and how often we play. Last year we did almost 50 shows I think, and this year we scaled back so we can be more focused on bringing the best of the show to right audiences. We do love the excitement of a new venue and have become road warriors but by no means are we covering the miles of a full-time touring band. We’d love to do shows in Quebec and the east coast though. Have guitar, will travel!

What is one item you can’t travel without.

Besides wet naps, Travellers cheques and my pocket bible and oh, yes… guitars, I would say my slide. No slide, no Freebird!

5- What do the members do when they aren’t covering Skynyrd? Are you in other bands?

Most veteran players are often in several bands and we are no exception. Most of us are in other bands or projects at some point or another. I guess the passion for music just can’t be contained to one band? When you put in so much time on the instrument, so much money into the equipment you want to make the most of it! None of us are in another tribute however. Symply Skynyrd is the only tribute at this time.

Where can we catch you next?

This summer in the east, we are playing Cornwall Ribfest July 25 and Warkworth Musicfest, July 26. In the west, we’re playing Port Dover Friday the 13th of September. We also play select bars from London, ON to GTA. Fans can always catch up with us and festival or bar shows on Facebook under “Symply Skynyrd Canada” or www.symplyskynyrd.com

All About California Wine