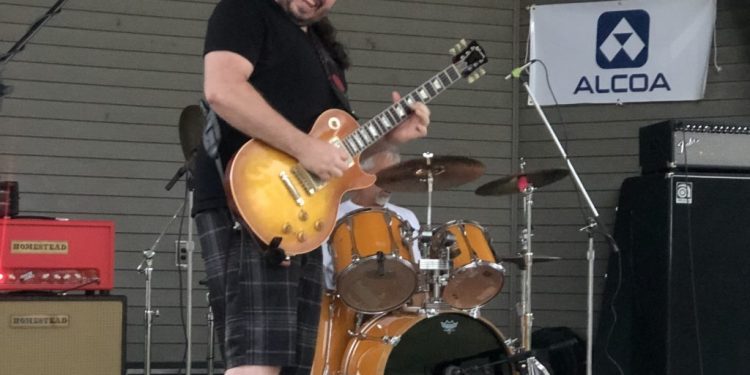 The Tracer James Trio is a recognizable name in the area. The Power Trio of Rock has been performing an extensive repertoire of songs ranging from Hendrix to Gov’t Mule for quite some time in and around Massena. So now that the boys are set to do their last few shows together, as bassist Don Shanty Jr. is moving away, it will undoubtedly mark the end of an era for them.

But Tracer James has bigger aspirations.

The charismatic, 43-year-old talented musician has his eyes set on the big stage. And talent may drive him there.

Our area flourishes with a fantastic amount of untapped, and undiscovered musically gifted people which bids this question: why take an interest in this guy? What makes him noteworthy? The answer is simple.

His passion is thick, heavy, palpable. Tracer can effortlessly make you feel the transcendental connection he has to his guitar. His playing will touch your soul on a deep, deep level. His tone will make your core vibrate. And seeing him perform live will only exponentiate the experience.

Here are my ten questions with Tracer James

1-How old were you when you started playing music, and how did you get into it?

The first time I ever performed, I was five years old. And then the first gig with a band, I was about thirteen. I started playing regularly in a band when I was fourteen. Before that, it was playing a lot at home, practice, practice, and play. I actually started on pedal steel guitar and then didn’t start playing guitar until I was about seventeen. I started off playing country music. At the time, I was surrounded by country music players, so that was my only way to get into it. My father had played pedal steel, but he didn’t teach me anything. A friend of mine named Bruce Covert is the one who actually got me into playing steel.

2-What are your biggest influences?

My biggest influence, obviously, has been Warren Haynes. He’s just been awesome. He’s been a really good friend. He’s been a human, he’s not unapproachable. He’s not like a star at all. Even though he’s like huge, he’s a regular person which is really rare for that kind of player. He’s probably the best musician I’ve ever heard, and he’s just the nicest guy which is the rarest thing to find. Not only he writes great songs, but he sings amazing, and he’s a great guitar player, how do you beat that! Very friendly and very down to earth.

I learned to play guitar from a man named Louie Vezina, he’s the one who got me into playing guitar. And that was still country, I was playing my telecaster and playing hee haw tunes, and that was fun, but then my ear started listening elsewhere, you know, and getting introduced to these other players, guys like Roy Buchanan and Danny Gatton and that started to lead me more into the blues-rock scene. But I don’t like to “genrize” myself because I play so much that I don’t like to sell myself as a “type” of player. I sell myself as a guitar player, and then I can adapt to whatever genre I wanna play. Cause otherwise you get stuck, and they label you.

3-In 2013 you were picked by Joe Bonamassa as one of the top 10 Guitar Players to perform in the Guitar Center’s Blues Masters Contest. Tell me about that.

That was amazing! A buddy of mine actually talked me into doing it. I wasn’t gonna do it but he kept saying you gotta enter, you have a shot! So I put up the video, and next thing you know, I get a phone call while I was teaching. They said, are you available to come to Los Angeles on a certain day, and I was like why, and they said Congratulations, Joe Bonamassa picked you as one of his top ten new guitar players. This was out of 2600 guitar players. I remember flying in, and they had limos waiting all for us. And of course I got picked to play with him first out the whole ten. And the funny part of the whole thing is that when we went up to rehearse just playing, I actually corrected Joe on his own song! And it was hilarious cause he’s like “holy shit Tracer, you know my damn song better than I do”. It was a huge experience and he was so great to everyone… He’s another one of those guys that you can keep in touch with.

4-Do you ever get performance anxiety?

I don’t. It’s been so many years. I’m more at home up there than off the stage. When I go see a band, I feel more awkward than I do being up there.

5-What are the most prominent stages you’ve played?

Well playing with Joe was one. And I’d have to say any stage that I actually played with my buddy Jimmy Phillips is one. That guy is just an unbelievable musician. He was Columbia Records number one keyboard player in California. So I grew up playing with him in my teenage years and my twenties, and I learned so much from him. So playing with him, it didn’t matter how big the stage was, it was the level of the player, ya know? Not about the venue. But of course you don’t get that energy (from small venues) that you would from the bigger venue, which is more of what I’m looking to do now, I’m just trying to grow into a bigger area to be able to do what I do, because it is well supported there, where it is so hard here.

6-You do a lot of covers, but what about original material?

I’m writing original stuff, I haven’t really played any of it out only because the area is not the right market… I’m not blaming anyone here, it’s just that music is so limited up here in what they know. I don’t see myself fully as a music writer, I see myself number one as a guitarist. Trying to get into the world of being the headliner, anything like that, is nearly impossible, and I’m not a fan of the commercial world. I’m not a fan of commercial music, and I just don’t like how you’re presented that way. In my opinion, it’s more how you look. They don’t go and listen to a concert anymore, they watch a concert. Personally, I want to hear how good it sounds.

7-What is the biggest challenge you face as a musician trying to pierce the market?

Reaching the people who are actually listening rather than watching. Making the right connections, that’s the toughest thing and I’ve been so lucky to find guys that are in it that point me in the right direction. They’re not doing it for me but they tell me where to go look.

8-What makes you different?

I don’t try to copy anybody else.

9-If you could change anything about the music industry, what would it be?

For it to become an auditory experience again, not such a visual one. You know when they said video killed the radio star, it’s not far from it. Since I got back into the vinyls, and listening to those, music has become more enjoyable again because when you throw on a vinyl, you actually sit down and listen to the whole album, you don’t get up and change the tracks like you would do on a CD. And a lot of the albums actually have a whole story if you do that. What’s your favourite album? I’d have to say Gov’t Mule Dose. It’s so raw, but it’s so well done, and it’s just three guys who went in and played and it wasn’t altered in any way, and to me that’s music. It’s like anything that I record, it is not altered. When I put my name on something if I can’t reproduce it, there is no sense of playing it because otherwise it’s a let down.

Homestead Amps have given me the Best Tone I have ever heard. Purest in Sound. The word Real comes to mind. Peter McMahon is the Greatest Guy, he knows Tone and how to help you achieve it. You couldn’t ask for a better guy, and always there to help. Homestead is my #1 choice!!!

Bonus Question-What’s next for Tracer James?

Continually pushing, starting to make trips, pushing myself as a solo guitarist instead of a person in an actual band… I don’t want to be the guy in the public eye, but my ultimate deal would be to find a band that’s into the kind of stuff that I want to play who needs a guitarist. That’d be perfect. And that’s big enough I would think, because any other form of it, if you do become a hit, you always have to trump what you do, cause it’s never good enough. Almost better to become a one-hit wonder and disappear. (Laughs.) Make your mark and get out!

Info on Homestead Amplifiers can be found here
https://www.homesteadamps.com/

Interview with The Messthetics and Fugazi drummer Brendan Canty