Interview with The Messthetics and Fugazi drummer Brendan Canty 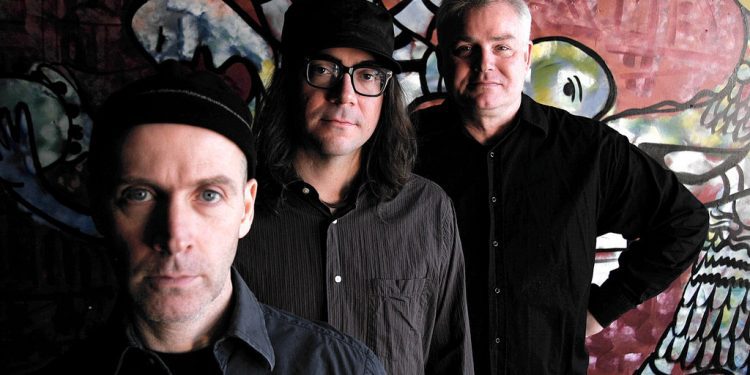 Ottawa, Ontario – Experimental and instrumental rock band The Messthetics are playing The 27 Club in Ottawa on July 17th, 2019. The Washington D.C. trio consists of drummer Brendan Canty, bassist Joe Lally, and guitarist Anthony Pirog. The last time Brendan Canty and Joe Lally were in a band together was in Fugazi.

Ian MacKaye, the singer of Fugazi and Minor Threat, is the co-founder of Dischord Records. He attended The Messthetics first show and signed them to the iconic record label.

“Ian is a very close friend and would’ve been there whether or not he was also a label boss. But yes, he was at our first show and said he loved it and that we should put out the record on Dischord. Considering Dischord has been my record label since 1981 when I was 15 years old, and they have been nothing but hardworking and upstanding, it was a no brainer. DC is a small town filled with friends and Dischord is a label designed to document its music history. I can’t imagine being on any other label, everyone there is so lovely,” drummer Brendan Canty replied.

The Messthetics self-titled debut album came out on Dischord in March of 2018. The album was recorded live off the floor in Canty’s practice room. This recording process helped the band achieve a raw and authentic sound.

“Yes, we’ve integrated the recording process into our rehearsal process so we can better capture the spirit of a piece of music as we are feeling it. Often in the past, the initial inspiration for a piece of music gets forgotten by the time you get around to properly recording it. Having all the mics set up and recording during our practices seems to solve that problem. And we often return to an earlier approach or take from before we screwed it up. It’s like leaving breadcrumbs behind to find your way home,” Canty elaborated using a simile.

Later this summer, The Messthetics are releasing their sophomore album titled “Anthropocosmic Nest”.

“Our next record is called “Anthropocosmic Nest”, and it’s coming out on September 6th on Dischord. It feels even more like the band does live but also has a little bit of overdubbing here and there. I’m very excited to have it out,” Canty said.

The first single off the new record is called “Better Wings,” and it can be streamed off The Messthetics Bandcamp website or via the Dischord Youtube channel.

Despite Joe Lally being an accomplished vocalist, The Messthetics choose to be an instrumental band instead. Without vocals or lyrics, the tone and tempo of the music are crucial to communicating emotion and meaning for the listener.

“Initially I thought we would be Joe’s backup band because he is such a great singer. He brought back a bunch of music from Italy, when he moved back to DC, that he had been working on, and I thought that we would be possibly working on that. He had been recording with some pretty accomplished players over there, and I immediately thought of Anthony when I heard the guitar tracks that people had put on them. Once Joe and Anthony and I started to play together though, the entire process took on a more organic form and got a bit louder, and it took on a life of its own. We’ve been able to remain pretty prolific since day one. There’s never a shortage of ideas, just a shortage of time,” Canty went on.

Brendan Canty is happy to be reunited with Joe Lally. The two had amazing chemistry in Fugazi, and they continue to make phenomenal music together with The Messthetics.

“Well, Joe is my favorite bass player, and I don’t play with anyone else as I do with him. The only way to describe it is that he gives me a very solid foundation on which to play. If he weren’t so stable, I wouldn’t be able to do half of the f#cking around that I do. I would have to do boring stuff like keeping time. He’s also a lovely guy with a lovely holistic view of life and music and a great friend. It’s absolutely a dream to have him back in the U.S,” Canty disclosed.

The two are joined by Anthony Pirog who is a virtuoso guitarist with a background in jazz.

“I was a fan of Anthony’s for a while and was looking for ways to incorporate him into my projects, but couldn’t find the perfect one until Joe came back. In fact, if you need a guitarist, Anthony is the perfect fit for any project because he is one of the best improvisers in the world. I’ve seen him play every style of music with every kind of musician imaginable, and he manages to integrate and improve everything he touches. It’s impressive. He is also a lovely guy, a great communicator, and hard worker who loves the road and has very out taste in music. He is my kind of guy,” Canty beamed.

The history of Fugazi is impossible to ignore, they are a notable band with far-reaching influence in the underground music world. There are Fugazi fans at The Messthetics shows. Those fans might notice some similarities in the songs, but it’s not the same music from 30 years, and it’s not playing songs like “Waiting Room”. For Canty, this sense of newness creates a liberating and joyful experience while behind the drumkit.

“It’s always positive because Fugazi fans from my experience are deep listeners. I think there’s a certain amount of our sound that touches on moments that Fugazi forged, but it’s also very different. I wouldn’t want to be going back in time anyway. I feel alive and happy and present in the moment while we are playing. I don’t feel like we are playing 30-year-old music. I feel liberated from the computer and all the corporations that put themselves between us, and happy to be hitting things with sticks and utilizing 500-year-old technology,” Canty noted.

The Messthetics put on a phenomenal show, and fans will have the opportunity to get lost in the abstract and sublime of the melodies.

One of Canty’s favorite songs to play live is “Serpent Tongue”. It was the first single off their debut album.

“I love Serpent Tongue because it’s a song that always changes and is easy to get lost in. I try like hell to lose myself in the performance every night. To feel comfortable enough to hear and communicate on a completely telepathic level. But it doesn’t always work. Sometimes the body gets in the way,” Canty articulated.

Spectrasonic is promoting the upcoming show with The Messthetics in Ottawa.

“We are looking forward to coming back. Shawn Scallen, who is promoting the show, is one of our oldest friends and we can’t wait to see him and to play. Ottawa holds a special place in our hearts,” Canty concluded.

The concert takes place Wednesday, July 17th at The 27 Club. The event is 19+, doors for the show are at 8 pm, and the show starts at 8:30 pm. Tickets are $13.50 and are available at Vertigo Records or online. For more information on the concert visit the Facebook event page.