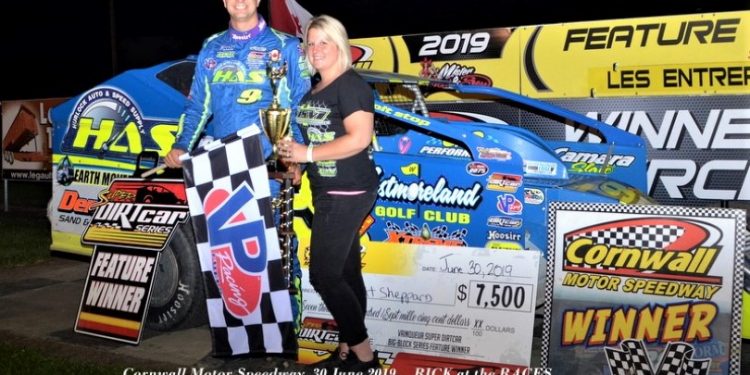 Cornwall, Ont – The big blocks were in town this past Sunday night! The Super DIRTcar Series was making his annual stop with a 100-lap event with the winner getting $7,500! The Sportsman and Mini-Stock were also on the card on les Entreprises ICM night.

Mat Williamson and Corey Wheeler were on the front row of the O’Canada 100 Super DIRTcar Series Feature as Wheeler took the lead over Williamson and Matt Sheppard in third. Wheeler got a lead over the field as Sheppard took second on lap 8 and set sights on Wheeler. Sheppard used the inside lane to take the lead on lap 10. The leaders were in heavy traffic by lap 13. Danny Johnson used his experience as he maneuvered to the lead from 4th on lap 15. First caution was out on lap 20 for Mike Mahaney. On the restart, Danny Johnson took the lead with Sheppard closely in second and Billy Decker moving to third. The battle was going on for the lead with 35 laps in the books as Sheppard used the outside lane to regain the lead on lap 39. The leaders were back in heavy traffic as Johnson went off in turn 4 and lost several positions as Larry Wight moved to second. Sheppard in front as Steve Bernard made his way to the top 3 after starting in 17th. Sheppard was strong in front as Wight and Williamson were the front 3 with 20 laps to go. Sheppard led the final 20 laps to capture the feature over Wight and Williamson. Matt is seen in the photo above with his wife Bethanne.

Robert Delormier took the lead in the 25-lap Next Level Home Improvement Sportsman with Shane Pecore and Moise Page behind the leader. A lap 3 restart saw Delormier leading over Page as the two drivers pulled away from the field with Ricky Thompson now in third. Delormier got into traffic by halfway point with Page trying to close the gap. Delormier put on a clinic and broke the winning streak of Shane Pecore. Delormier finished in front of Page and Thompson.

In the Tracy Wheeler Assist2Sell Mini-Stock 15-lap feature, Justin Jodoin led the way in front of Alexis Charbonneau and Yannick Potvin in third. The top 3 had a good battle with Potvin moving to second on lap 4. Potvin used the inside lane to take the lead over Jodoin on lap 8 with Charbonneau in third. A few cautions slowed the field down, but Potvin managed to keep the lead and got his first win of the season over Jodoin and Tyler Lamarche on the third step of the podium.

Don’t miss out next week as the DIRTcar Pro-Stock Series is making a stop for a 50-lap event along with a full program and the Quebec Mini-Modified also on the card for their annual visit.

Interview with The Exploited playing 77 Montreal on July 26th