Interview with The Exploited playing 77 Montreal on July 26th 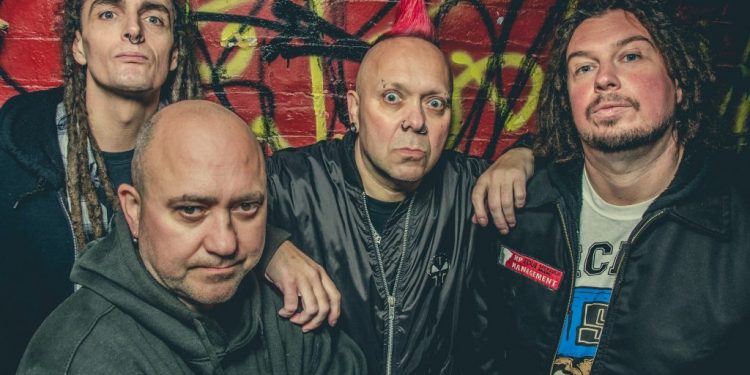 Montreal, Quebec – Legendary punk band The Exploited will be among those headlining ’77 Montreal which takes place July 26th at Parc Jean-Drapeau in Montreal. Also headlining are Bad Religion, Pennywise, and Streetlight Manifesto. Over a dozen other bands are playing the festival too, including Bigwig, Pulley, Gutter Demons, and OFF!

The Exploited are a Scottish hardcore punk band that formed 40 years ago in 1979. They have delighted fans with their fast, aggressive music and rowdy concerts for decades. The Exploited consists of Wattie Buchan, Wullie Buchan, Irish Rob, and Matt Pigeonboi Justice.

Their debut studio album and title track “Punks Not Dead” was a reply to the notion that punk is dead. In 1978, Crass wrote, “Punk is dead.” In 1986, Jello Biafra of the Dead Kennedys wrote “Punk’s not dead, but it deserves to die” in their song “Chickenshit Conformist.” After all these years, who had it right?

“We had it right as we are still here,” said Wattie Buchan, lead vocalist of The Exploited.

Many bands have cited The Exploited as an influence, and bands like Slayer and Ice-T have covered their songs.

“We do it better, but I really like Slayer and Body Count,” Wattie noted.

The Exploited have released 8 studio albums including “Punks Not Dead” and “Beat the Bastards”. The band also has released live albums, compilations, split albums, EPs and singles. Their last studio album titled “F#ck the System” came out in 2002. Will The Exploited release a new album?

“Yes, if and when we get our finger out. We would be doing our next record with Nuclear Blast. Nuclear Blast has been great with us we really should have had a record recorded by now, but I need to write some lyrics as we have a lot of great songs actually written,” Wattie disclosed.

Many bands have been releasing music through crowdfunding; however, this is something The Exploited would not consider doing.

“Crowdfunding, I would never do that as it’s like begging,” Wattie explained.

It was reported that in February 2014, Wattie Buchan suffered a heart attack on stage during a performance in Lisbon. Despite ongoing health issues, Wattie continues to play music.

“I have had 5 heart attacks, a quad heart bypass, a gastric bypass and then almost died in a theatre 2 years ago. Also 6 months ago I got a heart pacemaker fitted. So in the last 5 years, I should have died 6 times, and the doctors tell me that they don’t know how am still alive. But just like punk, I refuse to go yet,” Wattie remarked with a laugh.

The Exploited are looking forward to playing in Montreal again. In 2003, 500 fans started a riot when their concert was canceled.

“I have always loved Canada. My great-grandad is from Canada; well, he was – he is dead now! Yeah, over a million dollars damage (in the riot)! They should have let us in,” Wattie replied.

Fans can expect to hear many of their favorite songs from The Exploited at ’77 Montreal. Wattie identifies two songs he especially enjoys playing live. Don’t be surprised if these two songs are included on the July 26th setlist.

“We are all excited about coming back to Canada even if we have a shit time slot on the festival. We are going to smash it,” Wattie concluded.

The Exploited are playing the main stage of ’77 Montreal at 6 pm. Tickets are available online.