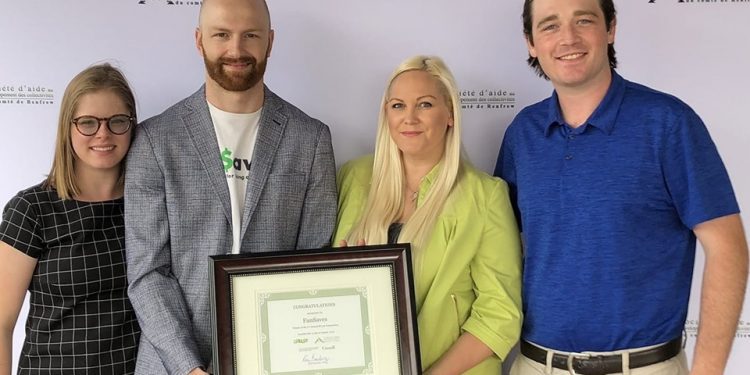 FanSaves is a platform that helps sports teams and other organizations (including towns and BIAs, e-sports, events, universities, colleges and influencers) activate their fan base and increase engagement. The mobile app gives fans discounts and deals from sponsors of their favourite teams and organizations. Each redemption is tracked in a dashboard, unique to their team or business, giving them customer analytics and a way to track return on investment.

Co-founded by Shannon Ferguson and Kris McCarthy and headquartered in Cornwall, Ontario, FanSaves is well acquainted with growing their business from a rural location and is looking forward to driving economic growth in Renfrew County.

“We want to prove that you don’t have to live in Silicon Valley to be a successful tech company. We want to show the world that Renfrew County is THE place to do business and we want to prove that a rural county can help produce a world-class tech startup. The RC100 investment will make this possible” said Ferguson.

The competition, which began in February of this year with 28 entries, officially ended Wednesday at the SRB Technologies Inc. RC100 Startup Reception held at the Pembroke & Area Airport.

“We are excited to be backing FanSaves” said Ray Bonenberg, Chair of Renfrew County CFDC’s Board of Directors. “The innovative software is impressive but even more so, the people who are behind its commercialization. Congratulations to all.”

To further extend their economic impact, the startup will be running the FanSaves Innovation Project in Renfrew County this fall; giving people the chance to help the co-founders solve challenges they have faced along their startup journey.

“We’re so happy to be able to give people in Renfrew County the opportunity to really impact our startup and in turn give people job opportunities that can really launch them into an exciting career” explained McCarthy.

The two-year old startup has seen much growth in the past couple of months and are in discussions with major leagues teams and an entire junior hockey league in the US. The platform now features 20 teams from across Ontario and in the United States including teams in New York, Connecticut and North Dakota.

Next up for the business on the pitch circuit, FanSaves has once again been selected as a Top 100 Startup of the Year Semi-Finalist and will be competing in the international competition in Memphis, TN in October. The duo also participated at the Global Get in the Ring pitch competition in Berlin, Germany in June, where they represented Canada.