by Editorial Board
in Sports
Reading Time: 2 mins read
59 1 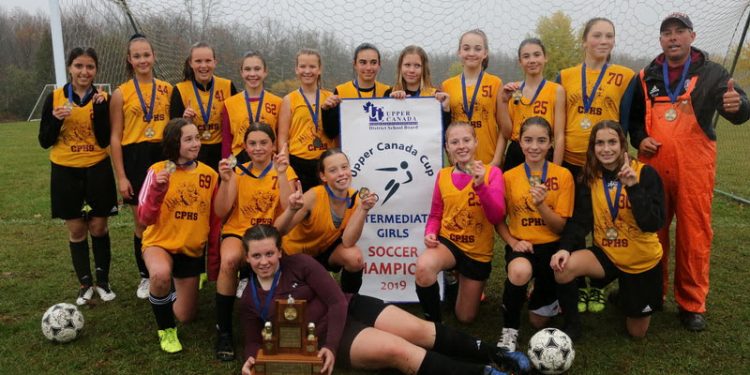 The Pirates jumped off to a 2-0 lead in the first half. Midfielder Isaiah Beckstead scored on a well-placed shot, just inside the right post from the top of the 18-yard box. TISS Striker Gavin Clarke later sent a left-footed shot in the same area of the net. With eight minutes left in the first, North Grenville mid-fielder Owen Smithers slipped a shot past TISS goaltender Garrett Grandia to make it 2-1 at the half.

North Grenville started with the ball in the second and striker Lukas Leroux capitalized, tying the game with an in-close shot. With 10 minutes remaining, Beckstead fired a shot off the far-right post past the outstretched arms of North Grenville keeper Frankie Onasanya. Six minutes later, Clarke one-timed a cross from 12 yards out into the back of the net to give TISS the insurance marker.

In the girls’ championship, the CPHS Bears won 2-1 over NGDHS. CPHS set the tone for the game with a goal about a minute into play. NGDHS centre back Grace Henderson tied things up on a penalty shot halfway through the second half, eventually sending the game into overtime. A minute into overtime, CPHS midfielder Abbey Swallow sent a pass to striker Katie Dolliver, who slipped past the defense to beat the North Grenville keeper and take the win. CPHS Coach Kirk Belisle said a team effort sealed the victory.

“Our team worked as units taking their positions personally and working to win every ball they could,” said Belisle. This was the fifth title for the CPHS girls’ squad.

4 Tricks for Organizing Your Garage