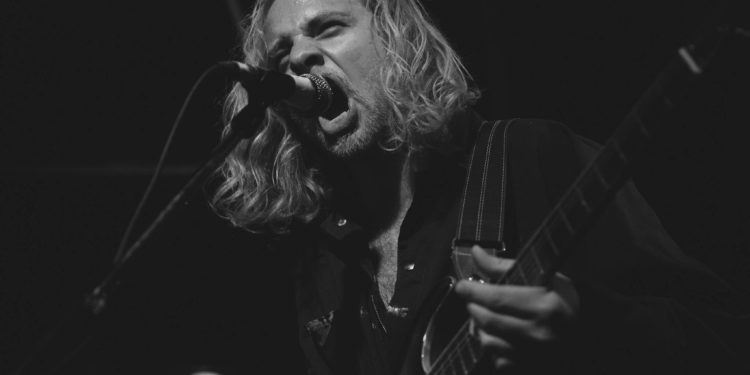 Blake Hawley is a name you need to know.

Born in America, but calls Montreal home, this musical savant has been making waves on the Quebec scene for years with his brand of feedback-swirled, crunchy rock-rattling riffs and seamless lush arpeggios.

And today, not only has he released a monster electronica EP, under the name Masochist, but his jazz-metal band, Gas Station Mentality, has signed with indie label Spuds Records.

Talk about a big day.

“I remember seeing those guys at Lolas” said Shane Preston, co-owner of Spuds Records, “…I had–

–this one song stuck in my head for a long time, and one day I realized, ‘oh it’s Gas Station Mentality’…I knew we needed to sign them”.

Experimental psychedelia meets jazz rock, Gas Station Mentality, packs a heavy punch, and is infamous for their live performances where Blake dresses up in a mechanics jumpsuit and goes all out.

“Every album is different…very open music, no boundaries, no set timings, …they have some really slapping tracks” noted Shane, “Jazz fusion or groove metal would be the best way to describe them”.

Continuing the trend on his latest side project, Masochist, Blake teamed up with–

–trombonist, Eric Quinn, to put together a self titled electronica EP that is phenomenal.

With Zach de la Rocha like vocals and the rich tones of Quinn’s trombone this EP speaks to a growing maturity in Blake’s musicianship and is a sonic exploration that while experimental, tethers itself to groove and rhythm making it accessible to the more traditional listener.

“The concept was really just to make an electronic record that was not limited by time, performance, or the need to recreate the songs live” commented Blake, “We knew we’d work on the bulk of the record remotely and we tried to use that to our advantage”.

To listen to the Masochist EP click here and for more info on Gas Station Mentality click here.

Why Staying Fit in Quarantine is Important