Announcing the Archdiocese of Ottawa-Cornwall 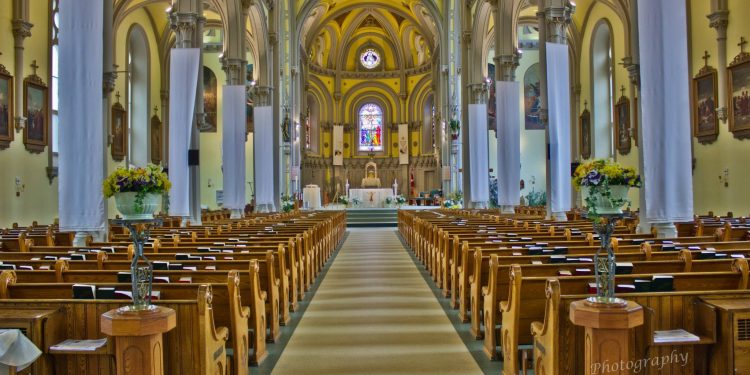 Today, May 6 2020, the Holy Father Pope Francis announced the official canonical amalgamation of the Diocese of Alexandria-Cornwall and the Archdiocese of Ottawa into one ecclesiastical circumscription, creating the new Archdiocese of Ottawa-Cornwall. The decree takes effect immediately. Civil fusion will require a law of Parliament and is not planned for several months.

A public announcement can be found at this LINK.

History of this Amalgamation
Archbishop Terrence Prendergast, SJ, who at the time was the Archbishop of the Archdiocese of Ottawa, was named the Apostolic Administrator for the Diocese of Alexandria-Cornwall on January 16, 2016. At that time, he was tasked with making a recommendation about the possible amalgamation of the two dioceses.

Over the next several years a series of consultations was held in the two Dioceses and a recommendation was sent to the Vatican in June 2017. This photo was taken at St. Francis de Sales Church in Cornwall at the first of a series of five public consultations, as reported at this LINK.

On December 12, 2018, Father Guy Desrochers, C.Ss.R. was named the auxiliary bishop for the Diocese of Alexandria-Cornwall.

In early 2019, a Transition Committee was struck consisting of key representatives of both Dioceses. Over the last year they have been meeting to discuss and work out the various aspects of uniting the two Dioceses into the new Archdiocese of Ottawa-Cornwall.

Commenting on his appointment, Damphousse acknowledged: “This is the beginning of a new chapter in my life, one that will build upon multiple experiences that have taught me to trust the Lord. … As Coadjutor Archbishop, I am grateful for the time ¡ will spend with Archbishop Prendergast. He will help me prepare for my new responsibilities, thus ensuring continuity with the wonderful work already begun. Both of us, together with the clergy and the laity, will form a good team capable of advancing the mission of Evangelization. … I will certainly have the joy of meeting again the faithful of my first diocese of Alexandria-Cornwall. The road we traveled together was short but very rewarding. Knowing that the reality of your diocesan Church is taking a turn by your amalgamation with the Archdiocese of Ottawa, I will be there to accompany you throughout the transition and in the integration into the new reality.”

His Excellency the Most Rev. Guy Desrochers, C.Ss.R., currently Auxiliary Bishop responsible for Alexandria-Cornwall, has been named Bishop for the Diocese of Pembroke.

The Diocese of Alexandria was previously renamed Alexandria-Cornwall and at that time Nativity Church was named as Co-Cathedral to Alexandria’s St. Finnan’s Cathedral (exterior photo).

There may be a desire to maintain some kind of Cornwall presence in this new two-point archdiocese. Since Cornwall’s St. Columban Church (interior photo) is the “mother church” of all Cornwall Roman Catholic churches and bears the countenance of a Cathedral, perhaps a decision will be made to name it as the Pro-Cathedral or Co-Cathedral?

[With material from the archdiocese]