by Ian Bowering
in Out and About, Travel, You May Also Like
Reading Time: 3 mins read
48 4 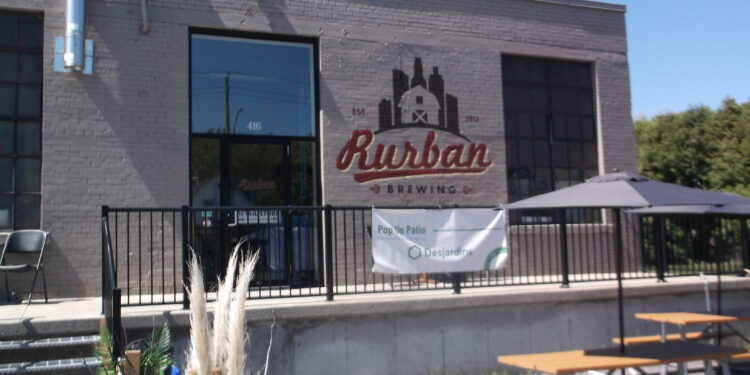 To combat this summer’s heat, I went on a beer tour of SD&G; an otherwise impossible quest until Rurban Brewing opened in Cornwall in 2013.

Historically, no Ontario community was complete without a brewery. Beer, for many European immigrants, was a staple. And for good reason. Before the big brewers came along, it was a natural product, with some healthy attributes.The craft breweries have returned the “goodness” to beer. To my taste, nothing can compare with fresh, unfiltered, non-chemical, non- industrial beer. Not even fresh bread!

Now find a friend to be your driver and let’s go.

Starting at Humble Beginnings Brewery’s patio in the Ingleside plaza, I ordered four samples for $8.50. Their Farmhouse SAISON ALE, had afresh aroma and chewy, full-body ,a great interpretation of the style.The KOLSCH with its soft mouth and smooth body just slid down my throat. Next I sampled the golden amber, mouth-puckering 65 ROSES IPA, which prepared me for dessert – their chocolate malt brewed oatmeal stout; a liquid chocolate bar.

Brewer Pierre Doucette’s philosophy is to give back to the community while “working hard and staying humble.”

Next, Rurban’s in Cornwall, where brewer Andy Rorabeck doesn’t seem to know how to make a bad beer. He follows an almost monastic dedication “…to making the best beer he can with the best skill set available.”

I took a table on the outdoor patio and started with SALTED LIME GOSE. Clocking in a 4.5%, this is a beer version of a session tequila. Amazing!

Next the ruby red ALT possessed a rich rye bread taste,and is an example of traditional German ale.

PASSION FRUIT PALE ALE, followed. In case you think this is an aberration, don’t worry. Brewers used to add licorice and even opium to their brews.With a full floral nose, it was like enjoying your garden without the weeding.

THIS IS OUR NAME IPA , 6.3%, has afresh grassy aroma;with its balanced body,it is a perfect IPA.

I finished with the SAAZ YOU, lager. A soft round aroma leads you into this generously hopped beer, with a soft finish, making it a lager with “legs.”

We then headed to Wood Brothers Brewing Co., in Glengarry. Sure we were lost, the brewery appeared as an apparition on the low ridge off the road. Boasting more people in the parking lot, than we saw in Alexandria, when I got in the door, I was greeted with “Welcome to the best beer in the world.” Overwhelmed with a flood of suds, I went for the AUGUST SUNSET, 7.5%. Infused with guava and red currants, this sour pink elixir was the beer equal of a Tequila Sunrise, and once I got through the creamy head, much more refreshing.

CITRUS DAZE, 5.8% has a rich creamy head, and the brewery’s cloudy generously hopped body. Brewing “hop forward” beers; if you are looking for balance in your mug, you are in the wrong place.

As good as the beer is, at $15.00 a quaint, quart bottle, it is a tad expensive, but at least I no longer have to go to Europe to get great beer as we have them here!

Visit the various brewery websites for hours of operation and directions.

Beer sampler Ian Bowering earned his Master’s from the U. of T. by tapping a keg of historic beer during his dissertation. Since then he has written four books about the Canadian brewing industry and received a Canada Council grant to travel to Europe to learn how to appreciate beer. Ian has taken part in the design of two beer museums, and has been a guest lecturer at Niagara College’s brewing school.

PSA - Beware of the video. Facebook Live user shoots himself on livestream, video circulates on TikTok.