by Editorial Board
in News and Announcements
Reading Time: 3 mins read
45 3 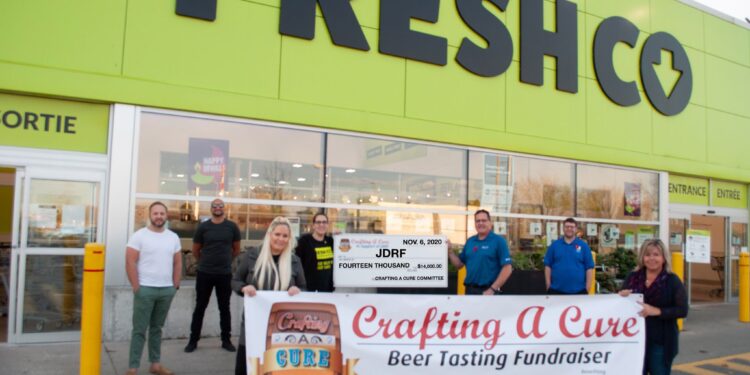 In a year like no other, the committee behind the popular Crafting a Cure fundraising event for the Juvenile Diabetes Research Foundation knew that the need to raise money would be greater than ever. With a physical event not feasible, the committee pivoted to a beer box format, with 200 up for grabs, with beverages ranging from craft beer, cider, wine and spirits, all donated thanks to the generosity of Muskoka Brewery, Big Rig Brewery, Grenadier Brewing, Perth Brewery, Camerons Brewing, Nickelbrook Brewing Company, Waterloo Brewing Company, Magnotta, Bruce Ashley, Mill Street Brewing, Sleeman, Corby’s Wine & Spirits, Diamond Wine & Spirits , Lakeview Wines, and Pommies Cidery. Each box also contained snacks, including goodies from local favourites The Happy Popcorn Company and Fairy Sweet, as well as from Pringles, Kellog’s, Vachon Cakes, Mondelez International and Pepsico. This year also included a virtual event, which featured music from Jeremy & Noah Baxter, Art Levert and Very Very, as well as a key note speech from former Humboldt Bronco’s captain and JDRF Ambassador, Kaleb Dahlgren. This virtual event can still be viewed on the Crafting a Cure Facebook page.

Thanks to the generous response from Cornwall & area, the CAC 2020 committee is proud to announce that the boxes sold out in four days, and over $17,000 was raised!

In recognition of the unique struggle facing local service clubs, as well as the use of their clubhouse as a headquarters for the beer box packing and distribution, the committee decided to spread the funds and donate $3200 to the Optimist Club of Cornwall, which will go directly to their 2020 toy drive. “The members of the Optimist Club of Cornwall are so happy to receive such an amazing donation that will be used to purchase toys for almost 100 children at Christmas.” Says Optimist Club President Terry Muir. “It was very generous of the committee to provide support for this important project especially when the demand is up this year.”.

The remaining $14,000 went to JDRF, the events traditional beneficiary. “COVID-19 has forced us to do more with less, the need to work together has never been more critical.” said Kim Lacombe, JDRF Executive Director for Central and Eastern Canada during the Virtual Event, “Now more than ever, your help continues our core work, is which fighting Type 1 diabetes and improving the lives of the ones effected by this disease.”

Bill Makinson, chair of the committee, took over three years ago from Founders Jeff and Cher Lalonde, recognizing the importance of the event for JDRF. “We were overwhelmed by the support from our community, as we attempted this new format due to the realities of COVID-19.” says Makinson, “This event doesn’t happen without everyone who rushed to buy a box, our hard-working committee, including Jordan O’Brien who secured all of the beverage and snack donations, and of course our sponsors.”

“While we hope to return to a physical event in 2021, this year proved that the community will always support us, and we are beyond thrilled to have raised as much as we did for JDRF, and to be able to support the Optimist Club’s toy drive as well.” says Makinson.

4 Reasons Why You're Not Getting Results From Working Out