by Louise Mignault
in Between the Lines, Opinions
Reading Time: 5 mins read 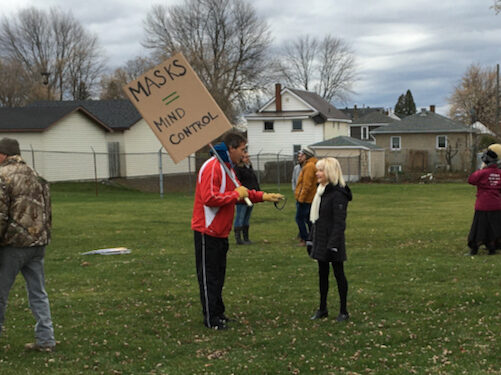 Today it’s an appropriate description of the freedom-from-tyranny-and-oppression-protest tactics. Twist the facts, deny reality and shout about it.

Like everybody else, I’m reading about the local “freedom” protests including the recent Standard Freeholder opinion piece “Praise for Cornwall police officers came as surprise at rally” by Todd Hambleton.

Even if it was an opinion piece, I feel like the focus of this article was in the wrong place. In fact, I’m not sure it has one.

Rally speakers and organizers SHOULD be thanking the police for spending hours out in the cold protecting their right to protest. And, if rally speakers do so, it’s also a politically expedient thing to do. The protest organizers DO NOT want to clash with the police – anywhere.

And, what does it have to do with anything really?

Commenting on how nice someone is to the police or to the homeless does not address the dangerous and irresponsible messages being spread by “anti-tyranny/oppression” groups. An attempt to equate someone’s real right to an opinion with an assumed right to spread misinformation based on non-existent expertise is just wrong.

And it’s debatably wrong to legitimize that process.

For example: Ms. Richer is the local organizer of the “freedom” protests plaguing our city of late. I do respond to some of her comments (to me and to others). At some point while we were debating the existence of Covid-19 or its mortality rate (something I should know by now not to do), she pointed me to a video by a Covid-19 denier “expert”. The expert in question was a PhD professor – in physics.

In discussing the viability of wearing a mask she responded, to someone else, “While ignoring the hundreds of thousands collectively world wide who are speaking out against these measures —- ALL HOLDING THE EQUIVELANT EDUCATION”.

Equivalent education is not appropriate education.  I would not want a Doctor (PhD) of philosophy and/or religion to take out my appendix. Would you?

The “anti-tyranny, anti-oppression” movement regularly affirms that there is NO pandemic; that Covid-19 is a simple cold or flu causing 60 million cases of illness worldwide resulting in nearly 1.5 million deaths in roughly 10 months of spread. Their websites, social media pages and speakers regularly manufacture or distort statistics, reiterate outdated information and frequently quote unreliable sources because they don’t how to evaluate the information and/or it does not serve their purposes.

They maintain that “mainstream media” is a biased propaganda machine wielded by corrupt governments and yet they quote the very same mainstream media as authoritative sources to prop up their case if an opinion or statistic happens to align with theirs.

This is all in addition to asserting that our government is out to get us, out to control us; out to kill us in collusion with governments around the world trying to do the same.

Give me a break!

In the face of overwhelming evidence on the dangers of doing so, they gather in large numbers, do not physically distance and do not wear masks. A number of them travel to Cornwall from other places that may have larger Covid-19 exposure.

While their “hugs over masks” slogan sounds harmless, if any of these maskless huggers happened to be infected with Covid-19 and has passed it on to be spread here or to their communities: they are directly responsible for illness, community spread and resulting deaths; all at enormous financial cost to everyone.

A worrisome trend in Canada and elsewhere is the utter repudiation of all facts, warnings and statistics that are reported on through mainstream media and their social media streams.

To wit, these protesters and their leaders fail to grasp that the doctor who is talking about his direct experience with Covid-19 patients, the epidemiologist who tells us of his data on the pandemic spread, and the government official who explains the availability of resources, have nothing to do with mainstream media beyond using it as a delivery vehicle for information.

Mainstream media IS mainstream because it is a reliable source of information that has balances and checks though independent reporting by a many correspondents from many media outlets. As well, I think most journalists seek real news. If they were interested in fantasy they could easily write fiction. It’s easier.

Not all governmental responses have been perfect. Nor have all medical approaches been effective. This is an evolving situation and one can always find examples of inconsistent and ill-advised measures both locally and further afield.

It IS important to question and highlight these issues; but not by spreading misinformation, unfounded conspiracy theories and paranoia as a way of getting attention to these situations.

I am writing to encourage non-protesters to express their opinions. Politicians are human and they pay attention to the voice of the people. Protest marches are noisy and attention getting. It’s important for politicians and government agencies – including the police, to know what the non-protesters are thinking because it helps guide their actions. One way to do so is by signing this petition.

If you don’t support the protesters, don’t let them speak for you.

5 Things to Do When You're Locked Out