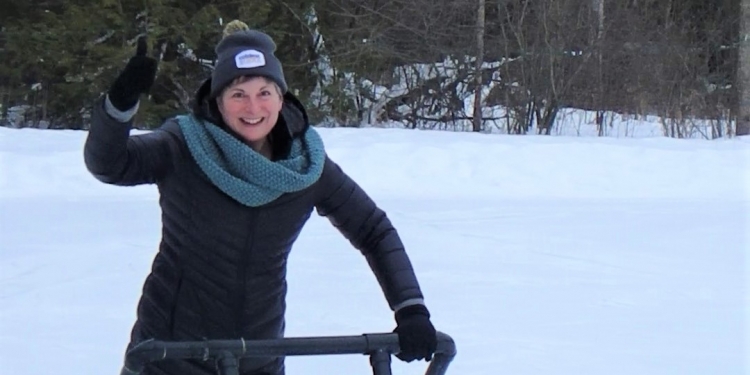 I am about to do something that is as Canadian as the pure maple syrup drenching my pancakes.   My skates are coming out of hibernation, the same pair of skates that have been hanging on a nail in my basement for years accumulating dust and cobwebs.  To my recollection, I have used them only once before to perform a single lap around the Benson Centre arena while holding on shamefully to the rink boards the entire time.  So why now?  There are two reasons really:  The first is curiosity to explore the ice trails in the woods that have become so popular in the last few years; The second is the fact that Countryside Adventures in Moosecreek have adult size “skating aids” which provide the means to make it happen.

I am glad we are a small group today because there will be fewer witnesses to my glorious debut and possible finale as an ice queen.  It’s not so much the embarrassment of being seen crawling around on the frozen ground that has been holding me back, but the fear of injury.  Let’s face it, ice is not fluffy white snow and when you fall, it hurts.  Also, for the same reason I don’t wear stilettos, I don’t fancy blades on my feet.  Both seem like intimidating weapons that can amount to no good.

Inside the cabin, feeling slightly on edge, I lace-up my old-fashion figure skates preparing myself for the ultimate Canadian experience.  I eventually emerge on wobbly legs making my way down the stairs slowly towards the walker-like contraption, hoping it will do its job of keeping me upright.   A modest audience consisting of my husband wielding a camera and a friend warming herself by the fire pit are there to encourage my efforts.

My first reaction is one of surprise as I start to glide much faster than I expected.  This is apparently due to a slight decline in the path itself.  I circle around a few times to test my stability and feel good enough to proceed.  Although my movements are far from smooth and rhythmic, I feel the fear melting away. Now I can appreciate my surroundings.  I love how the ribbon-shaped trail winds its way through the trees, the pristine landscape calming me as I glide along with care. Memories of my childhood resurface as I recall my father spending countless hours flooding our backyard rink at night.  Alas, my brother and I never really took to it.  Dad may not have made skaters out of us, but his effort and dedication were appreciated more than he will ever know.

Push and glide, push and glide…The skating aid has helped to enhance my venture into frozen territory by greatly reducing my fear of falling but I am tiring quickly from the foreign footwork. I take the short loop back to the starting point.  I am feeling proud to have risen to the occasion and perhaps even a little bit more Canadian.  I think there might even be a next time.