Duncan Calls Out Continued Chaos and Delays at CRA

by Editorial Board
in News and Announcements
Reading Time: 2 mins read
59 1 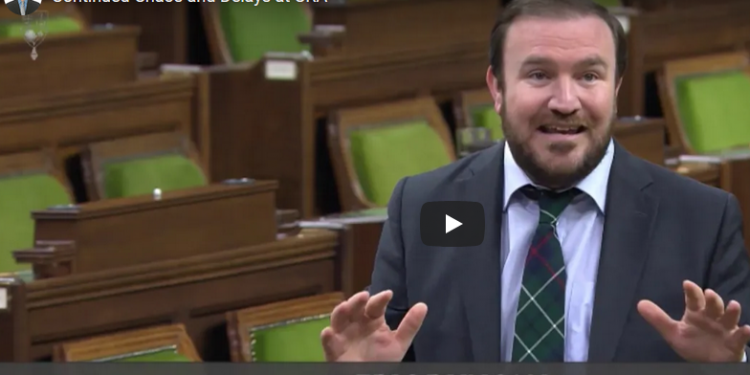 OTTAWA, ON – Stormont-Dundas-South Glengarry Member of Parliament Eric Duncan used an Adjournment Proceeding speech on Wednesday evening to address the continued chaos and disorganization at Canada Revenue Agency (CRA), and debated how the Liberal’s denial of the 2021 personal tax deadline until June 30th is contributing to a further backlog.

MP Duncan’s Constituency Office has been flooded with calls from frustrated constituents who have not been able to complete their taxes or connect with CRA by phone to obtain tax documents necessary to file.

Customer service levels at CRA remain inadequate during the pandemic. Duncan’s staff are also unable to get their normal case file assistance through their dedicated parliamentary contacts.

Numerous residents and tax preparers have also been commenting on the alarming amount of fraud cases taking place. Josée Sauve of Sauve Tax Services in Cornwall wrote to Duncan recently and confirmed her office alone is handling 50 local fraud cases at present.

“With this year’s tax deadline now passed, it was absolutely tone-deaf and unreasonable that the government could not have extended the deadline until June 30th,” said Duncan. “Last year, during the pandemic, they did so until September. This year, we are still facing lockdowns, and now CRA is trying to handle tens of thousands of fraud cases. Yet, they refuse to take a common-sense approach.”

“We have had hundreds of panicked phone calls from seniors and those on fixed incomes, who were booked to use our volunteer tax service, and we had to cancel them because they were told to stay home. Not everyone can do their own taxes, or even have a computer or internet. It makes no sense that there couldn’t be an extension to take the pressure off both the tax filers and the overwhelming calls for help into CRA.”

“The frustrating part is that there will be continued chaos in the months ahead for both CRA and Service Canada as people will miss getting their Guaranteed Income Supplement, Child Tax Benefit, and GST/HST payments on time.”

Duncan further questioned: “If the government can take two years to do their own federal budget during a pandemic, why couldn`t Canadians just have been given an extra two months to file their taxes- especially when they are being told they must stay at home?”