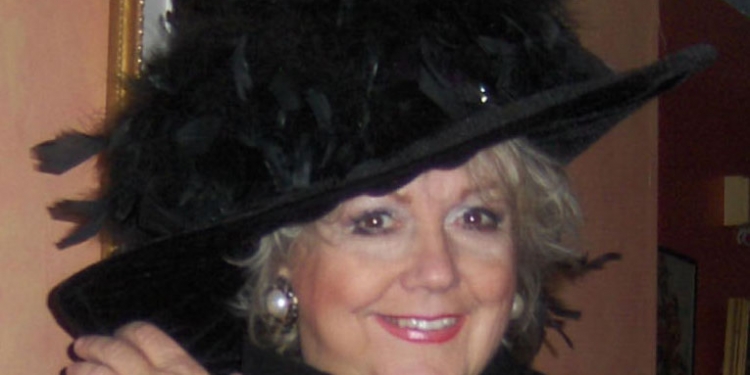 Here is the story from Lisa Gray from the May issue of the Cornwall Seeker – Enjoy!

“This Story came about on the suggestion of Artist Linda Lou Phillips whose creative talents and design teams put together the Birds of a Feather thematics of Cornwall’s Hall of Fame for the Arts Dinner & Gala.One of those creatives is Gail Howell. Dressed as a cat amongst a room full of birds Gail brings humility and a childlike wonder to everything she sets her hands to.”

When Gail Hamer was growing up in 1950s Longueuil, her mother wanted nothing more than for her daughter to become famous. To a rough and tumble tom-boy whose sense of humour bordered on extreme, Gail accepted the challenge as any true Libran would, in forging friendships with anyone who crossed her path.

Gail’s father Tom was known as a storyteller and all-round loyal friend. During the war, he served in the Canadian Navy as a Stoker, seeing action in the Battle of the Atlantic and the Battle of the Saint Lawrence. Upon discharge, Tom held a supervisory position at Canadian Steel Foundries Ltd. in Montreal, working in extreme temperatures through much of his career.

Gail’s mother Ruby had no middle name, because she was very ill at birth so there was no time to think of a second name. So when her mother passed away , Gail described her as Radiant, Unselfish, Beautiful and Young-at-heart. In truth, Ruby was a practical, well-grounded giving person. She might have also been famous.

Known for playing in an all-girls softball league in Verdun, called The Vic’s, Ruby was also a rower in the war canoe-club races which comprised of fifteen paddlers, each up on one knee. The race was not for the faint of heart but young women of that era who engaged in sport, shared powerful definitions of self which carried throughout their lives.

And it’s interesting to note that when the world went back to normal and Ruby & Tom got married, they would so pour the best of themselves and shine a light upon their children as they grew into wondrous versions of themselves, in everything they would ever do or be.

When Gail was very young, she met George Howell. Into her late teens, she received a tip that CP Rail was hiring office workers. With no formal education except sheer spunk, Gail got herself the job of a lifetime. She soon realized that not only did George – whom she had known for most of her life – ride the same bus Monday through Friday, but he also worked for the same train company.

With a generation between them, the two married at last. Life continued to get more exciting when the couple retired and began traveling. Gail always felt that George was too handsome to not be in the movies, and set forth to make him a star where he was cast as an extra in many films. For a switch, both appeared as extras in the film Norman Bethune, when on a break, the films’ lead- Donald Sutherland – pulled Gail’s name for a free trip to China. It was their trip of a lifetime.

Unlike most people who remember the Ice Storm of ’98, Gail lost her beloved George, and her family lost both parents, three months apart during that time.

Feeling that she’d run through all of it, Gail felt the support of her three brothers, many extended family and life-long friends. Taking her dad’s philosophy of learning to live through change, Gail continued to live out loud in the most incredible ways.

Accepting a job as a parking attendant, she began renting rooms. The father of her first boarder, a boy from Brazil, suggested Gail come there to visit them. In the cool ocean breeze and awesomeness of this foreign land, Gail realized that she really could explore the world on her own and be happy again.

In 2012 Gail moved to Cornwall, Ontario, joined The Newcomers’ Club and put down roots within the circle of tight-knit friendships fostered there. To those with condiment troubles, Gail runs the gamut in creating atmosphere. And for those who insist on fishing with her as their lackey, we say – ‘Come on in, make yourself at home!’

A huge passion and testament for this story, is the sheer volume of Gail’s role in the Arts Community and Volunteerism in support of charitable organizations and elder groups. In her own words as Mrs. Claus – ‘I pull the costume over my head and become at once, my mother’ – the brightest Ruby in the land.

So in the end, Ruby’s age-old wish shone through her daughter after all. As any matriarch knows, it’s easy keeping everyone in touch when surrounded with glittering imaginations, and a brush of greatness thrown in for spark.

CCH to Resume Some Elective Surgeries