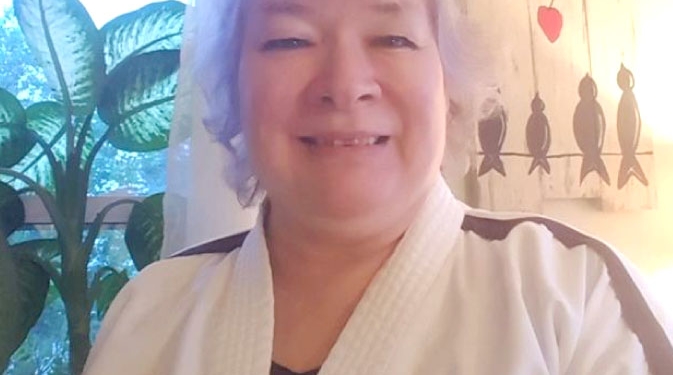 “Part of the process of interviewing people for stories starts with our childhood reflections of where we stood and what we believed. It’s interesting to note how a ten year olds perspective could so direct the course of one’s life towards service to others. In this, Betty Ann & I could be sisters”.

To the ancient Celts, the daisy is a symbol of innocence and purity. Synonymous with spring and found everywhere, one could liken a daisy to a slender girl with long fine hair. In a generations struggle with bullying, the daisies bear witness, bringing both light and life to darkened corners and whose countless mentors step forward and inward. Appearing stoic, their smiling faces belie the truth and quiet strength of their predecessors.

At a home that exists only in the memory of her mother’s kitchen table, the youthful spirit of Betty Ann Villeneuve stems a daisy-chain of everlasting love. Her mother Carol was a fierce go- getter, having originated from the small town of Sullivan, Quebec, where she served in the Canadian Air Force as a Radar Specialist, during the Cold War.

Betty Ann’s father Claude was from Dalkeith, Ontario. As a young father, he taught his children their time had value, while living by his motto ‘You’re only as good as your handshake.’ That honest wisdom may well be rare today, but as the family worked together in their home-based grocery delivery business, the cornerstone of strong family bonds was impenetrable.

When she was almost 15, Betty Ann joined the Sea Cadets. Excelling in First Aid, her superiors recognized an instructional leader and suggested she follow a career in nursing, so at 19, Betty Ann applied for the Licensed Practical Nursing Program at Algonquin College in Ottawa.

While raising her children, Betty Ann worked for the Community Nurses Registry of Ottawa when out of the blue she received a flyer in the mail offering children’s Taekwondo classes with flexible hours. She’d just turned 35 so the idea to keep everyone active was a simple one. With her mother’s guidance of believing in one’s own power, Betty Ann set her intentions to bloom.

Walking into her first Dojang, Betty Ann was struck by the familiar themes of a lifetime ago. As a newcomer to Martial Arts, she took the Student Oath to heart. The tenets of Taekwondo include the practice of courtesy, integrity, perseverance, self-control, indomitable spirit and respecting one’s instructors and seniors, to never misuse Taekwondo and be a champion of freedom and justice while building a peaceful world.

The co-ordination of social skills needed to envelope a learning path, is life-long. Feeling her instructors had their hearts in the right place Betty Ann approached her own students with courage and respect. In groups from ages 4 – 61, one’s ability to gain a student’s trust was garnered in letting them know they were not alone.

With light hearted teasing and gentle smiles, Betty Ann taught her kids to be thankful for their parent’s sacrifices.

Guided by the support of her original Taekwondo instructors in Ottawa, Betty Ann moved back to Cornwall and transformed her garage on Hoople Avenue into her very own Dojang. She named her school Freedom Taekwondo, as it would symbolize that one could be free from fear and stand tall. Even the family pet, a Norwegian Behund, was renamed Freedom. Along with her parent’s ideals and values, Betty Ann set about changing lives. https://www.facebook.com/CornwallFreedomTKD

Chances are if you’ve had school aged children, they’ve participated in Taekwon-Do. Everywhere you turn it’s inevitable that someone knows of or went to school with Betty Ann. Maybe you were a neighbour on Eleventh Street, or a grandmother who felt their confidence and soul renewed while acquiring a black belt under her tutelage. Of the many hundreds of young adults touched by Betty Ann’s guidance today, the truest honours grow from the benevolence of good seed and full sun.

Although Betty Ann’s dad never got the chance to watch her footprints run scatterings across his heart, the warmth and love from his energy was surely felt through the years. For when he passed, Carol got a job working nights, making tape on Rosemount Avenue with her sister Maggie and best friend Doreen. Thick as thieves, the women were known for their great work ethics, belly laughs and weekend game nights in a tradition that’s followed into second and third generations. And it gives us peace that although we can’t undo what came before, people like Betty Ann Villeneuve are out there in the garden, empowering kids young and old to revel in their weirdness and believe in themselves again. “Copyright © April 2021 – I would love to get feedback from my stories. Please email me at verlegrace4062@gmail.com

How To Choose The Ideal Electricians For Your Company Needs