by Editorial Board
in News and Announcements
Reading Time: 3 mins read
24 0 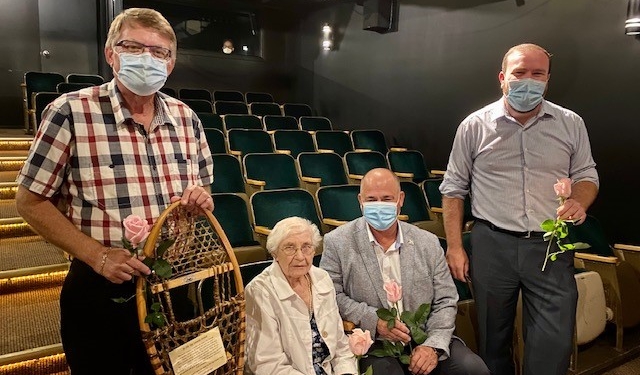 Elva Collingridge celebrated a major milestone with a selfless act.

She turned 94-years-old yesterday and spent the afternoon honouring her late son, Gordon Collingridge, who was awarded the To The Top Canada Award in 2008. Elva donated Gordie’s award to the Township of North Dundas, which plans to put it on display at the Old Town Hall in Winchester.

Gordie was nominated for the award by Rev. Thurland Brown, who couldn’t attend the event in person, but sent along a video explaining the background of the award. He read a book by Chris Robertson – founder of the award – and at the end readers were asked whether they knew anyone who made their community better, which in turn made Canada better.

“I immediately thought of Gordie,” said Rev. Brown. “In 2007, Gordie canvassed the entire town of Winchester for a well-known national charity. He made Winchester a stronger community and by making Winchester stronger, he made Canada stronger.”

“I called him the unofficial leader of the Winchester community watch,” joked MP Eric Duncan, who took part in the celebration. “There were not many days when I drove through Winchester – morning, afternoon or evening – when Gordie wasn’t around town. Every time we got the chance to speak, he gave me the latest updates. Gordie was a positive influence and this award is the perfect testament to that.”

“He helped anyone that he could,” noted Barbara Savary, who was instrumental in organizing the event. “In 1990, we established our first food bank in North Dundas and he was there as many times during the week as you would have him.”

“Gordie was a friend to everyone here in the village,” said Wayne Burns. “He visited us every day at the pharmacy – we were on his route. So I would say 300 days of the year we’d see Gordie…sometimes two or three times a day. It was so nice to see him get that award.”

Elva explained that it was Gordie’s wish to have the award given to some place in Winchester so that people could see it and remember him.

“So I, his mother, on his behalf, give it to the Old Town Hall for safekeeping,” said Elva.

The Township of North Dundas presented Elva with a certificate and pink roses in recognition of her 94th birthday.

A Great Lineup for the Cancer Benefit Concert for Gary Cooper, happening this Saturday August 21st - Do you have you tickets?