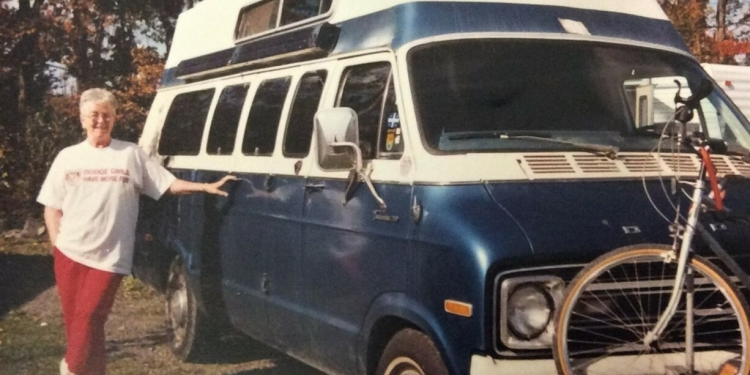 “I met Marion Barry on my way to the coffee shop. The next day, I asked to join her table because she was always smiling, and no matter what I said; had an absolute knack for turning ideas around for Good, and one day I had enough courage to ask if she was willing to partake in the Good Seed – Legacy Through Memories Project”

Along a twelve minute drive east of Saint John, New Brunswick awaits the cottage paradise of Treadwell Lake in Loch Lomand. Brimming with ‘40s Canadiana, the childhood memories of the Summer Place spark eternal for one – Marion Barry – as the eldest of six children, was most likely born with gills for she loved the water so.

Her parents met during choir practice at the Knights of Columbus. Marion’s mother Kathleen was a responsible, caring person as everyone was drawn within the shelter of her faith. A plain and simple woman, she loved a game of bridge and together with her husband, excelled for a time at making everyone feel safe.

Born with a song in his heart, Francis Barry was the only child of a carriage salesman who became a millionaire selling Caléche Brougham’s. Despite having to raise himself from his own bootstraps, Francis introduced his children to the magic of Christmas. Through the Arts, he gave the gift of music and a wild creativity wrapped in self sufficiency. He loved natural spaces and studying the bible with his family.

While Francis was studying at the University of Saint Josephs’ College, he had the opportunity to meet Brother Andre Bessette of Saint Joseph’s Oratory, when the elder was visiting the school. Like countless others before him, Francis described what felt like a bolt of lightning run up the length of his arm while shaking Brother Andre’s hand. Moved by this spiritual awakening, Francis felt enlightened with his own healing touch, discovering he was able to cure his children of their own maladies.

As a young person, Marion excelled at everything she put her mind to. She could bring the house down singing solos, ace at roller-skating and horseback riding but was ill at ease in social situations and held herself back. Despite her father’s influences, Marion’s deep fear of people and social settings was ever present until she applied for a sales job working at Calp’s Department Store.

A soft-spoken family man, Mr. Abraham Calp listened to people when they spoke. A recent immigrant to Canada, he was honest and could talk to anyone. Although we may never know the reason why Mr. Calp hired Marion, she felt that God was doing for her, what she could not do for herself. That someone could see beyond her shyness was life changing.

After a few years, Marion felt she was being groomed to become the buyer for women’s apparel but loved the job so much that she knew intuitively how to handle situations which used to baffle her. As many women of that generation, Marion lost part of her identity when she married and stopped earning her own money.

At 43, Marion returned to the workforce, supporting her children through a measure of prayer and earthly angels. Taking jobs which allowed her to be home with the kids, Marion knit sweaters and sold baking to makes ends meet. To stay up-beat, she started a new tradition by painting an accent wall a warm shade of orange in all the places she lived, as a meditation for good.

Finally able to thank her first mentor, Marion became a PSW with the Jewish Volunteer Bureau of Montreal, working in private care for 21 years for the people of Mr. Calp’s generation. In honour of all that he’d taught her, Marion grew the confidence to spread her wings and live again. She became a choir director, walking her parent’s spiritual path while inviting the music of life into her heart. Her service to others knew no bounds.

On an outing, she espied a converted Dodge camper-van for sale on the cheap and that was it! Wearing her true north, red & whites, Marion reacquainted herself with her father’s love of the great outdoors by camping under the stars for over 20 years. A favorite spot was Woodland’s Beach in the Long Sault Parkway where she was either in the water, reading or knitting a sweater – it didn’t matter – the fish had regained her moniker.

Seen by her friends as simply ‘Wonderful’, Marion has called Cornwall home during these 21 years. Walking the waterfront each morning, she sets a placemat on the table and asks God for what she needs. The gopher taps her leg to be fed while Marion counts her blessings and life lessons – grateful for the gift that her now grown children would never experience the crippling insecurity that once held her back. If Marion is young at heart, it’s because of that.