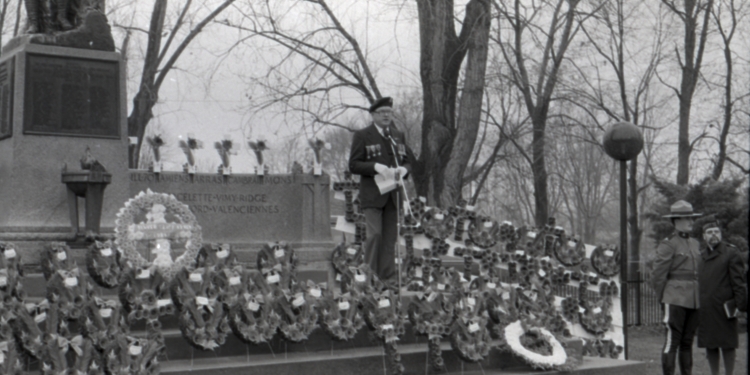 In 1784, modern Cornwall and SD&G were founded by citizen soldiers. During the War of 1812,Cornwall was even occupied by hostile American forces for a very short time. Since our founding, local citizens have had to prepare to defend their homes and country seven times. Twice, the selfless acts of local men and women led to the deaths of hundreds of its people.

On November 11th every year their sacrifice is remembered at the Cornwall Cenotaph, along with numerous similar ceremonies throughout the United Counties.

This year, subscribers to Netflix can get a glimpse at the horrific and brutal conditions local men faced in the film “The Forgotten Battle,” the struggle for the Scheldt Estuary. A composite depiction of the month long plus battle, which raged over a relatively large area, the film highlights the significant and decisive role Canadian Forces played in the battle. The film, however, does not specifically cover the ground the SD&G Highlanders fought over, even though the battle claimed the lives of at least 35 Highlanders, and the Regiment took more than 550 German prisoners.

To initiate the ceremonies, the vice-regal couple was given a tour of the Town by Mayor and Mrs. Snetsinger, along with a group of notables and a 104 man veteran’s honour guard and the Cornwall City Band. After inspecting the honour guard, the guests were taken by motorcade to inspect the new Montreal Road Courtauld’s plant, while the pipe band and guard marched to the site of the Memorial.

The tour over, Byng was welcomed to the Memorial by Town Clerk, J.G. Harkness.

Byng said: “I have heard with interest the history…of the district and the leaders it has produced; men who displayed the same qualities of endurance and courage which animated the magnificent body of men with whom I was so proud to be associated during the war – the Canadian Corps.(Byng commanded the Canadian Army in France) I shall…unveil the monument to those members of that force who gave all that a man can give in the cause of right, and I ask you to teach your children just what that memorial means.”

“It is not a mere piece of stone to be looked at and passed by.It is a reminder to all, not only of the heroism displayed by those who fell, but that their gallant spirit is just as much needed now as it was then, for without mutual loyalty and sympathy, the problems which are confronting Canada today can never be solved. See that your children learn this; see that they understand that this monument represents the ideal of true Canadian citizenship. And if they, in their turn, grow up to be good citizens, those who died will not have made their sacrifice in vain.”

The message was then repeated in French, after which prayers were offered by Monsignor G. Corbet, (St. Columban’s) accompanied by the playing of “Lead Kindly Light.” A second prayer was now offered by military chaplain James Faulds. Mayor Snetsinger followed this by announcing that there were over 80 names on the monument (belonging to men who had served primarily in the Canadian Expeditionary Force’s 2nd, 21st, 38th, and 154th Battalions). The speeches over, Lord Byng unveiled the monument, while bugler Peter Youmelle played the “Last Post.”

Inscribed “erected by the Citizens of Cornwall and suburbs in sacred memory of those who gave their lives in the Great War of Liberty and Justice, 1914 – 1918,” the closing prayer was offered W. Netten, Rector of Trinity Church.”

Architect Emanuel Kahn constructed the monument for the Thompson Monument Company of Toronto, at a cost of $10,000. ($156,000 plus today.)

The War of 1812 cannons, from Fort Henry were installed after the dismantling of Horovitz Park.

During the Second World War, Cornwall’s per capita contribution to the War effort through the Armed Services, industrial output and the community, was one of the highest in Canada.

Militarily, the SD&G Highlanders took part in the invasion of Normandy and the campaign in France, Belgium and Holland until the end of the conflict. Altogether, 183 local men died: ten sailors; 109 soldiers and 64 airmen. The toll for the United Counties was no less than 489 men and women.

The loss of life was just as tragic during World War I, which took the lives of at least 335 men and women throughout the United Counties, including 88 from Cornwall and Township.