ON ITS 75th ANNIVERSARY, THE DOOMSDAY CLOCK IS SET AT 100 SECONDS TO MIDNIGHT, SCIENTISTS CALL ON WORLD TO “TURN BACK THE CLOCK”

by The Seeker
in News
Reading Time: 7 mins read 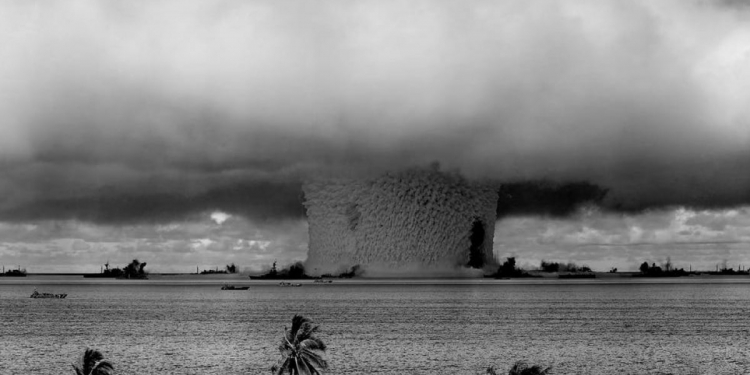 Clock Marks 75th Anniversary at Closest Time to Midnight in its History.

WASHINGTON, D.C. – January 20, 2022 – While the past year offered glimmers of hope that humankind might reverse its march toward global catastrophe, the Doomsday Clock was set at just 100 seconds to midnight. The time is based on continuing and dangerous threats posed by nuclear weapons, climate change, disruptive technologies, and COVID-19. All of these factors were exacerbated by “a corrupted information ecosphere that undermines rational decision making.”

“No one changes the world alone. We’re not all going to agree, but we have to work together. And together, we will get it done,” said Hank Green, New York Times best-selling author and science communicator, who closed the Bulletin’s live program.

On the 75th anniversary of its Doomsday Clock, the Bulletin is asking people to help #TurnBackTheClock. The challenge encourages people to use social media to share stories about the actions that inspire them and strategies of how we can work together to save the world.

The Doomsday Clock’s time is set by the Bulletin of the Atomic Scientists’ Science and Security Board with the support of the Bulletin’s Board of Sponsors, which includes 11 Nobel Laureates. For the past two years the Doomsday Clock has been set at 100 seconds to midnight, closer to midnight than ever in its history.

The Doomsday Clock statement explains that the “decision does not, by any means, suggest that the international security situation has stabilized. On the contrary, the Clock remains the closest it has ever been to civilization-ending apocalypse because the world remains stuck in an extremely dangerous moment.”

The Bulletin of the Atomic Scientists was founded in 1945 by Albert Einstein, J. Robert Oppenheimer, Eugene Rabinowitch and University of Chicago scientists who helped develop the first atomic weapons in the Manhattan Project. The scientists felt that they “could not remain aloof to the consequences of their work” and worked to inform the public and policymakers about man-made threats to human existence. The Bulletin was founded on the belief that because humans created these problems, we have the obligation and opportunity to fix them.

The Doomsday Clock was created in 1947 by the Bulletin of the Atomic Scientists to convey how close humanity is to destroying itself. Designed by painter Martyl Langsdorf, the Clock has become an international symbol of the world’s vulnerability to catastrophe from nuclear weapons, climate change and disruptive technologies. The Doomsday Clock is a symbol of danger, of hope, of caution, and of our responsibility to one another.

Rachel Bronson, PhD, president and CEO, Bulletin of the Atomic Scientists, said: “The Doomsday Clock continues to hover dangerously, reminding us about how much work is needed to be done to ensure a safer and healthier planet.  We must continue to push the hands of the Clock away from midnight.”

Sharon Squassoni, co-chair of the Science and Security Board (SASB), Bulletin of the Atomic Scientists, and a research professor at the Institute for International Science and Technology Policy at George Washington University, said: “One hundred seconds to midnight reflects the Board’s judgment that we are stuck in a perilous moment—one that brings neither stability nor security. Positive developments in 2021 failed to counteract negative, long-term trends.”

Asha M. George, DrPH, executive director, Bipartisan Commission on Biodefense, and member, Science and Security Board (SASB), Bulletin of the Atomic Scientists, said: “We can no longer afford to focus all of our efforts on other perils to the exclusion of the biological threat. If we do, diseases and the lives they take will push the second hand on the Doomsday Clock closer to midnight.”

Herb Lin, senior research scholar for cyber policy and security at the Center for International Security and Cooperation and Hank J. Holland Fellow in Cyber Policy and Security at the Hoover Institution at Stanford University, and member, Science and Security Board (SASB), Bulletin of the Atomic Scientists, said: “Technology has contributed mightily to an environment in which no conceivable evidence or rational argument can persuade true believers to change their minds, and the resulting fractures in our common understanding of what is true translate into a nation sharply divided against itself.”

Scott D. Sagan, PhD, Caroline S.G. Munro Professor of Political Science, the Mimi and Peter Haas University Fellow in Undergraduate Education, and Senior Fellow at the Center for International Security and Cooperation (CISAC) and the Freeman Spogli Institute (FSI) at Stanford University, and member, Science and Security Board (SASB), Bulletin of the Atomic Scientists, said: “[T]he Clock is not set by signs of good intentions, but by evidence of action or in this case inaction. Signs of new arms races are clear.”

Raymond Pierrehumbert, PhD, Halley Professor of Physics at the University of Oxford, lead author on the IPCC Third Assessment Report, and member, Science and Security Board (SASB), Bulletin of the Atomic Scientists, said: “The experience of a deepening crisis has animated protests and other civil society expressions of alarm this year. These actions focus public attention on climate change and raise its political salience, but whether they will transform policies, investments, and behaviors remains among the most important questions facing global society.”

The 2022 Doomsday Clock statement lists steps that should be taken to address the current threats.  Below are key recommendations to reverse the hands of the Doomsday Clock, which have been turned back before:

In conjunction with the Doomsday Clock’s 75th anniversary, the Bulletin will also be publishing a new book about the history of the Clock and its massive influence on science, politics, pop culture, entertainment, comics and art. More information about The Doomsday Clock at 75 is available at https://bit.ly/DoomsdayClock75book.