Did you know about …The Tunnels of Cornwall? 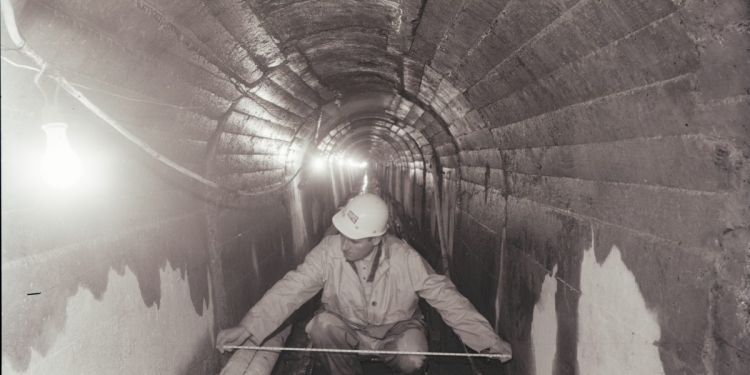 One stormy September night in 1866, the lone guard outside of the Cornwall jail retreated from the rain to his sentry box, allowing five incarcerated Irish American Fenian raiders to pop out of a tunnel they had been digging under the stone walls for a month. Once out, they scaled the wooden fence to find “…a boat conveniently awaiting them on the river, ‘permitting them to sail safely across the St. Lawrence to New York,’ much to the relief of all concerned (Fenian) Michael Murphy appreciated the waiting boat so he arranged for its safe return to its Cornwall owners. Few doubted that the escape had been contrived or at least winked at by the authorities.”

Unfortunately, no vestiges of this tunnel remain. However, rumours of a subterranean world underneath Cornwall’s streets have prevailed for decades. It makes sense – Cornwall’s 200+ year history of smuggling almost demands that there be some tunnels to satisfy the curious and conspiracy minded.

I have been assured numerous times that lower Pitt Street was linked by a series of underground passageways between buildings. Curious, I went into the basements of a number of Pitt Street establishments between 1st and 3rd, but found nothing. This month, Julia told me she had pictorial evidence of some sort of underground world.

The challenge was on: here is what I uncovered!

The City has numerous drainage tunnels, often built to divert or change the flow of Fly Creek, but so far I have not been able to locate any used for nefarious purposes. If you know of one, contact THE SEEKER! In cases such as this, there is nothing I enjoy more than being corrected!

The Pitt Street tunnels are culverts or trunked sewers all designed to control the water flow from Fly Creek. The main section of the tunnel crosses Pitt Street near COGECO.

Sorry, I have yet to find any evidence of anything but sewers on Pitt Street south of here. On the other hand, there could be some interesting structures underground along the street. The Pommier Parking Lot at Pitt and 2nd for example, has the remains of the old Sterling Bank vault under it.There is almost sure to be more.

There are more than 16 kilometres of tunnels under Cornwall’s streets.

Running from Brookdale to the Water Treatment plant on Montreal Road, through numerous public and private properties, this million dollar project employed over 300 people from 1966 to 1969.

Given a conducted tour of the main sanitary tunnel, Quenneville wrote:

“Straight down the Horovitz shaft of some 40 feet we went. Quite visible was a long stretch of horseshoe tunnelling on each side of the shaft. The size when completed will be four feet nine inches…A total of 19 manholes will be constructed. Every second manhole will be a working shaft…All arteries of the sanitary and storm sewers starting as far north as Eamers Corner’s will run into the Fly Creek sewer which in turn will hit the Brookdale South Line. Brookdale is a combined storm and sanitary sewer. Any heavy rainfall hitting this line will continue to the river when it hits Water St.”

“Fly Creek which is the main line flowing through the heart of the City starts at 9th St. and eventually connects with the Brookdale South sewer. Next year the Fly Creek line will be duplicated…”

Tradition maintains that some of the buildings on the south side of Montreal Road between McConnell and Marlborough were speakeasies/brothels and had tunnels patrons could use if there was a police raid.

Until the Canada Mill was destroyed by fire in 2010, you could see the remains of a raceway, just south of the Reach Plastic’s building, that entered a tunnel into the Mill, providing motive power for the original Edison electrical plant.All signs of this have been buried.

Now filled in, there were numerous utility and probably communication tunnels between mills on the property.

Residents around the site of the former East End fort on Belmont and Easton, claim to have seen old walls in the ground. If so they would not have been for tunnels, as the fort was too small for such expensive works, but substantial foundations could have been laid for the gun emplacement in front of the Windmill or for a powder magazine.

There are no tunnels, but the Mill’s property is honeycombed with sewers draining into the Canal along with innumerable smaller utility pipes. If my memory is correct, the presence of these sewers has hindered property redevelopment.

There is a now closed tunnel between Cornwall General Hospital and the Nurse’s Residence at the corner of Lawrence and 2nd St. E.

Ross Video and its CEO of Ukrainian Heritage to Donate $100,000 to Ukraine Humanitarian Relief Efforts, Sever All Business with Russia and Call on Other CEOs to Help

What about the tunnels from the armory to the old training grounds on 9th?

Thanks for the info., learning never ends! Ian

Northwest corner of St. Felix and Second at the intersection of the 2 sidewalks there was a cement block 6×6 type building that had a staircase within that went deep into the ground.

I heard by old school culeegs Citadel has tunel under school in basement and aperently one goes to the middle of football field.
I also hear the Library down town.

Under murphys inn goes on forever